Reporting on refugees during the pandemic in Egypt and Morocco

IJNet's parent organization, ICFJ, partnered with the Facebook Journalism Project on its Reporting on Refugee Communities Amidst a Pandemic Program. This article is the first in a three-part series highlighting reporting produced by program participants.

The COVID-19 pandemic has aggravated the challenges typically faced by refugees. As the world continues to claw its way out of the global health crisis, the responsibility journalists hold to report their stories has become ever more critical.

Across the Middle East and North Africa, journalists have produced high-quality, engaging reporting that shines a light on underreported aspects of what life has been like for refugees during the pandemic.

In this article we take a closer look at five examples in Egypt and three in Morocco of this critical journalism, which participants in an ICFJ-Facebook Journalism Project training program have undertaken — and the challenges they navigated during their reporting.

Freelance investigative journalist Shehata El-sayed reported an investigation called Egypt: Sexual Violence against Women Refugees on the Rise, which was published by Daraj Media in both English and Arabic. El-sayed recalled the extra care he took when reporting on the sensitive issue of sexual assault. “The first challenge was to find victims who would be willing to discuss what they have experienced,” he told IJNet. “Another challenge was to be able to support those victims psychologically. A third challenge was the difficulty of conducting interviews with the survivors during COVID-19, using remote communication.”

[Read more: Tips for reporting on migration during the pandemic]

Investigative and data journalist Mahmoud Eltabakh’s cross-media report entitled Coronavirus Prisoners: Refugees Seeking Life in Cairo, contains text, images, infographics and interactive maps. “The main idea of the story focused on monitoring the suffering of refugees from Iraq, Syria, Palestine and Yemen,” explained Eltabakh. “They came to Egypt fleeing from war and violence in their countries, and now they are confronting various hardships and difficulties in Cairo during the pandemic. At the same time, they are still clinging to their dreams of learning, success and stability.”

Investigative reporter Ayaat Elhabbal published a piece in Egypt Today called Coffee break: A Way for Refugee and Immigrant Women to Find Support. The investigation sheds light on how refugee women residing in Egypt supported themselves as businesses and organizations closed during the pandemic. Among the challenges Elhabbal faced during the reporting were difficulties obtaining funding, as well as reaching public officials to use as sources.

Journalist and researcher Mona Allam’s report, A Lonely Brown Childhood in Cairo: How has the Pandemic Affected Unaccompanied Migrant Children in Egypt?, focuses on the stories of unaccompanied children in Egypt. She also had difficulty finding first-hand sources willing to speak with her regarding such a sensitive topic. Allam added that collecting the amount of data for the report that she did required significant time and resources.

Journalist Mervat Abdalaziz reported a piece entitled The Stubborn Iris Scan: The Battlefield Between Refugees and Technology. Most challenging for Abdalaziz was communicating with official Egyptian government bodies and the country’s refugee agency to discuss the difficulties that refugees were facing, she explained. She surveyed refugees for her reporting, and her final product included both written and photographic elements.

[Read more: Social media in the Middle East: 5 things you need to know]

In Morocco, journalist Mariam Taidi produced a multimedia report entitled COVID-19: A Double Lockdown for Immigrants from Sub-Saharan Africa in Morocco. In her piece, she addresses the suffering of sub-Saharan African immigrants in Morocco, and their heightened struggles during the pandemic’s lockdowns. At the center of her reporting is the story of a migrant who sweeps streets in order to secure milk for his young son. To carry out some of the visual elements, such as photographing in public space, Taidi had to acquire a permit not typically available to independent journalists.

Journalist Salah Eddine Lemaizi’s report, Irregular Migrants: On Life in Exile and on the Margins in Casablanca addresses how young migrants from sub-Saharan Africa were experiencing an especially difficult winter, during which they had to contend both with security forces in the country and the COVID-19 pandemic.

Journalist Soufiyan Saaoudi produced an investigative report for the outlet, Let Your Voice Be Heard. His piece focuses on the stories of migrant and refugee women from sub-Saharan Africa who work in cosmetology in Morocco, and whose jobs were impacted during COVID-19. Saaoudi, too, noted that his reporting presented challenges in identifying sources who were willing to be interviewed and photographed. He coordinated with an association that works with migrants and refugees, in order to identify sources for his investigation. 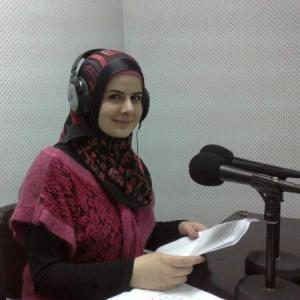