Jakub Włodek is a 36-year-old photojournalist at Gazeta Wyborcza, the first independent daily newspaper that launched after the fall of communism in Poland. Today he is in the western Ukrainian city of Lviv. “There are frequent bomb alarms in western Ukraine, but the moment you get used to them, you only move away from the windows,” he said.

Włodek stresses that he is not a war reporter, despite the environment he’s reporting in. He and his team are inspected several times a day by Ukrainian police, army and territorial defense forces. Old ladies will question them: "Where are you from, how long have you been here?" People are terrified, and they have reason to be. There are Russian saboteurs in Ukraine.

Włodek has registered the emotions of people from cities destroyed by the Russian assault, who after many days reached the relative safety of western Ukraine. They spill out of trains in Lviv, but they don’t know which way to go from there. There are not enough volunteers to assist the overwhelming number of refugees, to provide critical information and directions. The train station is packed, and the fleeing Ukrainians often must wait in line for hours before boarding trains to continue their journeys to Poland.

“We crossed the border in Medica, [Poland] on foot,” Włodek recalled. “We observed how the queues formed at 6 am, then we walked with refugees through border control to experience it.”

Trains wait for hours, and sometimes even days, between Lviv and the Polish border. The situation is tense and uncertain. “I register these emotions, and feel them myself. I get up close to someone only if I have to — only when the photo is worth it. I usually try not to disturb them,” said Włodek. “But Lviv is where I felt relieved. This is their penultimate stop, and there is hope.”

Adam Lach, 39, has had his photographs published in Polish magazines, The New York Times, and Le Monde, among other outlets. He has held exhibits across Europe, in Paris, Prague, Berlin and more.

Today he is frustrated that foreign media outlets — and not local newsrooms — are hiring the leading Polish photojournalists. “Photography by most Polish editorial offices is treated as an invalid element; they save money on photographers,” he said.

Since the war’s outbreak Adam Lach and his wife, Dyba Lach, a 30-year-old freelance journalist and podcaster, have been reporting from the Polish side of the Ukrainian border. Millions of Ukrainians have fled to Poland since late February — a development the Lachs have witnessed up close.

“When you are working, it’s easier to cope with emotions,” Adam Lach added. “Reliable media are vital to informing the world that something horrible is happening here, and the world reacts to these images.”

The ethics of his work is paramount for him: “You are faced with a moral choice. For example, when a crowd of mothers with children who are limping comes in, then you understand that this photograph can contribute something,” he explained. “Your behavior when taking such a picture is important, however — whether you step back and photograph from a distance, or whether you will be millimeters away from them.”

Dyba Lach described the constant balancing act: “Many people want to share their stories, but you might be the first person on this side of the world who will listen to them, and they may fall apart.”

She compared the border crossing to some strange festival: “There is a row of people who want to help refugees. There are sweets, toys for kids, and 15 types of cuisine stands from around the world. Only when they are fed and rested do we try to approach them.”

[Read more: Support and resources for journalists covering the Russian invasion of Ukraine]

"The wrong side of the border"

Jowita Kiwnik Pargana, a 42-year-old journalist for the Polish section of Deutsche Welle,  typically writes about E.U. legislation from her home base of Brussels, Belgium. Now she’s covering the Russian invasion of Ukraine conflict. She recently returned from the Polish-Ukrainian border, where she was reporting while also lending a helping hand.

“Everyone who comments on this issue should see and experience the border,” said Pargana. “I hear many voices in the West; some people think that Ukraine should give up, but they aren’t geographically and culturally close to Ukraine like we Poles are. I visited my mother, who lives in the hub of communist apartment blocks in Gdańsk, [Poland]; similar neighborhoods are being destroyed in Ukraine. If I were on the wrong side of the border, my family home would be razed to the ground.”

Refusing to let fear take over, Pargana organized a fundraiser in March to support Ukrainian refugees. In just two days she raised over US$3,000 from her network of Facebook friends. She purchased medical aid, sleeping bags and flashlights, and took them to the border with her.

“The hardest time is when I go back to Belgium. In Poland, I’m on adrenaline, I can’t sleep until five in the morning. Back in Brussels, suddenly everything becomes surreal.” 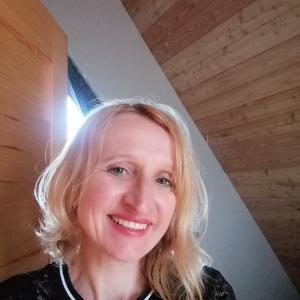 Agnieszka Burton is a Polish-Australian reporter and non-fiction writer.