For journalists battling censorship, focus on people, not politics

I’m a trainer and adviser at Kazakh TV, a government-funded station whose primary purpose is to broadcast 100 percent in the Kazakh language. Like other government-controlled stations, Kazakh TV is located in a huge fortress, Kazmedia, located in the very heart of Kazakhstan’s futuristic capital city. Just over a mile away are the Defense Ministry, Prosecutor’s Office and the Security Ministries. Kazmedia, it’s very clear, is vital to government control and authority – even the building security guards are sourced from the Interior Ministry.

When you walk toward Kazmedia, surrounded as you are in the Left Bank by thousands of other government employees, one naturally feels more like a loyal bureaucrat than a professional journalist. But a journalist in the U.S. is very different from a journalist at Kazmedia. Over here, the main function of a journalist is to be a transmitter – that is, you transmit the government’s opinions.

Despite this, in other ways Kazmedia reminds me a lot of CNN’s headquarters in Atlanta, where I worked for many years. The huge complex is modern and spacious — there are lots of shops, cafes and a company cafeteria serving up delicious food. Still, despite the modernity of the Kazmedia building, the Kazakhstan TV newsroom and edit bays feel underfunded and in general are in bad shape.

Reporters Without Borders currently ranks Kazakhstan 160 out of 180 countries on its press freedom index, behind Egypt, Iraq and Russia. In 2015, President Nursultan Nazarbayev was re-elected for his fifth term with 97.7 percent of the vote. This past summer, the country suffered a terrorist attack and significant protests over a land reform initiative, so some reporters I’ve talked to here say the government is feeling more tense than usual. In another worrying sign for journalists, in October the head of the Kazakh Journalists' Union and his son were sentenced to prison for tax evasion and embezzlement. Both deny the charges and say the case against them is politically motivated.

Picking your battles over government censorship

As an ICFJ Knight Fellow, my job is to train Kazakh TV journalists and do my best to share ideas to improve story production and newsgathering. Since I started my fellowship, I’ve helped produce two stories and I’ve tried to get the camera operators to be more aggressive and creative in how they shoot footage. I’m currently introducing Facebook Live to the station’s Facebook page.

This is the second time I’ve worked for a large state-controlled station in the former Soviet Union. A decade ago, I agreed to work at Russia Today as a reporter. At the time, the broadcast company was just getting started, and I was promised that they wanted to be independent and that I was to help them be like CNN or BBC. Today, of course, the outlet is Kremlin-controlled.

However, while I was an employee there, I was naïve and foolish to believe that the station truly wanted to be independent. So I fought the system and I fought the censorship. I proposed stories that I knew would test the levels of censorship and press freedom. I put up a sign in the newsroom that reminded my colleagues about the guarantees and rights supposedly protected by the Russian Constitution. And worst of all, I asked Russian colleagues to assist me in setting up stories that I knew were controversial and could potentially get them in trouble or worse. I didn’t get anyone fired, but I made some people nervous and some colleagues talked to me in whispers or behind closed doors. In short, working at Russia Today got weird and frustrating and very unhappy, so I resigned.

Going forward, I intend to apply lessons learned from my work at Russia Today to Kazakh TV. There’s a Russian saying, “The first pancake never turns out right.” I want Kazakh TV to be my second pancake.

Here’s my advice for professional journalists who are used to reporting in open environments and who end up working in places where the press is tightly controlled.

1. If you’re a freelancer or a foreigner embedded in a newsroom, remember you can leave at any time. For my Kazakh colleagues, this place is their home, their past and their future. They value the prestige and security of a good job in a very poor country. I have parachuted in, and I have a happy and good life waiting for me back in the U.S. I have no right to put anyone at risk of getting fired for pushing against the limits of censorship. Ultimately, my end goal is to work with journalists to produce stories that can better impact and inform their communities, without giving the government an excuse to crack down on them.

2. Focus like a laser on people. Give each colleague time and attention and treat each person with respect. Many of my co-workers here are already friends – in general, Kazakhs are very open and friendly. I knew when I decided to go to Kazakhstan that self-censorship is intense here, so I try not to get frustrated or worked up over the station’s biased newscasts, and instead focus on finding energetic, curious people who are eager to tell better stories. My fatal mistake at Russia Today was focusing too much on politics and not enough on people, which is why I’ve made up my mind to do the opposite in Kazakhstan. My mandate here is to teach and help people as best I can.

3. Maintain a sense of humor and try not to take things too seriously. If I expect things to get done here as they do back home I will lose my mind. As a tall American with long hair I’m a white crow (as they say in Russian instead of “black sheep”) and just dealing with regular life requires a lot of patience. I’m from a small town in the Arizonan desert –  just being here and working with journalists in this crazy place is pretty incredible and full of so many ridiculous moments. I try to embrace this and laugh at myself as much as possible.

4. Educate yourself on the local history and culture. Kazakhstan has suffered a lot – thousands of people were killed and the country’s environment was ruined in the mid-20th century. A normal life without catastrophe is a luxury for people in the former Soviet Union. They value stability and calm. Their history and experience is something that I as a foreigner will never fully understand, which means I cannot fully understand why the people and government act as they do today.

John Kluver is a veteran TV journalist who has specialized in covering Russia and the former Soviet Union for more than 25 years. Learn more about his work as an ICFJ Knight Fellow here. 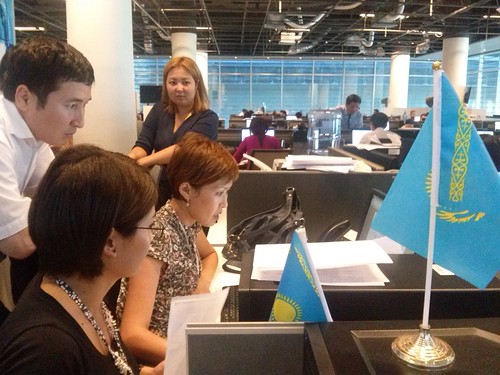