The French digital news startup Mediapart’s five founders — well known journalists from the venerable publications Le Monde and Libération — defied conventional wisdom of the time when they launched the investigative journalism site in 2008.

The media industry graveyard was already littered with examples of failed subscription models for online news. What’s more, investigative journalism was not seen as a commercially viable product. The thinking was it had to be subsidized by advertisers interested in being associated with news of celebrities, sport, and entertainment.

It turns out that the conventional wisdom was wrong. Mediapart succeeded gradually, and then spectacularly. In 2020, its model of independent journalism financed by digital subscriptions without advertising has triumphed.

In his annual report to the public, Edwy Plenel, co-founder and president of Mediapart, revealed that the publication had record growth at a time when traditional media were declining. In summary:

While the COVID-19 crisis caused advertising to plummet for print, broadcast, and digital news media, leading to layoffs and shutdowns, Mediapart added 26 new staff members. The total number of employees is 118, 69 of them journalists, along with 175 freelance contributors.

How their model prospered

Plenel attributed the growth to a public demand “for independent and thorough news reporting, one which does not succumb to propaganda and lies, in order to understand the unexpected events” of the day.

Also, by adopting a digital-only model of production and distribution, its costs were much lower, and it could adapt quickly over the years to changing distribution and consumption technologies, such as social media and smartphones.

Mediapart’s transparency about revenues, expenses, and ownership reinforces its claim of editorial independence, Plenel said. The company converted in 2019 to a nonprofit organization with no shareholders, the Fund for a Free Press.

Traditional media have tried to follow Mediapart’s model by converting to a model of digital subscriptions, but they still depend on advertising and government help, Plenel said.

He couldn’t resist taking a shot at his competitors: “Owned by wealthy industrialists, they benefit from handouts of subsidies from the public purse (which have been increased due to the coronavirus pandemic), and of which the most substantial amounts are given to the richest and most powerful among them; just as they also benefit from the funds paid out by the multinationals of the digital world (such as Google, Facebook and Microsoft).”

Mediapart’s success has not come easy. It has been sued more than 200 times for its reporting. Other media organizations have attacked it for revealing a dirty little secret about the industry: journalists and politicians have their mutually protective club of insiders who ignore the wants and needs of ordinary citizens.

Mediapart also fought the government for years to get the same tax rates for digital media as traditional media. Previously the government imposed a standard sales tax of 19.6% on digital media, compared with 2.1% for printed media. The digital media eventually won the day in 2014, and all of the press benefited. However, Plenel added with a tone of bitterness, “It cannot be said that the wider press showed any gratitude for our campaign.”

These battles required fortitude and high principles. Mediapart’s slogan could be the watchword for all news media focused on serving their communities: “The freedom of the press is not a privilege of journalists but, rather, it is the right of citizens.” 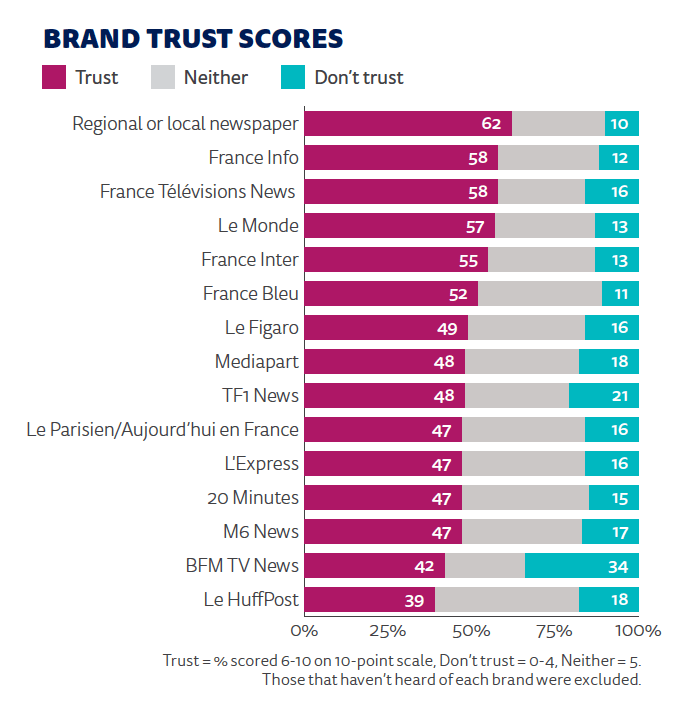 The results of this philosophy can be seen in the Reuters Digital News Report. Mediapart ranked 10th in France among the most popular online media. In a country where trust in media plummeted during the “yellow vests” demonstrations against fuel taxes, it ranked eighth among the most trusted brands in all media (graphic above). Not bad for a startup.

This post was originally published in James Breiner's newsletter. It is republished on IJNet with permission.