A young democracy developing under the threat of its powerful neighbor, Taiwan ranks 38th in the Reporters Without Borders Press Freedom Index. Among democracies, it also has among the lowest levels of trust in the media. Taiwan's media environment reflects its political landscape: it questions its ties with mainland China and is divided over its concept of the country itself. The result is an extremely polarized society. But some, especially the youth, deviate from the rule.

This article by journalist Alice Hérait is the first in a series exploring the theme: "Taiwan: a truly free media environment?"

Amid misinformation originating in China and pressure from the mainland on media owners in Taiwan, Beijing is waging an increasingly sophisticated information war against the island of 24 million inhabitants.

In the streets of Taipei, it is not uncommon to come across a local shop broadcasting the Chinese TVBS or CTV newscast. These stations do not reflect the policies of the Taiwanese government, which is pro-independence and was re-elected by a large majority in 2020. Rather, they attempt to show the rapid development of neighboring China, highlight opposition candidates who support stronger relations with China, and portray a negative image of Taiwan President Tsai Ing-wen, especially during election seasons.

In the name of democracy

China is attempting to infiltrate all Taiwanese institutions, and the media are not spared. With its goal likely being to annex Taiwan, which it considers part of its territory, China uses information war tactics to influence public opinion in Taiwan. For Chinese President Xi Jinping, the goal is to annex Taiwan without having to go to war.

To achieve this, Chinese media promotes unification between Taiwan and China as the best, or even only option. This entails, for example, portraying the island as potentially wealthier after uniting with the Chinese mainland, or pointing out the inability of Taiwan's government to provide adequate diplomatic services, and therefore unable to protect its citizens. The latter situation, it should be noted, is a result of China's refusal to recognize Taiwan.

Meanwhile, false information from China spreads on messaging applications such as Line or Whatsapp, or directly via the Chinese application WeChat, used by people in Taiwan who have professional or family ties on the mainland.

"Since in Taiwan censorship is a sensitive topic, any platform can be influenced," said Billion Li, project manager at Cofacts, a collaborative fact-checking platform started by the transparent governance project G0V (pronounced "gov-zero"). "As long as the Chinese or the teams they employ can spark public opinion discussions through marketing and public relations companies, they can divide Taiwanese people."

According to Li, 20 to 30% of the content Cofacts fact-checks originates in mainland China. "We find URLs and IP addresses from China, or simply messages written in simplified characters.” (The official writing system in mainland China, as opposed to Taiwan, where traditional characters are used.) Another 20% is ‘Taiwanized’ content that advocates for Chinese interests.

Misinformation on messaging apps, however, has limited leverage, especially when it uses language and script typical of the Chinese mainland. It reaches only the most vulnerable populations and already like-minded individuals. Unfortunately, though, misinformation is far from the only example of Chinese influence in the Taiwanese media landscape.

Originally a citizen's project, the G0V hacker community now collaborates with the Taiwanese government to combat misinformation from the mainland. This occurs as the ruling Democratic Progressive Party is taking an increasingly defiant stance toward China. In her speech inaugurating her second term in office, President Tsai Ing-wen emphasized the determination of her independence-minded government to fight the information war as an integral part of its national defense program.

In November 2020, Taiwan's National Communications Commission decided not to renew the license of Chung Tien TV (CTI). CTI is part of the Want Want Group, a Taiwanese food industry giant owned by tycoon Tsai Eng-Meng, whose factories are located primarily in mainland China. The group also owns the China Times, one of the largest daily newspapers in the country. By the end of 2019, CTI had devoted 70% of its broadcast time to pro-China opposition candidate Han Kuo-yu.

The Commission cited organizational problems within CTI, including the failure of internal discipline and control mechanisms. But supporters of the "blue" political camp (those in favor of stronger ties with China) decried censorship and denounced the decision as "politically motivated."

Want Want, which also owns CTV, is not the only media group with financial interests in China; the same is true of Taiwanese company HTC, which owns TVBS. But in Taiwan, where investments from the Chinese mainland are limited to a few sectors, Want Want poses a significant problem given it is a food company. "Unlike the electronics industry that has a rare technological advantage and can always decide to move its factories to another country, food companies are competing for Chinese government subsidies," Will Yang, a reporter for Taiwan's The Reporter, pointed out.

"Want Want Group media are clearly unofficial mouthpieces of the Chinese government," said a former employee who left the company in 2016. "I remember our annual Chinese New Year party in 2011. Chinese government officials would appear on video to give us their best wishes."

That same employee, however, noted that there is no evidence of the group receiving direct investment from China. "That would have been illegal," he said, adding that the explanation is simpler: "Tsai Eng-Meng is not a complicated person. He simply thinks that what is good for his company is good for Taiwan."

Another employee, editor of one of the group's newspapers, corroborated this statement by referring to the Tsai Eng-Meng's "political objectives." "I don't think [he] is directly in favor of unification. I think he just wants to maintain good relations with China. When certain news does not serve his interests, we just won't report it. Direct Chinese influence is very relative; we know where the red line is.”

Since Tsai Eng-Meng acquired the China Times, the paper has stopped publishing content about the Tiananmen Square protests, in addition to other censored topics in China. "I don't feel particularly censored in my day-to-day work," the same editor said, adding that much of the news reported is not about China or politics. "We may sometimes report news that does not give a good image of China. But when it comes to the Chinese government, we have to be careful."

It is difficult to refute the pro-China aspect of the group and the Chinese government’s indirect influence: "It is very likely that the CEO receives advice or direct restrictions from Chinese officials," said the editor. According to a 2019 Reuters report, some news stories were reportedly directly sponsored by the Taiwan Affairs Council, the Chinese agency in charge of relations with Taiwan.

The line between what could be spontaneously positive coverage of China, reflecting the opinions of part of Taiwanese society, and content sponsored by the Chinese government is increasingly difficult to identify. In Taiwan, the political landscape revolves largely around the island's ties to China. "The problem in Taiwan is that unlike France, which has a left and a right, our politicians argue about the name of the country, itself and we do not all want the same country," said Yang.

Photo by Frolda on Unsplash. 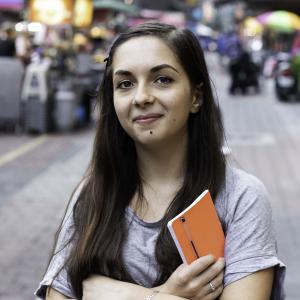