How Facebook and Google are capturing news traffic and advertising

It was the science fiction writer Arthur C. Clarke who wrote, "Any sufficiently advanced technology is indistinguishable from magic." And clearly many people think that way about applications for smartphones.

Mobile apps can show us detailed maps of most places on earth.

They can read QR codes that tell us when the next bus is coming to this stop.

They alert us to the scores of sporting events we care about.

They allow us to send text messages, free, to billions of people anywhere in the world (WhatsApp and WeChat users alone account for nearly 2 billion).

So we willingly give ourselves over to these services that do all these amazing things for us. Often we sign in to them using our Facebook or Google or Twitter accounts, thereby giving those social network platforms access to information about our preferences for products, who our friends are, where we are dining and how we are amusing ourselves.

And it is not just consumers who are handing over their information to these platforms. News organizations have become more dependent on traffic from mobile devices. The late David Carr wrote about the worrying aspcts of the trend last October.

He noted that more than half the traffic to The New York Times website comes from mobile devices and that Facebook's mobile app was responsible for a considerable amount.

What makes this dependence perilous for media companies is that Facebook and Google are constantly tweaking their algorithms that dictate which items gain prominence in their timelines and search results. Among the changes:

And it is not just traffic that they control. Google and Facebook control 70 percent of all mobile advertising worldwide, according to eMarketer. That's right -- 70 percent worldwide.

Joshua Benton of the Nieman Lab recently noted that Facebook is trying to persuade news media organizations to produce content specifically for its platform. No longer would Facebook wait for users to share news links; it would publish the news content directly and share the resulting ad revenue with the news publisher. (Matt Buchanan of the Awl explains how this model -- called distributed content -- works.)

Facebook has never shared ad revenue with news publishers before, so distributed content looks like a better deal for them, Benton said. But the flip side is that Facebook will know even more about the news publishers' audiences than they do themselves.

And it is this user information that allows Facebook to direct targeted ads that are more effective and thus command higher rates because they anticipate your needs and desires (a whimsical notion of the magic of this technology is in the cartoon at right). 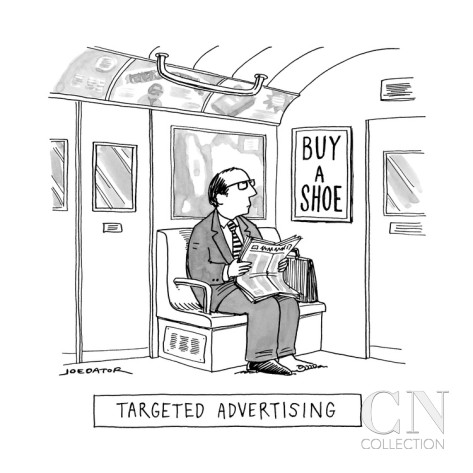 News organizations cannot hope to match the technology of social media platforms. The ones that have tried have failed.

The formula is not secret and it is not magic. The platforms have always understood that the value of their business is based on information about users. They have invested all their energy and resources into knowing the audience.

News media organizations have tended to look at their audience as mere consumers of their product. They produced information for users. But they did not see their audience itself as the product. So now, they have to rely on the platforms to reach their audience. The platforms are calling the tune, and they can change the tune when they like.