And the vision of Washington Post owner Jeff Bezos is that a news organization has to make its work available free, everywhere.

Bezos is urging the publication's journalists to adopt the principles of retail sales that he has learned over the years in running Amazon, America's largest online retailer of practically everything.

And the man who is putting that vision into practice is Emilio Garcia-Ruiz, The Post's managing editor for digital.

A fundamental concept in retail strategy is the sales funnel, Garcia-Ruiz said in his keynote address March 10 at the Digital Journalism Conference in Huesca, Spain. The idea is to get as many people as possible to sample your product (in journalism, it's through sharing in social networks), get them to pay for a product, and then make them repeat buyers for higher-value products. At each stage the pool of customers is smaller but spending more.

The key in a business sense, said Garcia-Ruiz, is to keep expanding that pool at the top of the funnel, just as Amazon has done in retail. And from a journalism perspective, the key is to merge the best journalism with the best technology to keep people coming back for more.

Garcia-Ruiz addressed the audience of 400 in his fluent Spanish, learned from his parents, both natives of Spain who migrated to the U.S. in the 1950s. [Although at times he had to ask the moderator for the Spanish words for some journalism terms, such as headline (titular), newsroom (redacción), and deadline (hora de cierre).] 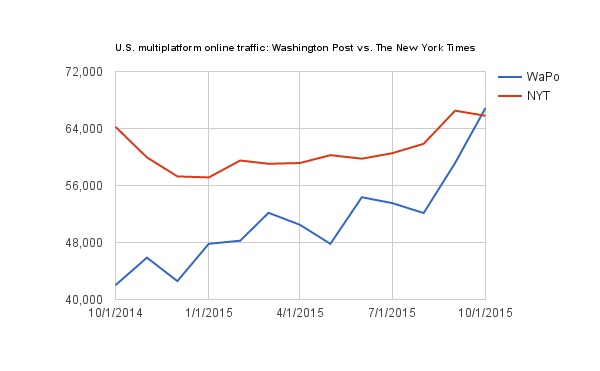 The Post has been criticized for adopting a BuzzFeed-like strategy of seeking viral sharing, in part by attracting traffic with sexy headlines. However, it works. Garcia-Ruiz and his staff celebrated passing The New York Times in total traffic in some recent months.

Among the new realities for traditional news media like the Post, said Garcia-Ruiz, are that the traditional models of journalism, represented by the front page and home page, no longer matter in the digital world:

For these reasons, The Post is embracing these new realities by designing its contents to be shared on social media and by reformatting its investigative journalism to display better on mobile devices.

Some consider this pandering to the audience or surrendering to the big tech platforms — Facebook, Google, Microsoft, Apple and others. Many in journalism are worried about the implications of the trend for the press in its role as the Fourth Estate, a counterweight to power, and a watchdog for society (a worry best expressed by Emily Bell of Columbia University in a recent speech).

At times we in journalism take ourselves too seriously, said Garcia-Ruiz, and this leads us to make mistakes such as writing boring headlines. It's not a mistake to write something popular, he believes. He gave as an example the story of woman whose husband in Australia hired some hit men to travel to Africa and murder his wife, whom he suspected of being unfaithful.

The headline in the BBC, "Spared by the hitmen with principles," missed the point, in his opinion — as did the headline in an Australian newspaper, "Man who had de facto kidnapped wife in Africa murder plot jailed in Melbourne."

Meanwhile, the headline in The Post made it the most popular story in the history of the digital edition, with 7 million page views: "Wife crashes her own funeral, horrifying her husband, who had paid to have her killed."

And what about the fact that this was not The Post's own story, but from a wire service? Again, The Post has no problem sharing wire stories from anywhere in the world on any number of topics, he said. Why not make this story as interesting as possible?

It's not a sin to be popular. It's not a sin to embrace the new realities. Especially since the old ways are no longer working. Garcia-Ruiz's message was clearly the most engaging and inspiring at the Congress, and he was swarmed by audience members after his speech. Many media organizations interviewed him. If you read Spanish, here is some coverage from other media: