“Collaboration is key for the success of whatever idea you have. Having people that are on board with you and that are looking to the same goal, that will take you very far,” said former Fellow Mariana Santos.

Fellows Mariano Blejman and Miguel Paz agreed with Santos about the importance of strong teams and partnerships. The three spoke on a panel at Media Party Miami this month and shared lessons they have learned from their experiences as media innovators in Latin America.

Learning to communicate the value of a particular product helped Blejman to fundraise and to raise awareness of the more than 20 journalism startups and tools that he helped to accelerate. He said it’s useful to always anticipate the questions that funders or external partners might have about a particular venture.

“Something very important I started to understand is how funders are thinking and what’s the value of the product you are adding," he said. "What’s different about what you have from other things in the market?”

Paz also said it’s vital to be clear in all communications with teammates and stakeholders. He recommended avoiding slang and industry-specific lingo to make sure information is understandable for people not from journalism, tech or design backgrounds. He learned to remain focused on explaining objectives, as opposed to processes, when speaking about improvements to his product.

“The biggest challenge of any venture is to connect the creative side with the production side and making it all work so everybody fits in the right space,” Paz said. He founded Poderopedia, a data journalism platform that maps the connections between businesses and politicians. He started the site in Chile and expanded it to Colombia and Venezuela during his ICFJ Knight Fellowship.

After an early shakeup in the Poderopedia leadership, Paz had to look for new team members who shared his vision for the platform. “A challenge is assembling a good team, especially with co-founders. It’s like a marriage, and I’m not kidding. (The co-founder) is the person you’re going to be living with almost more than your family … so you better do a lot of dating before making any commitment,” he said.

Blejman agreed it’s important to find a highly dedicated technical team leader. “The best teams that are found in the market in Latin America … have a very obsessive guy who will spend two or three days not sleeping because they know the technical product that they’re building is going to change the way that information works in their country.”

Santos founded Chicas Poderosas, literally “powerful women,” during her ICFJ Knight Fellowship. The network works to bring more women into newsroom technology and leadership roles. It now has more than 2,500 active members in Latin America, the United States and Europe.

Santos played a leading role in setting up the organization's first chapters, but she now relies on in-country Chicas ambassadors to lead the programs. The local leaders identify their communities’ needs, and they then collaborate with ambassadors from other countries to determine strategy and content for events.

“One person cannot know all of the communities. Every country in Latin America has its own community and then we have community leaders that drive training,” Santos said. “This is really about knowing your people and getting together to learn.” 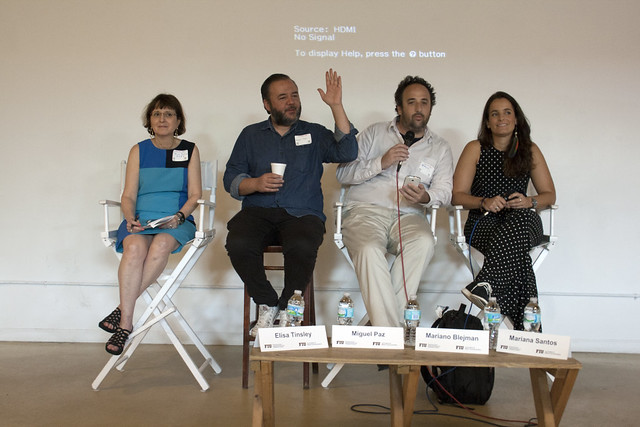