Four journalism projects that let the audience decide what to cover

Engaging with your audience while reporting a story or once it’s out in the world is one thing. Involving them in the conception of stories, well before the reporting has even begun, is another.

But more and more, news organizations -- from legacy to startup -- are taking this step. They’re including current and would-be users in the process of newsgathering earlier than ever before, as they figure out what to cover and how.

The tactic turns on its head the traditional belief that news organizations know best when it comes to what journalists should spend their time covering. The community that’s being covered can play a role in deciding which questions to ask, what to film and where to focus the angle of a story. In the process, newsgathering and dissemination becomes incredibly inclusive, transparent and proactive.

Here are four examples of journalistic endeavors or outlets that have taken unprecedented steps in letting readers in on story selection:

Curious City is an experiment out of Chicago’s public radio affiliate WBEZ, which tells its listeners that the initiative is “designed to satisfy your curiosities.” Basically, anyone can pose questions about Chicago and its neighboring region -- including the people, sights and little-known facts within it. Then the public votes on the questions submitted. The winning questions become the basis for reporting by WBEZ staff. Once staff uncover the answers, they turn them into podcasts or blog posts that help residents better understand their geographic home.

The nearly 100 episodes cover subjects that probably wouldn’t be unearthed or analyzed otherwise. For instance one listener’s request became an exploration into pinball’s hold on Chicago; another’s the prohibition of car sales on Sunday. Curious City also has covered more serious fare like pedestrian fatalities and demographic shifts such as an influx of German prisoners of war following World War II. 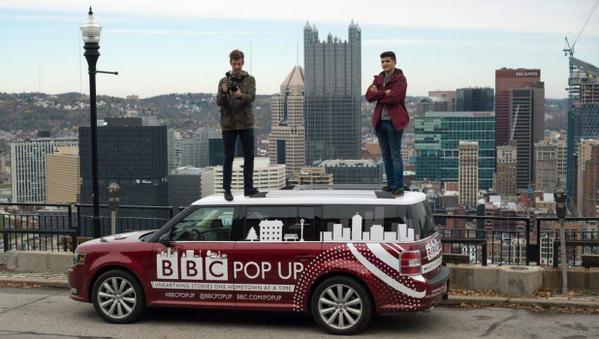 BBC Pop Up was a road-tripping mobile journalism unit that, for six months, criss-crossed the United States in search of untold

stories. The small BBC crew of photojournalists spent a month apiece in six different American cities. Perhaps even more novel than the overall idea -- which was pretty novel -- was how they decided on their reporting activities once on the ground in places including Pittsburgh, Pennsylvania and Tuscon, Arizona. Quickly after arriving the team would hold a community gathering to assemble residents in one place, alert them to what they were doing and ask for story ideas of what they’d like the BBC to cover during that month.

From that approach, the PopUp crew arrived at a host of unique journalistic offerings, from an examination of Pittsburgh’s enduring air pollution problems to a glimpse into how glassblowing is keeping kids out of gangs in Tacoma, Washington.

Some stories took the form of videos, others magazine features. Either way they were largely crowd-generated from their very conception.

The Minneapolis Star Tribune has an ongoing series that began this spring called "Minnessentials.” The newspaper’s aim is to explore Minnesota traditions -- including, yes, meat raffles -- but instead of simply writing about them, the staff is asking for input during each installment. Editors provide a call to action, asking for topics that the Star Tribune should profile. Then, using those suggestions they come up with the stories and seek specific examples to include or highlight, and readers can tweet back with their thoughts.

So far, “Minnessentials” has delved into the tradition that is preparing and serving hot dish, the state’s take on a casserole, and profiled a legendary fish fry that’s gone on for generations.

Not a single news organization itself, The Public Insight Network is a platform that’s enabling a host of individual journalists and news organizations to connect with the public as they dream up article ideas and write about communities.

Members of the public are able to sign up to share knowledge and insights with journalists. When they become official sources on the platform, they’re aligned with a specific area of expertise. From there, journalists can email them for their thoughts on topics as they’re formulating story ideas to research.

PIN’s leaders describe the platform as a “useful source-finder on deadline. But it’s most powerful when used early in the reporting process to test hunches, unearth angles, provide important context, even reveal the right questions to ask in the first place.”

For instance, the Miami Herald is using the network to get the word out about one of the paper’s ongoing features called “Community Conversations.” In it, editors tap residents of Miami about their thoughts on a fairly broad topic such as homelessness and then use the feedback as the basis for the post.

What are other, similar efforts are out there that inspire you?