Some of the tactics used by populist presidents include taking over independent media, troll campaigns to discredit journalists, legal harassment of publications, public trashing of specific journalists and orchestrated threats of violence, roundtable participants said at the International Symposium of Online Journalism, hosted (virtually) by the University of Texas, Austin. They went on to discuss how media are dealing with these threats. 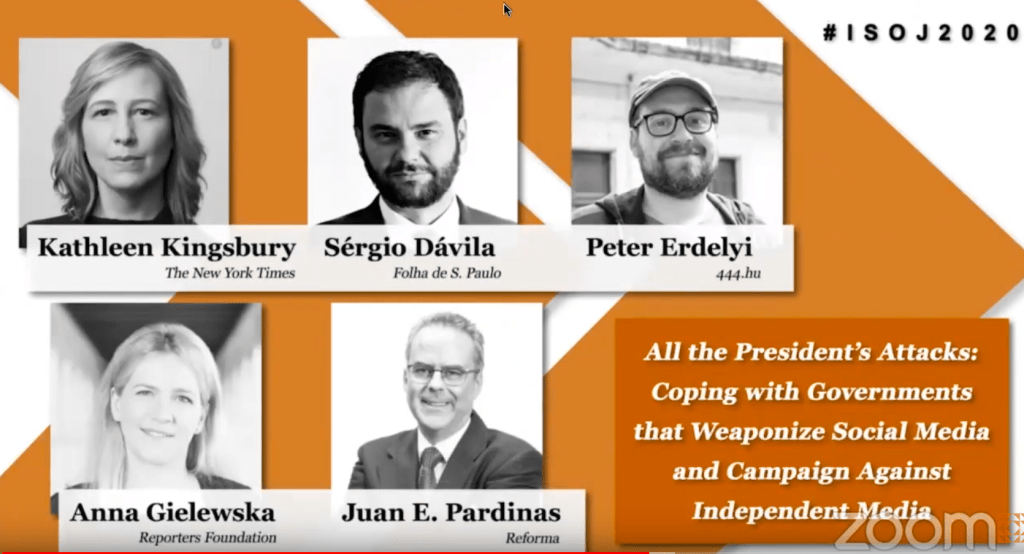 Sérgio Dávila of Folha, Brazil’s largest and most important independent newspaper, said his publication had a history of revealing the corruption of Jair Bolsonaro and his family, even before he became president of the country in 2018. As a result, Bolsonaro regularly trashes Folha during public appearances.

After reporter Patricia Campos Mello revealed how Bolsonaro and his supporters used WhatsApp — Brazil’s most popular social network with 100 million users — to spread misinformation about a political opponent, they began a smear campaign against her, using doctored photos with sexual innuendoes.

Folha has also been the subject of 4 million attack messages on Twitter, with 80% of those coming from conservative allies of the president, Dávila said.

Getting stats about COVID-19

Bolsonaro’s war against independent media has become more relevant during the COVID-19 crisis, in which Brazil has had one of the world’s most severe outbreaks according to the World Health Organization. Bolsonaro has dismissed the danger of the virus and has blocked access to information about deaths and infections.

As a response, Brazil’s leading media have banded together to develop their own daily statistics by compiling data from on-the-ground sources. This collaboration is a first for the country’s highly competitive news organizations, Dávila said.

Other strategies Folha adopted to defend itself are: training for staff on how to protect themselves and respond to threats, creating a free online course for young people on the practices of the military dictatorship from 1964-1985 and launching a digital subscription campaign to replace lost advertising revenue.

[Read more: Lessons learned reporting on the pandemic in Brazil]

In Hungary, media are captured

The independent media are in a much more precarious situation in Hungary, said Peter Erdelyi of 444.hu. There, Prime Minister Viktor Orban and his right-wing Fidesz party have steadily eroded independent media since coming to power in 2010.

Powerful oligarchs aligned with the party have acquired 18 independent newspapers in recent years. The government now controls a network of 476 print, radio and television news outlets.

Erdelyi’s publication was launched in 2013, and it had monthly visits of from 14 million to 20 million since January, according to SimilarWeb. It has been highly critical of the government, which has responded by blocking the publication's access to public officials and public documents.

In Hungary, government-funded smear campaigns are outsourced to trolls, staff members are smeared and the official government pronouncement is “independent media is a ruse,” said Erdelyi.

His strategy has been to engage in a campaign to educate the public about the role of independent media and how it serves the public at large. At times this has meant going into the lion’s den. He has publicly debated members of the regime on a television program moderated by a hostile host.

“We might persuade some people from our shared audience,” said Erdelyi.

Anna Gielewska, vice president of the Reporters Foundation in Poland, has just finished a year’s fellowship at Stanford University, where she studied how populist regimes around the world are working together.

“Populists are more effective at stirring up fear and anger and manipulating the public,” she said. They fill social media with conflicting messages so that the public doesn’t know who to trust in the media.

In her native Poland, Gielewska fears that the recently re-elected conservative president, Andrzej Duda, will follow the Hungarian playbook. The government is threatening to nationalize independent media and eliminate foreign ownership, particularly from German media companies.

She believes that media should adopt a prime tactic of the populists: more international collaboration. Independent media should work together to publish stories suppressed in one country so that the facts can reach the international community. One clear example she mentioned was the Organized Crime and Corruption Reporting Project (OCCRP).

Among other tactics she identified:

In Mexico, the president’s No. 1 enemy: the press

Juan E. Pardinas, general editorial director of the Reforma newspaper group in Mexico, said that when Andres Manuel Lopez Obrador won the presidency by such an overwhelming margin in 2018, he neutralized his political opponents. He needed a new enemy, and he found one in the press.

During his first 20 months in power, Lopez Obrador (better known as AMLO), singled out Reforma for criticism 200 times, said Pardinas. The president refers to “la prensa golpista,” which translates as media seeking to overthrow the government.

“AMLO says we are trying to destroy the democracy,” said Pardinas.

The Mexican government, under whichever party, has long been the biggest source of advertising revenue in the country. The government traditionally steers advertising revenue to friendly media and pulls it from those that criticize the powerful. One friendly outlet received US$18 million in ad revenue last year, Pardinas said, without naming it. This revenue flow stifles independent voices.

In some ways, comedians who satirize the president have an easier task than journalists, Pardinas said. The comedians can simply make fun of the ridiculous, misleading or false statements coming from the government. Journalists, on the other hand, must first report the official statement and then show why it is not true. By then, people aren’t even listening.

These platforms are reaping tremendous ad revenue, but much of their content is patently false and defamatory. Unlike media organizations, the platforms do not have legal responsibility to police their content in most countries.

Dávila said WhatsApp is “dark social media” in Brazil because you can’t track content to its ultimate source.

Erdelyi is not enthusiastic about putting the government in charge of policing lies on social media in his country since the government itself is a prime source of misinformation and disinformation. He does favor, however, the policing of “inauthentic behavior,” in which political actors hide behind fake personas and avatars.

Kingsbury sought to end the session on a positive note. The panelists obliged her by affirming their commitment to serving their communities with trustworthy news and information, despite the attacks on them and their staffs.

Dávila said journalists should not position themselves as opponents of those in power, but, “We must act without fear.” He finished by quoting Washington Post Editor Marty Baron: “We are not at war. We are at work."

This article was originally published by James Breiner on his blog, "James Breiner: Entrepreneurial Journalism." It was republished on IJNet with permission.