This platform ensures work benefits for freelancers in Latin America

Brazilian journalist Diane Ziemann was working at a local newspaper in 2013 when she found out she was pregnant. It was a high pressure job, and Ziemann often worked long hours as she took on many different roles in the newsroom. It was not the place for a soon-to-be mother, she thought.

"I was officially an editor but I was piling up work duties because the newsroom consisted of [just] me, basically," she said.

As soon as Ziemann found out she was pregnant she decided to quit and become a full-time freelance writer. With a baby due in a few months and no benefits to support her now, she had to organize herself financially.

Ziemann freelanced throughout her pregnancy, stopping only for about a month after giving birth. She received no paid maternity leave; instead, she split her time as best she could between caring for her newborn and continuing her freelance work.

Today, more and more media professionals in Brazil are turning to freelance work. In fact, three in 10 Brazilians work autonomously, a number that grew for the fifth year in a row in 2021, according to a study by Fundação Getúlio Vargas. Freelancers, however, lose access to valuable benefits like paid maternity leave, and vacation, which they would otherwise receive through full-time employment.

Enter Free the Freela, a Brazil-based startup seeking to ensure that freelancers can still receive these benefits as part of their compensation. Started by Sarah Lucena in 2020, it also strives to provide a safer, fairer, more sustainable platform for finding, offering and accepting work.

[إقرأوا المزيد: Should journalists ever write for free?]

Free the Freela requires a signed contract for any work arranged through its platform,  protecting both the freelancer and the client. For every job picked up on the platform, Free the Freela charges the client an extra 10%, which is allocated to a fund for benefits. Freelancers who have carried out no fewer than 12 jobs through the site over the course of at least six months qualify to receive benefits.

Freelancers can take paid vacation twice a year, and the parental leave can be used once annually. The parental leave benefit is proportional to the work the freelancer has picked up on the platform. Free the Freela allows equal amounts of parental leave to mothers and fathers alike. It also covers adoption and surrogacy.

By facilitating reliable contracts and promoting fair compensation for work, the platform hopes to become an alternative to popular hire-on-demand platforms, like UpWork and Fiverr, which Lucena believes have led to an undervaluation of freelance professionals.

"The idea is to also bring these Latin American talents closer to better budgets, as a European budget, for example. The client pays in [their] local currency and the freelancer decides on what currency [they] want to be paid in," she said.

Free the Freela also has targeted clients in accelerated periods of growth, such as startups and organizations expanding operations abroad. They serve clients who work, for example, in The Economist Intelligence Unit, the research and analysis division of The Economist group.

[إقرأوا المزيد: Tips for succeeding as a freelance journalist]

The future of freelancing in Brazil

When Lucena began building a team to help her create and run Free the Freela, she found that countries across Latin America — Chile, Argentina, Uruguay — are also increasingly moving toward freelance work. "Many people see it as a trend, but it is actually a reality," she said.

In Brazil, even for workers who are employed full-time, conditions have worsened in recent years, due to labor reforms that have failed to improve terms for workers. "This process of dismantling labor laws leads many people to no longer see perks in formal work contracts. It doesn't make sense anymore, but at the same time the other option, which would be freelancing, is still not right," said Lucena.

Still, the Brazilian entrepreneur is optimistic about what freelance work affords professionals when conditions are set right. "This more flexible work format allows one to experiment working on different things for different clients, but also affords them the freedom and autonomy of being able to build a life that is no longer focused on the corporate world, which still holds outdated practices," said Lucena.

Free the Freela was recently selected for an acceleration program with the Founder Institute and received an investment from AI Global, a European investment and financial services company. Lucena plans to use the funds to expand the technology and product teams to optimize the platform's service. "Our plan is to consolidate ourselves as the go-to platform for experienced professionals in Latin America," she said.

This article was updated on April 28.

Photo by Isabela Kronemberger on Unsplash. 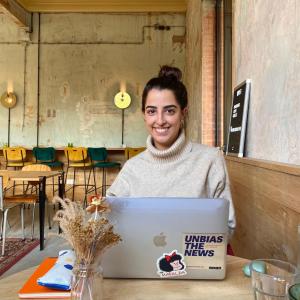 Laís Martins is a Brazilian journalist based in São Paulo, from where she reports on politics, technology, human rights and gender for national and foreign media outlets.