Risks and rewards of native advertising

In the last blog post I laid out the reasons why independent news media organizations need to hire their own salespeople. This way they avoid giving up ad revenue to tech platforms. They also offer advertisers a safer environment.

Although publishers sell conventional ad spaces like the platforms, many quality-news sites are offering something different — native advertising. So, in this post I’m going to tell you what’s different about native advertising, how to make mission and monetization work together, and what some of the risks are.

News of a different kind

Native advertising — also known as sponsored content or advertorial (publireportaje in Spanish) — mixes characteristics of editorial content and advertising. It has become a major revenue source for many independent news sites. As described in the Tow Center’s Guide to Native Advertising:

“Native ads take on the appearance of real news stories, and are crafted by people inside news publications who want to create and spread commercial messages that don’t look like traditional advertisements that overtly push product . . . . [T]his practice borrows credibility from the newsroom in order to enhance the value of the ad created for clients.”

- The Tow Center, The Guide to Native Advertising

In some cases, the native advertising content is similar to high-quality journalism; sometimes it is crassly commercial, which can affect the credibility of the publication. More on that later.

Here is an example from The New York Times that falls on the higher-quality end of the spectrum.

Netflix paid The New York Times to publish this article about women inmates to promote its fictional series about life inside a prison. The article looks and feels like the kind of in-depth reporting you might see in the newspaper, but it was not produced by The Times‘s editorial staff.

A click on the phrase “paid post” tells the reader that the content was produced by the publication’s internal ad agency, T Brand Studio. The only other clues that this article is really an advertising message are the tiny ad for the Netflix series to the left of the headline and a large horizontal display ad announcing Season 2 of the series at the end of the 30-paragraph article.

The Times eliminated one of the intermediaries in the old advertising model by creating the content for the client. This was work formerly done by ad agencies, and it creates a new revenue stream for the publisher.

[Read more: Here's why you should hire a salesperson]

TheSkimm accepts no programmatic advertising through tech platforms or ad exchanges. This way it can assure its sponsors that their message will not appear next to racist, sexist, or other objectionable content–brand safety, in other words.

Like The Times, TheSkimm has an internal ad agency that creates content for advertisers. Three of those advertisers sponsored a special section of articles on adopting healthier, more-productive behaviors in the new year.

TheSkimm also promotes e-commerce designed to align with the social values of its readers. The newsletter promotes the sale of environmentally friendly products in order to get a cut of the sales. They also sell clothing with slogans advocating social justice, promising that all proceeds go to the NAACP Legal Defense Fund.

One of the advantages of native advertising for independent news outlets is that it returns control to the publishers. They sell the ads that appear on their sites and keep all the revenue. They no longer rely on third parties like Google, Facebook, or algorithm-driven ad exchanges to deliver the ads.

A study by the Reuters Institute found that 15 publishers in Spain, France, and the UK were finding success with native advertising as an alternative revenue source.

Another Reuters survey of 200 media executives from 29 countries found that 75% of them listed native advertising as one of their highest revenue priorities for 2019. Only subscriptions and conventional advertising ranked higher.

Local news sites that emphasize public service are positioned well to benefit from selling advertising to the small businesses in their geographic area. These kinds of businesses often see themselves as part of the social fabric and like to identify with the public-service mission of a publication.

The risks of native advertising

"The Guide to Native Advertising" mentioned above goes into great detail about the associated risks. Among them: the questionable ethics of making ad copy look like news; the questionable ethics of having reporters write both news articles and ad copy; the lack of skilled staff in news organizations to perform ad agency functions; the power of the client to push for ethical breaches; and the lack of adequate “truth in advertising” regulations.

The Reuters Institute’s Digital News Report 2015 found that 33% of internet users in the UK and 43% in the US felt “disappointed or deceived” after reading an article when they later discovered it was sponsored by a brand or company. This can undermine the credibility of the news organization, the report found.

I recognize that all of the risks identified by the Tow Center and Reuters Institute are real and need to be taken seriously. However, the Reuters report indicates that readers were more accepting of sponsored content when it was clearly labeled.

In other words, readers want transparency and full disclosure. I lived and worked with these issues for two decades as both an editor and a publisher and believe all of them are manageable. You have to have some guiding principles having to do with staff training and transparency:

To be honest, some of the ethical hand-wringing seems excessive. News and advertising have always been mixed up in the same package. For decades, traditional media’s travel sections were supported by ads from airlines, resorts, cruise lines, and travel agencies, some of which might be mentioned in the articles. Ditto for cultural reporting on art exhibitions, films, theater, opera, books, and so on. And for luxury homes sections. And fashion sections. And automobile sections. The differences from native advertising are matters of degree.

On one memorable Sunday a year or so ago, the entire front page of Spain’s most prestigious daily newspaper was given over to articles and photos of the Ford Focus. It looked like an ad. Oh, it was an ad! It was labeled such — publicidad — in small type.

Was El Pais in such deep financial trouble that it was willing to prostitute its front page for Ford? Evidently, yes. And it wasn’t the only one. Other prestigious dailies also succumbed. 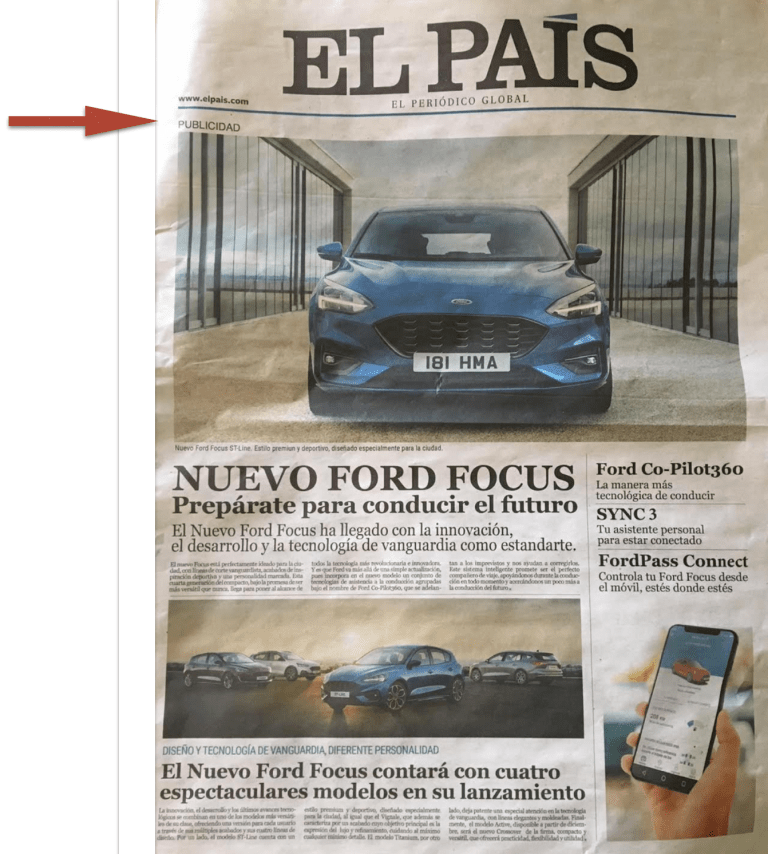 We all need to be on our guard all the time. Credibility is gained slowly over time, and it can be lost in a minute.

This post originally appeared on James Breiner's blog and is republished on IJNet with permission.