Univision has been the most important Spanish-language media company in the U.S. Now its digital news arm is taking aim at the 500 million Spanish speakers around the world.

Borja Echevarria, its digital editor-in-chief, says his team is at the beginning of an initiative aimed at Spanish speakers in Latin America and globally.

"We are covering topics that might occur in Bolivia but that could be related to something that occurs in Colombia or in Peru," he said. "We are not trying to attack highly local topics, at least not in this first stage. We are looking for topics of international interest."

An example of the kind of coverage he described was Univision.com’s multimedia package on Lake Poopó, the second-largest in Bolivia, which dried up because of climate change and has left a community of fishermen high and dry.

When Echevarria saw images of the lake, he sent a reporter and videographer to document the story’s impact on the local people and put it into a larger context. (This particular story was also published in English, which is being done on a limited basis, Echevarria said.)

“We’re weaving together a network of correspondents and collaborators throughout Latin America, and this is the beginning of a road from which there is no turning back,” he said. He mentioned migration as another potential area of coverage that has international impact and appeal.

Asked if this expanded coverage was tied to an advertising initiative, Echevarria replied, “Business models change every five minutes. Now, for example, it’s Facebook giving you the possibility of monetizing your native videos. We can’t wait until we have the perfect business models before launching ourselves into a territory of 500 million Spanish speakers. This is what we’re focused on."

Univision.com is profitable, has been growing rapidly, and is well positioned, he said, to continue growing because it has what everyone wants — video.

Univision and the English market

During U.S. President Barack Obama's visit to Cuba, Univision provided coverage in English by a new staff member, David Adams. He also covered the visit of the Rolling Stones a few days later. Echevarria said we can expect to see more English-language coverage on the previously all-Spanish site, although at the moment the amount is small.

As it happened, a few days after the interview with Echevarria, it was announced that Disney had withdrawn from a partnership with Univision on Fusion, an English-language website and cable channel aimed at the 18-34 market, the so-called millennials.

Originally, Fusion was aimed at attracting young Hispanics who consume media in English, but later Univision changed course and expanded its target to all millennials. 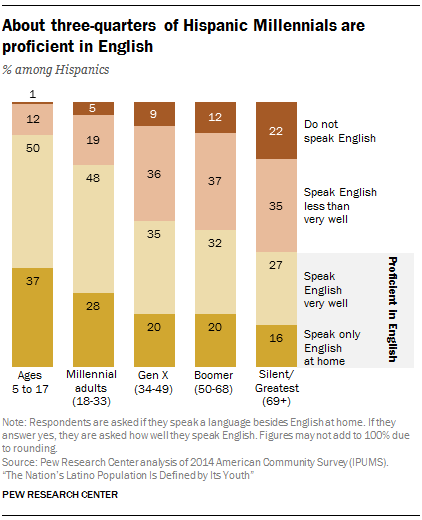 Anyone paying attention to the Hispanic market in the U.S. could see that younger Hispanics are increasingly favoring English, as shown in a Pew Research Center study last month (graphic at left). More than one-third of those ages 5 to 17 speak only English at home. Long term, the company had to make adjustments to recognize the reality that the Spanish-only audience is aging and shrinking proportionally.

Echevarria said Univision has changed from being focused solely on its Spanish-speaking audience to a multicultural and bilingual company. Univision’s English-language properties include The Onion, a satirical news publication, The Root, aimed at African-Americans, and Flama, a video site aimed at young Hispanics.

While Echevarria has no direct involvement in the English-language properties, he said they represent a significant part of the focus of Univision long term.

"We are becoming a multicultural business with a focus on minorities in the United States who represent 100 million people," he said. "I believe that the future of Univision will be totally multicultural and bilingual."

Bringing Spain on board

Echevarria mentioned that he has just made a major hire to his team: Delia Rodriguez, managing editor for audience engagement. Rodriguez developed Verne, the social media website of El Pais, Spain's largest daily, where she and Echevarria were colleagues. She is also author of a widely cited book, Memecracia, on memes and viral content in contemporary society.

"Delia is in my opinion one of the most talented journalists in the world when it comes to digital," said Echevarria. "She has a highly developed sense of the audience and how audiences move about in the digital world."

It will be good for Univision if she brings some of her Spanish audience with her. As Bloomberg and other media have reported, Univision is planning an IPO for later this year and hopes to generate as much as US$1 billion.