In Tunisia, a presidential power grab has created an "impenetrable fortress" for journalists

On July 25, 2021, as Tunisia grappled with months of political, sanitary and economic crises, Tunisian president Kaïs Saied suspended the parliament and dismissed the head of government.

Saied utilized Article 80 of the 2014 Tunisian Constitution, which grants the president the power to take “the measures imposed by the state of emergency” in case of an “imminent danger” for these moves. His interpretation of the article was widely criticized and experts questioned the constitutionality of his actions.

A year later, Saied reinforced his power with a new constitution in August 2022. The new constitution marks the return of a “presidential system, similar to what the country had prior to the 2011 uprising,” according to Human Rights Watch, referring to when then-President Zine al-Abidine Ben Ali, who had ruled Tunisia for 24 years, fled the country following mass demonstrations.

Press freedom has declined as the president's power has increased. Between 2021 and 2022, Tunisia dropped from 73 to 94 in the Reporters Without Borders’ (RSF) Press Freedom Index. On November 30, 2022, The National Union of Tunisian Journalists (SNJT) launched an advocacy campaign to contest “the repression against journalists” and “protect the freedom of the press and opinion.”

In this political environment where democracy is at risk, journalists are facing increased challenges, with reporters navigating restrictions on access to information, new limits on funding, and threats to their safety and freedom.

[читайте также: Dead end or bridge to the future? Understanding the impacts of journalism in authoritarian regimes]

“The Presidency is an impenetrable fortress,” said Thameur Mekki, editor-in-chief of Nawaat, an independent collective platform founded in April 2004 under the strictly censored political environment of President Ben Ali. Although there were already some difficulties in accessing information in Tunisia prior to Saied’s election in 2019, it has become even more challenging under his administration, Mekki explained.

Soon after Saied’s election, for instance, he restricted journalists’ access to the Presidential Palace and has since given few interviews to the press. Instead, the office of the president now relies only on the Facebook page of the presidency to publish official speeches.

A lack of communication combined with the presidency's new powers is frustrating the work of journalists. “This is not a surprise,” said Haïfa Mzalouat, editor-in-chief of the French version of the investigative media outlet, Inkyfada. “It was already difficult to get access to some ministries before. But now, the presidency’s voice is extremely present, which makes accessing information [even more] difficult."

The lack of access to information also slows  journalists’ reporting, said Mekki. “Because of all of these constraints, instead of writing an article in two or three days, we need two weeks,” he said.

Meanwhile, journalists have seen a narrowing of the kind of information they are able to access. “When a law was discussed in parliament, you could follow the debates. Today, when a presidential decree comes out at two o'clock in the morning, what else do you look for?” Mzalouat said.

Last August, the SNJT called the period a “crisis of information acquisition." Indeed, the legal pathway to access information, such as Tunisia’s equivalent to the U.S.’s Freedom of Information Act (FOIA) request, is less frequently respected. Although access to information is codified by Law 22, Mekki has noticed an increasing number of unanswered or incomplete answers to information requests.

Nawaat and Inkyfada, like most independent media in Tunisia, are partly funded by foreign organizations such as the International Media Support, European Endowment for Democracy and the Open Society Foundations.

Last March, however, a draft bill concerning the organization of associations was leaked, which mentioned a ban on foreign funding. Saied later confirmed his desire to ban outside funding, accusing associations receiving them to be “an extension of political parties.”

“This would be a big issue for the independent press in Tunisia,” Mekki said.

A "sword of Damocles"

In its 2022 report, RSF said that since 2019, "Journalists and the media have become the target of attacks by elected officials. They are facing an unprecedented outpouring of hatred and violence.”

There have been monthly instances of provocations against journalists and photojournalists, verbal and physical violence, threats, and “obstacles to the exercise of their profession,” according to the Center for Security at Work of the National Union of Tunisian Journalists, which tracks these attacks. The Center recorded 250 assaults on journalists between August 2021 and July 2022, an increase of 216 from the previous year.

While Nawaat’s journalists haven’t been physically attacked, two of their journalists were briefly detained in March 2022, said Mekki, explaining that this occurred while they were covering a demonstration in the South of Tunis in Radès, when police officers prevented the journalists from filming.

Journalists are nominally protected under Decree-Law 115 on Press Freedom. They are often prosecuted under the penal code or by military courts, however. In August, Tunisian journalist Salah Attia, was sentenced by the military court to three months in prison after he said on Al-Jazeera TV that Saied had asked the army to close the offices of the country's main union, the UGTT.

In September, a law concerning online disinformation was enacted in Tunisia. Specifically, Article 24 of the law punishes the spread of “rumors and fake news” with sentences of up to 10 years in prison if the “person targeted is a public official or similar.”

However, the terms “rumors” and “fake news” are not defined in the law. “This draconian law is intended to dissuade journalists from doing their job. It aims to create a climate of fear and push professionals to censor themselves,” RSF’s North Africa representative, Khaled Drareni said in a press release.

The decree was used for the first time in November against Nizar Bahloul, chief editor of the website, Business News, who was summoned for questioning by police after publishing an article about Tunisian Prime Minister Najla Bouden.

“It is quite simply a sword of Damocles,” Mekki said. “The decree-law is very heavy for the daily journalistic exercise, to the point of constituting a serious obstacle to the freedom of the press.”

Journalists are left questioning their role in a time of crisis, as the pressure on them continues to rise during Saied’s authoritarian shift. Since Tunisia’s parliament was suspended in 2021, Mzalouat said that she is left wondering “how to stay a counter-power” to authoritarian trends.

Meanwhile, both Inkyfada and Nawaat are among the independent media organizations continuing to publish articles critical of the president and his administration, despite the risks. “At Nawaat, we do not avoid certain subjects for fear of reprisals, because boldness has always been a part of our DNA,” Mekki said. 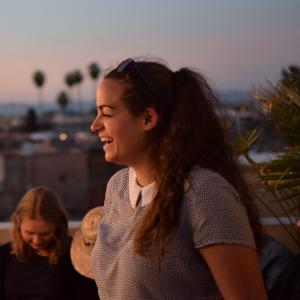 Mathilde Warda is French freelance journalist. Her works focus on the Mediterranean region and particularly on Tunisia and Turkey.