Snapchat is increasingly the place where young audiences consume their daily content. In April 2016, users watched a total of 10 billion videos on Snapchat every day. As more people are joining and sharing snaps of their daily lives, this number is only growing.

Beware of falling for the idea that Snapchat is only a funny place for teenagers who share videos of themselves with dog ears. The app is proving a good place for both news organizations and individual journalists to connect with their audiences.

The New Yorker regularly presents and explains its weekly cover in a creative way. At the BBC, correspondent John Sweeney immersed its users in the refugee crisis, and Ayman Oghanna snapped from Mosul as Iraqi forces retook the city. In India, The Hindustan Times’ Yusuf Omar interviewed rape survivors using filters that let them remain anonymous.

Hochkant, or ‘vertical’ in German, is a new Snapchat initiative aimed at teenagers from RBB, a German public broadcaster. RBB’s mandate is to serve all citizens with news, but was aware that many young people don’t watch TV anymore.

Every morning, Hochkant gives its users the four or five most relevant news stories. Later in the morning, the editorial team produces a special report with one of its three hosts, including Eva Schulz.

“I like to experiment with this storytelling. I’ve done it before I joined the channel, and I think it’s just very exciting,” she says about her job. 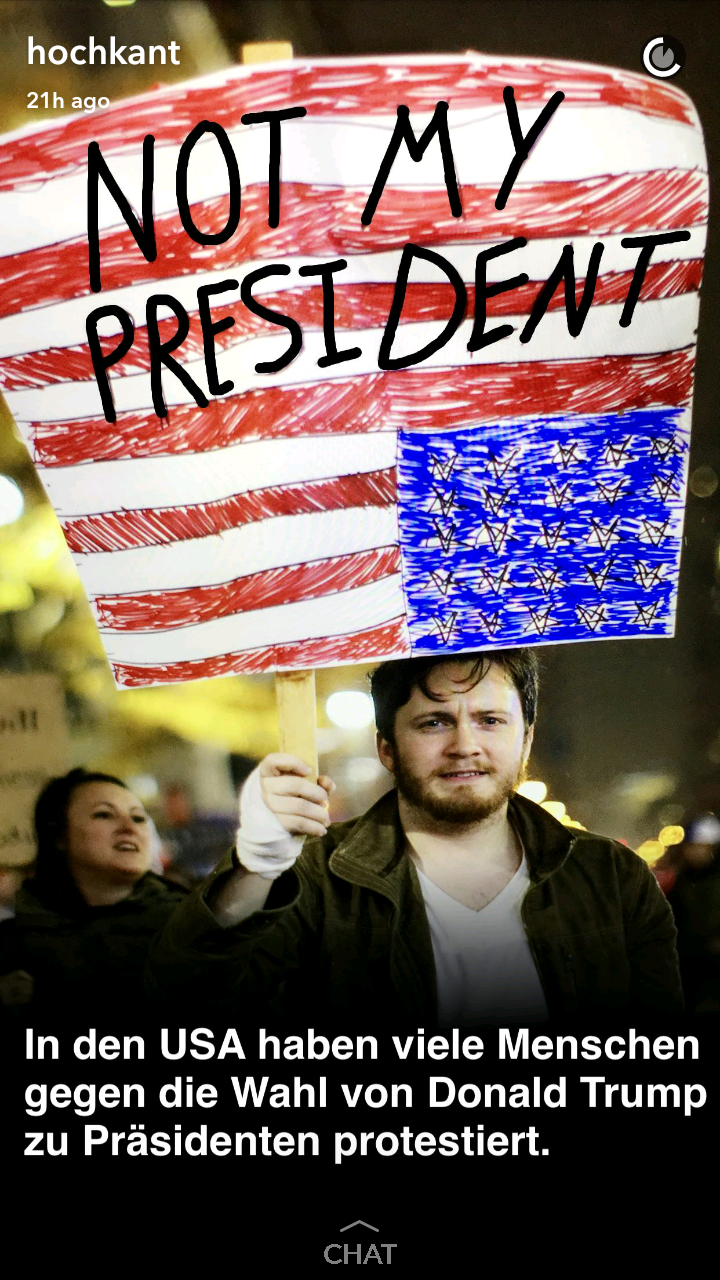 Even if her audience is mainly in Germany — though it’s hard to know because of Snapchat’s limited metrics — she snaps from places like Austria or the U.S. during the last weeks of the presidential campaign. But lack of geographical proximity to her audience is not a problem for Hochkant.

“From the very beginning, we thought that to reach out to youth these days, you have to do it in a personal way,” she says. Recently, an audience member called one of the hosts “almost like a big brother” figure in a review of Hochkant in a local German paper. “That’s the perfect compliment if we come across as their older siblings and not their parents or some weird news anchor,” insists Schulz.

Many news organizations have been trying to be less formal, especially on social media. NowThis News saw the opportunity to deliver information in a more visual, social and informal way several years ago. When Snapchat launched its story feature in 2013, NowThis was on it within the first week; it’s now one of the 22 publishers on Snapchat Discover.

But seeing what works on Snapchat stories can be complicated because the application doesn’t offer many metrics for users.

“There has been lots of debate between media organizations that use Snapchat stories about how to best track [engagement],” says Sarah Frank, executive producer at NowThis News. NowThis uses two different channels: the regular story feature for a more behind-the-scenes look at news, and a ‘Discover’ channel, which offers a dashboard with more metrics.

Most organizations use stories, and have to rely on open rates of individual snaps and manually calculate the completion rate. They can also track screenshots and the number of people who snap back and engage in conversation. After a story on stress for students, Schulz got several snaps from students who explained how they dealt with it.

“I find that very fascinating and interesting too because we really have to be innovative with processes as well as measurements,” Schulz says. “How do you measure success on Snapchat when you don’t even get proper statistics?”

After collecting over two years of data on Snapchat, Frank has a much clearer idea.

“You’re looking for stories that make people want to act in some way, feel something, and want to hold down, snap and send it to their friends,” she says.

However, she raises the importance of checking the reliability and accuracy of information before posting in the speed of action, because “as soon as [you] click ‘post,’ one, 10 or a hundred thousand people might see this.”

Hochkant’s journalists work with scripts except when they’re in the field because of the need for “control process,” especially as they are part of a public broadcaster. Although some might think Snapchat’s need for increased autonomy and responsibility is new to journalism, Frank uses an example from traditional journalism: live television.

“I think people just don’t equate that it’s the same because a lot of what you see on Snapchat is very off-the-cuff and very celebrity-driven or not super polished or not journalism. And that’s OK because Snapchat is big enough to have room for all kinds of stories,” she says. NowThis’ election coverage, for instance, was very successful, and they started a channel that’s dedicated only to post-election coverage.

But thoroughly explaining complex issues can be problematic because of the platform’s design, with snaps that last for up to 10 seconds. Schulz says she’d had to learn to “get [her] arguments straight, to talk about one thought or idea within one snap and then make a story of it.”

And sometimes, she struggles.

“How do you explain the TTIP [Transatlantic Trade and Investment Partnership] on Snapchat? It’s hard,” she says.