5 lessons supporting women's leadership in media has taught us

Today it’s not unusual to hear an organization or company saying they want to promote gender equality, but actually doing it isn’t easy.

Since 2017, we’ve been involved with Chicas Poderosas, a global community that ignites change by inspiring and developing women in media, and creating opportunities for all voices to be heard. First, by creating an active community of women journalists, communicators and designers who work in media and communications in Argentina. More recently, by working with Chicas Poderosas global team to develop the community in different Latin American countries.

Ahead of International Women’s Day, we want to share five things we’ve learned in the process of promoting women's leadership in media and including more women in journalism.

We hope these ideas can help other organizations, newsrooms, companies and individuals to approach their projects with a diversity and equality focus. And to seize girl power.

(1) Generate opportunities for women to learn

Chicas Poderosas was born with the mission to provide training for women in media so that by strengthening their skills, they would be able to be more prepared to lead and innovate. Training women journalists continues to be at the core of our mission: inspiring and developing women in media is our way of igniting change.

In 2017 we launched our New Ventures Lab, the first accelerator for independent, women-led media outlets in Latin America. We provided two cohorts of young entrepreneurs with soft and hard skills to lead organizations successfully.

We also provide training through workshops that our communities organize in different cities around the world, including Buenos Aires, Madrid, and New York. These spaces provide women in media access to skills they might not be exposed to otherwise, and gives them the opportunity to learn in a friendly and inclusive environment. Since our instructors are almost always women, we not only provide them skills, but also role models to learn from and connect to. 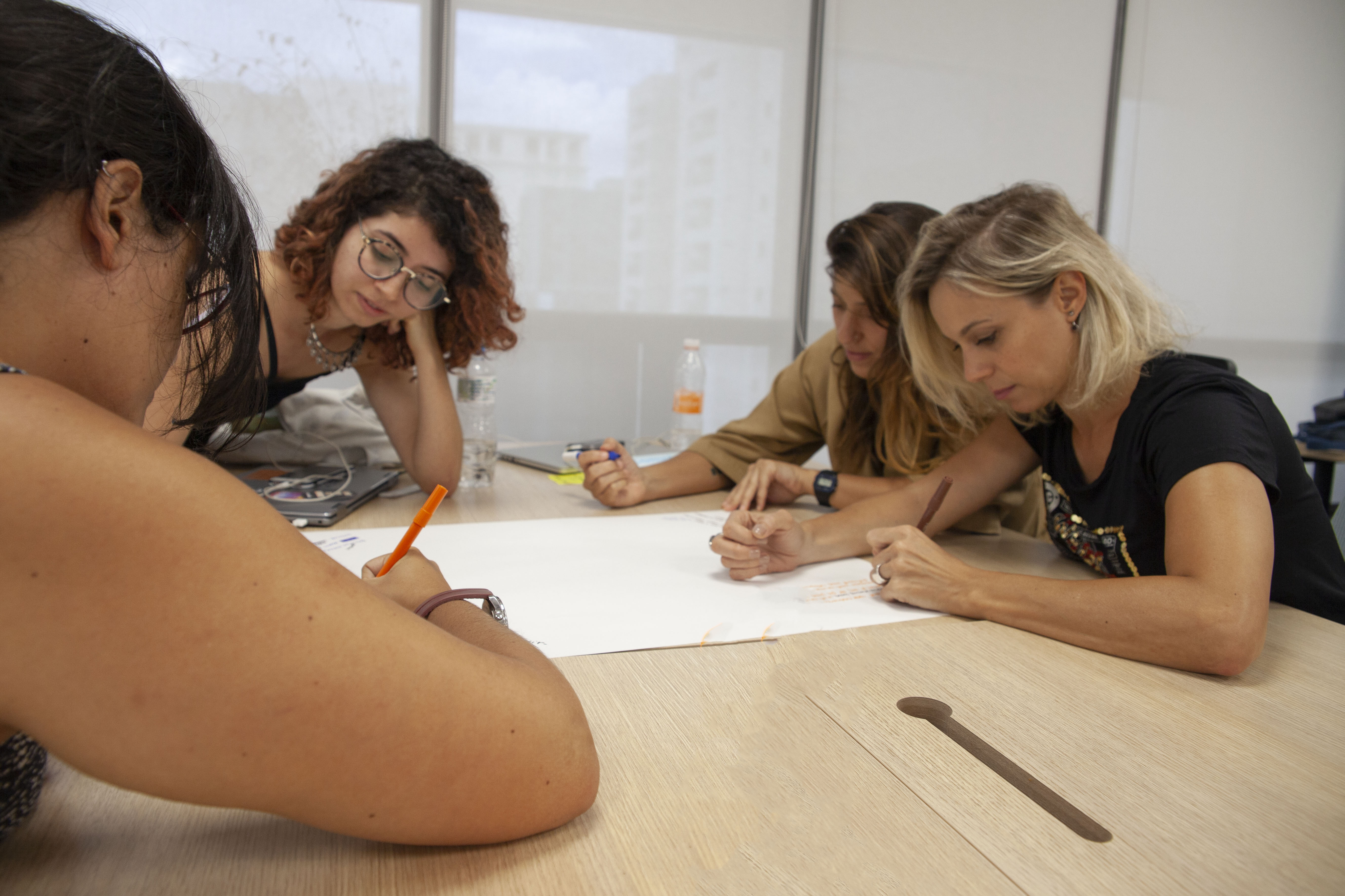 It’s time to change the patriarchal logic of competition, and to start looking for other ways to reach our objectives, carry out our projects and tell the stories we want to tell. Instead of pitting journalists and media professionals against each other, we want to create a more inclusive environment to seize everybody’s skills and ideas.

To do so, we create spaces for multidisciplinary collaboration. We’ve seen that when people bring their different talents and backgrounds to the table to work towards a common goal, magic happens.

We see the benefits of collaboration most explicitly at our mediathons, two day events where journalists, communicators and designers come together to create multimedia stories on underrepresented social issues. Their different origins, ages, life experiences and technical abilities allow them to raise questions, propose new approaches and tell more complex stories such as Correspondecias desde la Tierra, which was created so women from rural areas in Colombia could share their experiences with others through letters recorded as videos. Another example is this podcast created in Mexico to share older women's experiences with sexuality.

[Read more: The case for a collaborative project coordinator]

It’s not just about summoning women and non-binary people. It’s also about creating spaces for them to learn, collaborate and work. Many times women are not formally excluded, but they do not participate because they feel unsafe or threatened. After movements like #MeToo, we are all aware that sexual harassment can happen at work, many times without consequences for the harasser. But it isn’t only harassment that discourages women from speaking up at work, it’s also the knowledge and experience that their contributions are not always heard or respected. Most women can probably relate to this situation: you in a meeting, start sharing an idea and a male colleague starts speaking louder than you to share his idea — maybe even one that is similar to yours.

Ensuring that respect predominates in all interactions is crucial, which is why we created a code of conduct. Everyone who takes part in our activities — both online and offline — must read and accept the code, which includes rejecting harassment and discrimination and defending equality in all its forms. It creates space to discuss respect and its importance, and to lay the ground rules for how participants relate to each other.

Women only make up 24% of the persons featured in the media, according to the 2015 Global Media Monitoring Project report, which is published every five years by Who Makes the News. This means that women’s voices, ideas and issues are still absent from the majority of the news. Creating opportunities to amplify women’s voices and experiences is necessary in order to create more complete narratives and a more inclusive public agenda.

At Chicas Poderosas we generate spaces for women to tell stories about the issues that affect them, and we push for stories that not only include women, but prioritize their voices. By doing so, new stories are emerging and new conversations are starting. For example, we published a special report on the migration experiences of women and non-binary people, 10 HistoriAs MigrAntes (10 Migration Stories) that focused on an often neglected aspect of migration. These stories were underreported until our report revealed important realities. After publication, these stories were replicated by media outlets all across Latin America such as Distintas Latitudes and Managua Furiosa.

Another example: At a mediathon held in Argentina last year a group reported on the lack of a national law to regulate clothing sizes. They chose to focus on how this situation affects women in particular, and began a conversation on social media with the hashtag #MiCuerpoNoEsElProblema (my body is not the problem). This hashtag went viral, creating a national trending topic, with thousands of women sharing their experiences. The group of journalists gathered these responses into a story that they published in one of the main national newspapers, Clarín.

Women’s struggle for their rights is not limited by borders. We’ve seen how the anti-femicide campaign #NiUnaMenos (not one more) has traveled from the south of the continent to other Latin American countries, and is now a regional call for an end to violence against women. We’ve seen how #MeToo has spread beyond Hollywood and motivated women to report abuses all over the world.

Taking a regional approach can strengthen efforts to eliminate gender inequalities by increasing visibility and raising women’s voices. In 2018, when the right to safe, legal and free abortions was up for debate in Argentina, the local Chicas Poderosas community decided to explore how women were accessing or demanding for their right to abortion in other countries in the region. This led to our first regional investigation involving 28 reporters from 18 countries collaborating remotely. The final report was replicated in media outlets around the world, including Univisión, El Mundo and Infobae. It also helped position a local conversation in a regional — even global — way, identified shared struggles and helped the cause gain more strength in the media agenda.

All images courtesy of Chicas Poderosas.