With less than a month to go before Americans head to the polls on Nov. 8, newsrooms everywhere are focusing their attention on the U.S. presidential election.

And in the wake of The Washington Post’s story on a 2005 audio recording that exposed controversial comments made by Republican candidate Donald Trump, the role of combing through recordings of both candidates has become especially apparent.

In this election, the right soundbite can have a powerful impact on public perception — and the course of the election itself. Yet searching through these recordings is often a painstaking, costly process, especially for speeches that can easily exceed an hour in length.

That’s why audio search technology company Deepgram is offering its services to accredited journalists at no charge through Election Day.

“Regardless of which side of the political aisle you sit on, we can all agree that the world would be a better place if there were more journalists with the wherewithal to slog through reams of documents and countless hours of audio and video,” Deepgram co-founder Scott Stephenson wrote in a blog post.

Using Deepgram’s software, it’s possible to upload an audio or video file, then search for specific words — like ‘jobs,’ ‘taxes’ or ‘security’ — within the recording. The software’s artificial intelligence pinpoints the exact spots in the recording when those terms are mentioned. 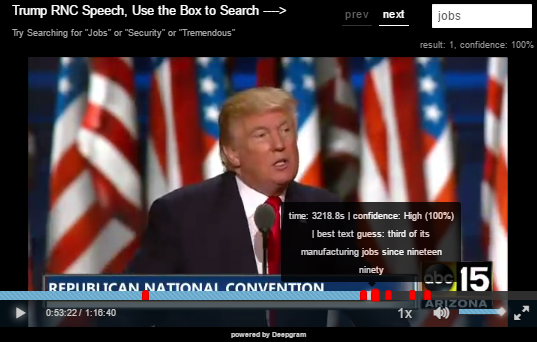 In the example above, we searched Trump’s speech at the Republican National Convention for the term ‘jobs’ in the top-right corner. Each red timeline marker indicates when the word was mentioned; by clicking on these markers, you can jump to that part in the speech and listen to the full audio clip. Much like one can search a text document for specific terms using Ctrl+F, journalists can scour speeches, private conversations and phone calls for keywords with Deepgram.

Ordinarily, Deepgram’s service costs 75 cents per hour of audio. Accredited journalists can access the software and receive dedicated support for free up until Election Day.