When OpenFile launched in 2010, the tight-knit Canadian media community reacted with slightly skeptical enthusiasm. Legacy newspapers including The Globe and Mail and National Post said OpenFile was going to revolutionize online news…or at least “redefine” it.

Behind the headlines was an elegant concept: Ask readers to tell you what they think is important and make editorial decisions around that. Two years later, the media industry watched with equal fascination as OpenFile suspended publication, went through a bitter fight with unpaid freelancers, and eventually shut down its site.

The organization produced lots of compelling stories by putting its audience at the center of its work, proving that citizens who are media savvy and engaged in their communities will participate if a path is cleared for them. The part that OpenFile didn’t figure out — and serves as a warning to media startups today — is how to fund reader engagement so that journalists can dedicate more time to reaching larger segments of their community.

These are the three key engagement lessons we think can be gleaned from OpenFile’s sudden departure from the Canadian media scene.

OpenFile Takeaway No. 1: Know what you are

Before you can ask for a moment of someone’s time — be they a source, a volunteer, or a colleague — figure out exactly what you want to achieve and build an organization that is powerfully designed to make it happen.

If he could do it again, Dinnick said he would have spent the first few months focusing on how to make the user flow intuitive — before raising any money — and he would have then sold that product to other media companies. “It would be all about utility: getting the OpenFile widget on to as many news websites as possible, and nailing down the user flow to make sure that anybody can suggest a story,” he said. That’s not to say that the editors and journalists weren’t providing value for the company and the community — but producing stories pulled focus away from OpenFile’s true intention, which was to improve community engagement and get those stories into the world as efficiently as possible.

OpenFile Takeaway No. 2: Community engagement is a full-time job

Be realistic about the amount of resources that community engagement requires and measure success based on what you are trying to achieve (see Takeaway No. 1). 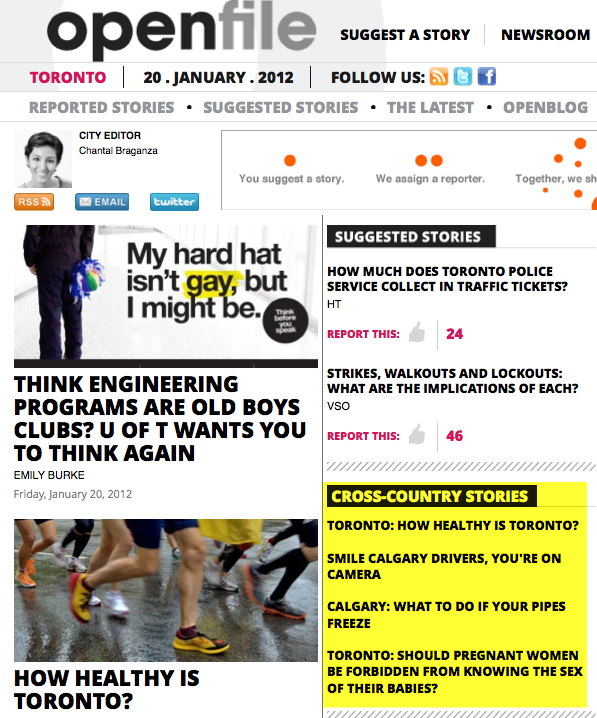 The struggle to find a revenue stream pushed OpenFile to focus on clicks to attract ad dollars. At some point, OpenFile started to shift into something different, said Neal Ozano, the site’s Halifax editor. It wanted to be “this community-minded thing,” but it also wanted to be competitive with other media outlets; that meant content needed to be pumped out daily, which didn’t fit the speed at which community-suggested stories evolved. Editors were trying their best to drum up story ideas from the community, but they were also busy assigning stories, editing them, and interacting with readers on social media.

“I think a lot of news organizations have realized that community engagement is a full-time job,” he said. If you’re going to expect journalists to engage with the community, you have to appreciate that it takes effort and certain skills. Editors need to figure out ways to help journalists do this type of work, perhaps by forming teams that can buttress the amount of work that is required, he said.

It’s also important for editors to be realistic about output, Silverman said. If editors only focus on the number of stories that a journalist produces, they’re ignoring other important indicators, like the amount of engagement that a community has around that journalist’s work. The infrastructure of managing and rewarding community engagement properly is “the big thing” that editors and managers need to think about, he said.

OpenFile Takeaway No. 3: Meet your audience where they are

Identify your audience and go to the places where they hang out, both online and in person. Keep in mind that this takes a lot of time (see Takeaway No. 2), so be thoughtful about how you use your resources.

“We underestimated just how hard it would be to attract new readers and new story ideas. I found that social media and word-of-mouth weren’t nearly enough for what I was trying to do in Toronto, which I hoped they would be,” said Topping, the Toronto editor. It’s not necessarily the case that if you build it, they will come.

Consequently, the people who were finding OpenFile’s website were only a subset of the audience that editors hoped to reach: mainly the sort of engaged, educated, and media-savvy people who had the time and interest to suggest a story. That made it more likely that OpenFile would receive a certain type of story idea, making it more of an urban issues website than a broader news site that gave underserved communities a platform.

As for journalists who want to integrate community engagement into their work, Silverman’s advice is simple: “Introduce yourself with a sense of openness and humility, and say: You know more than I do. Here’s what I want to try. Here’s how I would love it if you could help. What might you be able to do?” It’s not about throwing up a form and expecting magic to happen, but actually doing the work to get out there in front of people and meet them.

Regardless of its mark on the media landscape, OpenFile shows that communities have untold stories they are eager to share — and that journalists can work with them successfully when they’re given resources to engage with readers in prolonged, sustainable ways.

This article was originally published on Nieman Lab. It was edited and republished on IJNet with permission.