Reporting on COP26? Here's what to focus on.

The 26th United Nations Climate Change Conference, also known as COP26, has generated significant buzz, setting the table for what could be almost two weeks’ worth of reporting — and hopefully more — on the climate crisis, the environment and related topics.

In what many believe is the most important climate conference in years, COP26 will feature debates around financing solutions to the climate crisis. These negotiations will focus on engaging wealthier countries, in particular, to commit more funds to support efforts by lower-income countries to decarbonize their economies. The conference will also include deliberations around efforts to reduce greenhouse gas emissions, attaining carbon neutrality and addressing unequal commitments made by countries — with some making more sacrifices than others.

A major element of the conference will be the negotiations among global leaders. However, recent announcements that President Xi Jinping of China, and Russia’s Vladimir Putin will not be in attendance have raised concerns about the likelihood of any major agreements being reached.

At a time when the climate crisis is at its most dire and only continuing to worsen, journalists will need to look beyond official press releases and announcements to provide incisive reporting for their readers. For journalists covering the conference: What is newsworthy and worth reporting on at COP26?

I've attended training sessions over the past year as a Fellow with Climate Tracker, an organization whose mission it is to support, train and incentivize young journalists in developing countries to better report on the environment. Here are some of the most important takeaways from these training sessions for how to cover this crucial summit, including key issues to keep an eye on.

Secure global net zero emissions by 2050; adapt to protect communities and natural habitats; ensure that developed countries honor their commitment of US$100 billion in climate finance per year; and commit to working together to meet the challenges of the climate crisis. These are the key goals of COP26, which should be considered story leads that can be explored from different angles — not just from what is announced, or isn’t, at the conference.

There are interest groups, organizations, researchers and experts, too, that can serve as helpful sources for global, regional and national story ideas. The International Energy Agency and the World Health Organization are just two examples. Find more here.

A notable shortcoming of the Paris Agreement is its vagueness on accountability. Countries have been unable to reach a consensus on basic actions, such as how to report progress made, and agreeing to metrics, benchmarks and timelines.

Individual countries, for example, can decide to set their own goals, and by when they want to achieve them. This could bring about inequality in the race to carbon neutrality and net zero emissions, with some countries making more ambitious commitments than the others.

Journalists can report on the resulting accountability vacuum by covering what individual countries are committing to and putting into action. They can provide coverage of achievements realized, as well as the concrete steps taken by countries to meet their objectives.

[Read more: Lessons learned during the pandemic for reporting on the climate crisis]

Track discussions on the role of individual countries

Buy-in from China is key for the world to achieve many of the  goals set in the Paris Agreement. However, Chinese President Xi Jinping will not be attending the conference in person, and the Chinese government has been reluctant to make a big new carbon pledge which could be crucial for achieving many of the goals set for the conference, and the global climate change agenda in general. Significant climate damage can be avoided, or at least minimized, for instance, if China, India and Russia pledge to cut their greenhouse gas emissions by more than half by 2030, and completely eliminate them by 2050.

The Paris Agreement acknowledges that wealthier countries historically have contributed more to the climate crisis. As a result, it  requires that the U.S., U.K., France and more support lower-income countries with funding to address climate change.

China and India, in separate statements, have championed the call on richer countries to make more substantial financial commitments to support more under-resourced economies. South Africa, one of the countries that would benefit from the fund, has also asked for $750 billion annually. However, the commitment made by developed countries of $100 billion annually will not be reached until 2023.

Monitor talks on coal and methane

Coal is another critical issue at COP26 that journalists covering developing countries should pay attention to, according to Climate Tracker experts. The International Energy Agency estimates that coal alone produces about 15 billion tons of carbon dioxide annually. By curbing the use of coal, and  investing instead in clean sources of energy, countries can move closer to achieving carbon neutrality.

A number of options for governments to tackle emissions from coal-powered plants include capturing the carbon they emit, using the plants for other purposes and ending operations at existing ones. The conference will offer a forum for international organizations such as the International Atomic Energy Agency to present new ideas for dealing with coal.

Methane, which has significantly more warming power than carbon dioxide, will likely also be a major focus at COP26. Research suggests that cutting methane emissions by 40% can be achieved by 2030, so reaching a major anti-methane pledge could be a major development to keep an eye on at the conference. 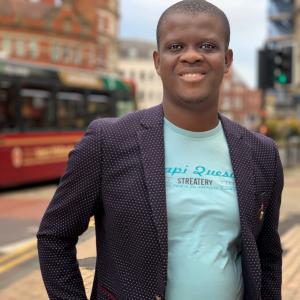 Paul Adepoju is a Nigeria-based freelance journalist, academic and author. He is also the community manager for the ICFJ Global Health Crisis Reporting Forum.