A reporter's collective in Brazil advocates for anti-racist journalism

How can you build an antiracist media landscape that amplifies Black voices? This was one of the questions that prompted the creation in 2019 of the Lena Santos Collective of Black Journalists, in Belo Horizonte, Brazil.

Named after Lena Santos, one of the first Black women news hosts in Brazil — she anchored a daily afternoon newscast at TV Globo — the Collective’s goal is to fight racism and report attacks on journalists. It regularly spotlights its members and initiatives that seek to create a more democratic media industry, and also strives to spur debate around the working conditions of Black journalists, by questioning the lack of representation in Brazilian newsrooms.

It all started when journalists Márcia Maria Cruz and Edilene Lopes wrote a chapter for the book “Vozes Negras em Comunicação: Mídia, racismos, resistências” (Black Voices in Communication: Media, racism and resistance). "I suggested we should write an article on how a Black journalist in a newsroom can influence, change and impact reporting," said Cruz. She and Lopes created a WhatsApp group so that they could interview journalists for the article and learn about their personal experiences. The group has more than 80 members today, from across several news organizations.

The Collective has met remotely during the pandemic, keeping in touch on a daily basis through the WhatsApp group. According to member Ethel Corrêa, they brainstorm story ideas that are pitched to their editors or turned into content for social media. "We as a Collective discuss, write articles in tandem, make decisions and take action," she said.

[Read more: Advancing diversity and inclusion in the news media]

Journalist Bruno Torquato, another member of the Collective, said there are still too many challenges when it comes to racism in news coverage.

"I was working on this story of a Black man who was assaulted in front of a liquor store. The military police claimed he cursed at the police officer, and the story was published with the headline: 'Black man assaulted,'" Torquato said. "After publication, they called me asking to cut the word 'Black,' claiming it has nothing to do with it. We pondered with the editors and decided to keep it — after all the person who was assaulted was Black and it made sense in that context.”

He added: “We should not be afraid of these words or these concepts. One must say 'Black,’ 'racism,’ 'racist,’ always when fighting for anti-racism.”

Along with producing coverage that does not discriminate against the Black community, Cruz also wants to shed light on the lack of Black reporters in Brazilian news outlets. "The Collective aims to reflect on where we are now and where we can get to. The first thing we identified is that Black journalists are still a minority in newsrooms in Brazil, and these professionals are also still a minority in leadership roles,” she said.

A 2021 study on race in the Brazilian press confirms this. The report surveyed 1,952 media workers, and interviewed Black journalists to further understand the racial issues in the industry. According to the findings, only 20% of journalists self-identify as Black or mixed race. White journalists are also paid more and they dominate leadership roles, occupying 60% of them. Black professionals comprise 40% of leadership positions.

The reality is changing little by little. A 2021 study conducted by the Federal University of Santa Catarina profiling Brazilian journalists found that the number of Black professionals working in newsrooms rose from 23% in 2012 to 30% in 2021. The researchers credit the rise to progress made in anti-racism efforts over the past decade, diversity strategies in the labor market, and to quotas established by affirmative actions policies.

Still more needs to be done to increase the number of Black journalists in the media, such as trainee programs, career development plans and diversity roles, according to Cruz. Initiatives focused on hiring Black professionals are still controversial, however. For instance, when screenwriter Déia Freitas, founder of the podcast Não Inviabilize, advertised a screenwriter assistant job exclusively for Black, mixed race and indigenous women, it drew complaints of "reverse racism." Freitas wrote on her Twitter account: "I've got very well-crafted applications from Black and indigenous trans women who are currently sex workers because they didn't have another option; from Black women with a master's degree who work as cleaners; from Black women with amazing writing work who never got a job."

Journalist and Collective member Etiene Martins supports quota policies and initiatives like this. She believes the backlash this job ad generated can be attributed to the amount of money offered. "A deserving salary paid to a Black woman has an effect on racist people," said Martins. "Interestingly, there is no such backlash when we have official government data showing that Black women account for the majority of the unemployed population. Nor when this same data proves that a Black woman makes less money than a white man, even though she is more qualified and works in the same role as him.”

In May 2021, the Lena Santos Collective hosted the first National Conference of Black Journalists in Brazil, attracting renowned Black journalists like Maju Coutinho. The conference provided a space for exchanging professional experience, with the hopes of amplifying "this tiny space we occupy in Brazilian news outlets," said Názia Pereira, who is a journalist and a member of the Collective.

During the conference, attendees discussed issues such as TV stations being the media organizations that hire Black professionals the least. “Radio, print and social media provide a bit more opportunity. Maybe it’s because in these media outlets a professional does not have to show their skin color," she said.

"Black people account for the majority of the Brazilian population, and they need and want to be seen and to be mirrored. By employing more Black people, outlets will draw a larger audience as well," Corrêa said, adding that hiring more Black professionals leads to an increase in advertisers, too. "They are not giving us anything, but they are opening their eyes to the market." 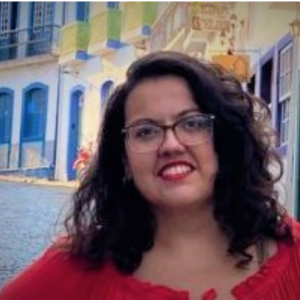 Marina Souza is a researcher on decolonial gender studies and books written by trans authors. She holds a master's degree in Literature, Culture and Technology from CEFET-MG, is a member of the research group ATLAS, and is currently a doctoral student in Literature Theory and Comparative Literature at UFMG.