Instead of counting on readers to stay glued to articles while using devices that are overloaded with information and choice, media organizations around the world are experimenting with different ways of delivering their content.

Enter live journalism. In addition to giving readers a more focused, captivating way of consuming content, it also brings extra revenue to both journalists and the organizations they work for. For photojournalists, this presents an alternate way of presenting their images.

IJNet spoke with Florence Martin-Kessler, co-founder and editor-in-chief of Live Magazine, about the emerging live journalism movement — particularly as it pertains to photojournalism. Based in Paris, Live Magazine has drawn international attention for its live, one-night-only storytelling format that allows journalists to tell original, unpublished stories onstage before an audience.

One of the opportunities that live journalism has brought, particularly for photojournalists, is the ability to showcase unpublished photographs. Any photojournalist will attest to the fact that they have thousands of unseen images which were not suitable for their particular publication.

“Once we had Jerome Delay, who is AP's chief photographer for Africa, based in Johannesburg,” said Martin-Kessler. “He was able to tell a graphic and violent story about lynching in the Central African Republic. Some of the images were not publishable [in traditional media] because of the violence and the death. The fact that you are in a room with the photographer makes it possible to show things that you might not be able to show in print or digital.”

With a number of photojournalists still holding on to a lot of their images, one would be tempted to think of having a live journalism show based solely on photography. However, a mixture of photography, text and interactive storytelling is usually more ideal, Martin-Kessler said.

“At the end of this year, we will have put together 28 public shows and more than 250 stories,” Martin-Kessler said. “Maybe 25 or so are photojournalism stories, a lot more stories do have photographs, so visual narratives are an essential part of what we do. At every show, at least one photojournalist goes on stage, either with slideshows or some other form of visual storytelling.” 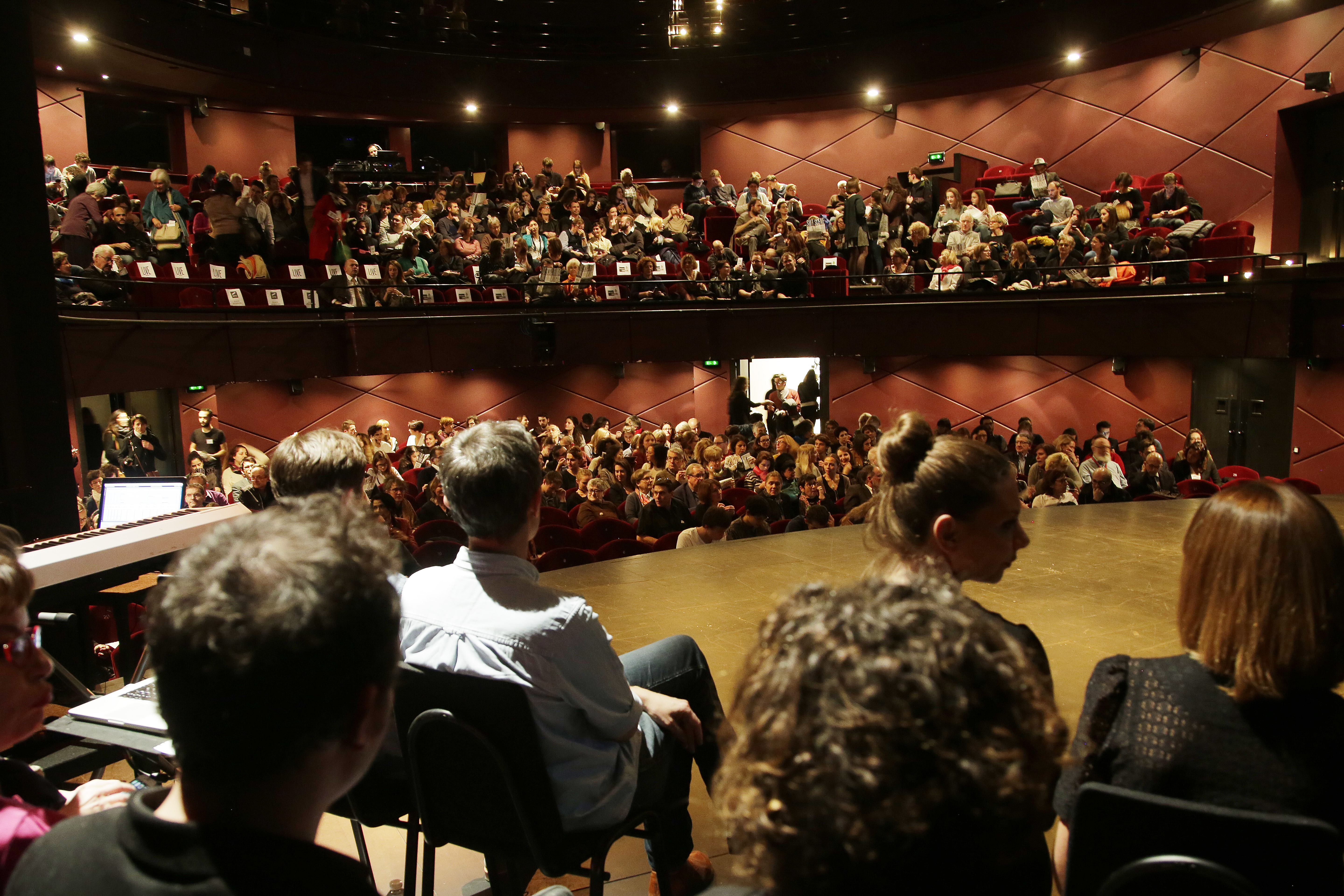 Photojournalism already has a visual appeal, which in most cases limits the addition of more visuals as there is a risk losing the audience’s attention. Martin-Kessler noted how it was difficult to make photojournalism interactive, as the photojournalism sessions were more deeply involved.

“We try to produce the most free and creative stories and try to push the boundaries in term of multimedia experiences,” she said. “Sometimes we do have stories without any words, we have stories in dance, with images. We try to explore different ways of narration: slide shows with live music, just images, a mixture of words and images, of sound and images, After Effects edits, etc.”

“For us, stills work better than video,” she said. “We have been trying to present documentary stories, but it’s a bit hard. It doesn’t work every time. We had a venue in which photos could be screened on three sides — it was not really 360°, but it was very good. We have also done stories where there is just one picture and the author unfolds the story behind that one image.”

The biggest chunk of revenue that live journalism shows bring to media organizations comes from ticket sales; another large portion comes from sponsorship or sponsored content. According to Martin-Kessler, not many photojournalism stories have been sponsored.

“We do try to have a sponsored content. We have done that four or five times, in the form of ‘live advertising,’” she said. Pop-Up Magazine in the U.S. does a lot of sponsored photojournalistic content. Visa pour l'Image has also dabbled in sponsored content.

Live Magazine is expected to present about six photojournalism-based stories in September at the Visa pour l'Image-Perpignan.

Main image CC-licensed by Flickr via benswing. Second image of a crowd at a Live Magazine performance taken by Jerome Delay and courtesy of Nieman Reports.