Key apps and tools for reporting inside Ukraine

For journalists traveling to Ukraine to cover Russia’s ongoing invasion, it’s critical to use the most cutting-edge apps and tools to enhance safety and productivity.

Here’s a practical guide to the documents, apps and tools you’ll need to make the most of reporting in Ukraine:

First and foremost, any journalist planning to visit Ukraine should obtain accreditation from the Ministry of Defence of Ukraine. This enables reporters to enter conflict-ridden cities and interview government personnel, among other things. Now, even NGOs are asking for this accreditation before providing statements.

"Foreign journalists are welcome to Ukraine. The requirement is [that they] have their press ID card, but in some military regional zones the accreditation from the Ministry of Defence is obligatory, as in Mykolaiv," said Alexander Pavlov, a veteran Ukrainian journalist covering the war on the frontline.

Since journalists receive digital proof of accreditation, it’s useful to have a mobile phone while reporting in the country, which can be used it to show or send a digital photo of your press ID, accreditation, or passport. All of these files can be kept in a locked or hidden folder for security, but it’s also wise for journalists in war zones to keep hard copies of the most important documents in case their phone is lost or dies.

Telegram, Viber and WhatsApp are the most popular messaging apps in Ukraine. Telegram is the most used, allowing you to communicate with a great number of local individuals and organizations.

Signal is the most secure messaging app, due to its end-to-end-encrypted messaging. Used by many activists and politicians when communicating with journalists, Signal’s usage increased almost 700% the week after the invasion.

When it comes to navigating inside Ukraine, the globally popular Google Maps is best. It does not work as well offline, however, so it’s a good idea to download an offline navigation app when there is no mobile service.

Two offline navigation apps that are popular in Ukraine are Open Street Maps and Maps.Me. Though neither of these apps are as accurate as Google Maps, especially in small towns and villages, they work with full capabilities offline for long periods.

Apps that alert you about imminent bombings are a safety necessity in a war zone like Ukraine. This is important even in cities far from the frontlines of the battle, such as Lviv.

Air Alarm Ukraine not only alerts users about air raids but also displays a map of nearby shelters with contact information. Another handy app is Starlink, a broadband service operated bySpaceX that can track and deliver information about bombings to users even without Wi-Fi.

If you don’t speak or read Ukrainian or Russian, Google Translate will be the most reliable assistant. For signs or documents you can’t read, you can point your phone’s camera at them and the app will superimpose a translation of the text in your preferred language. You can download languages for offline use, too.

Google Translate also has a conversation function that lets two parties speak their preferred language while the app translates back and forth. Unfortunately, this function doesn’t work very well in Ukrainian, but it still can be helpful for basic conversations.

It is important to use virtual private networks (VPNs) for security in Ukraine. Russia has blocked many apps and websites in some regions of Ukraine, and also conducts cyber attacks in the country from time to time. A VPN enables users to send and receive data across shared or public networks as if their computing devices were directly connected to a private network. VPNs can often access blocked sites or apps, and also help safeguard against cyber attacks and hacks. Many Ukrainians use ExpressVPN.

Another useful app is SpyBuster, which allows you to scan computers and identify programs and apps that were created in Russia and Belarus, which may seek to spy on, or hack and damage files on your computer.

[Read more: “We will rebuild": Ukraine's women journalists look towards the future]

As a visiting journalist, you may be in search of local sources to assist your reporting. Here, Telegram can again be used, to disseminate news without the oversight of government institutions. You can follow local English-language outlets, like the Kyiv Independent and Kyiv Post, and even international media such as The New York Times, which launched its own Telegram channel earlier this year. Alsorecommended is subscribing to channels like “Media Center Ukraine” and “Lviv: journalists & fixers.” You can find similar “journalists and fixers” channels in other locations by changing the name of the city.

War.ukraine.ua provides minute-by-minute updates about the war that have been verified by the Ministry of Foreign Affairs of Ukraine.

There are apps used by many Ukrainian families and individuals, especially those in more affected areas, that allow you to communicate with them directly. If you are looking for stories about local people, apps like Prykhystok can be useful. Ukrainian volunteers created the platform to help find housing for people affected by war. Help in the evacuation, an e-initiative by Ukraine Now, connects people who have cars with those who don’t.

Due to the heightened war activities in the area, there are some resources specifically for this region that can help facilitate your reporting. Live UA Map visualizes the war’s frontline and posts news about it. UkrInform provides updates on the status of war operations and social, economic and humanitarian-related issues.

Ivan Z., who works as a fixer in many cities in active war zones, offered app recommendations of his own for journalists in the region. "Marinetraffic is perfect for following and checking ship movements, Flightradar for [airplane movements], and Deepstate for [information from] the frontline,” he suggested. "Foreign visiting journalists should analyze the situation in Ukraine and have a good plan about what they want to do, even if they cooperate with a good fixer or use apps. That would make their trip safer."

Photo by Margarita Marushevska on Unsplash. 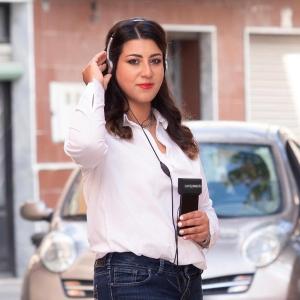 Shaima Madboly is a journalist, researcher and lecturer based in Europe. She worked for years at Sweden’s Public Radio (SR), France 24, BBC and others. Shaima's journalistic work focuses on covering conflict and post- conflict. She also lectures on the so-called peace journalism and non-violence.