CNN Chief International Correspondent Clarissa Ward was studying comparative literature at Yale University on September 11, 2001, when the twin towers of the U.S. World Trade Center were attacked in New York City. She found herself wanting to get more involved in world affairs, which led her to pursue a career in journalism.

Shortly after 9/11, she accepted her first journalism gig as an unpaid intern for CNN in Moscow. This led her to an overnight desk assistant job at Fox News in New York City. Nineteen years later, Ward has traveled to several continents, reported on different beats and interviewed people from all walks of life. She has reported from Baghdad, Beijing, Beirut, Moscow, New York and London, working for Fox, ABC, CBS and CNN.

“I became consumed by this idea that I wanted to try to act as a communicator between worlds,” she said. “I also thought that maybe I could act as a kind of translator, too, because I felt that somehow miscommunication, dehumanization and lack of engagement were part of the problem.”

Last April, Ward published her memoir, “On All Fronts,” which looks back on a career reporting on natural disasters, war and conflict. She began writing the book while pregnant with her first child in 2018. What started off as a letter to her unborn son transformed into what Ward called a “love-letter to journalism.”

“It's a thank you letter to all the people who I've met along the way who have given me a cup of tea or a profound insight,” she said. “There's so many small acts of kindness that happen behind the scenes — behind the camera — that don't make it onto the evening news.”

Immersing in the community

Ward spent a large part of her career reporting in the post-9/11 Middle East. She also covered the conflict in Syria, the tsunami in Japan and the Russian incursion into Georgia.

Ward would often embed herself in the communities she reported on. She spent time living with U.S. troops, the Taliban and local families around the world. Full immersion, she said, makes the reporting richer.

“It's like a crash course,” she said. “Especially if you're parachuting in for a couple of weeks and you don't have the luxury of spending a year in a place. I think that you get a much deeper glimpse if you are immersed.”

Challenges in the field

After 9/11, the Middle East was considered unsafe for American journalists, and particularly women journalists from the U.S. Being a woman reporter in the region, however, could be an asset, too, she said. “It also is incredibly valuable [to be a woman] in the sense that in the most conservative societies, I have access to 50% of the population that my male colleagues don't."

Still, Ward was reporting in war zones, on the frontlines of conflict, and there was danger associated with that. In her book, she recounts the time she witnessed an angry mob beating a man, an incident she decided to film for one of her segments. “I wanted the viewer to see the ugliness of the moment with no filter,” she wrote.

Ward was also forced at times to decide whether to involve herself in situations that might jeopardize her authority as an impartial reporter. There can be significant gray areas in some cases, and every journalist needs to decide for themselves how to approach them. “As long as we're all grounded in a place of using facts, truthful information and eyewitness accounts to act as the basis of our reporting, then it's okay for us to be a little bit subjective in terms of calling things out,” she said.

Once, for instance, when Ward was embedded with the Taliban, she wanted to interview a Taliban commander. The commander, however, refused to be seen with a woman on the street. Ward used footage taken of that conversation for the story itself.

In her memoir, Ward also reflects on the toll her reporting took on her mental health. She would occasionally drink after a hard night’s work, and sometimes smoke cigarettes to cope, despite not being a smoker. “If you're spending years in violent frontline situations, seeing people being killed, being frightened for your own life, being surrounded by people in the midst of grief and trauma, and you're not affected by that emotionally — you're probably a sociopath,” Ward said. “Chances are, if you do this job, you will be affected. It does take a toll, and that's completely normal.”

Ward’s advice for journalists addressing their mental health is multifaceted.

First and foremost, have a therapist to check in with during or after a stressful assignment, she said. Or, at the very least, talk with someone you can trust. It’s important to have a group of friends or support network that you can return to “normal” life with, but with whom you can still be honest about your experiences in the field.

“I think the hardest part of this job is not necessarily even what you see in the field, but then coming back to normal life and being expected to reintegrate immediately and go out for dinner and drink wine and laugh,” Ward said. “And you have to be able to do it, to live fully and be present in both parts of your life, but it takes time and it takes practice, and we should be able to have a more honest conversation about that.”

Ward recognizes the stigma around mental health and substance abuse problems that exist within journalism. The best way to address this issue is to attack it head-on, allowing more room for conversations both within newsrooms and through journalist-to-journalist interpersonal relationships, she said.

After nearly a decade-long long-distance relationship, Ward married the love of her life in 2016, and seven months later she became pregnant with her first son. The major life events marked a shift in how she approached her career. 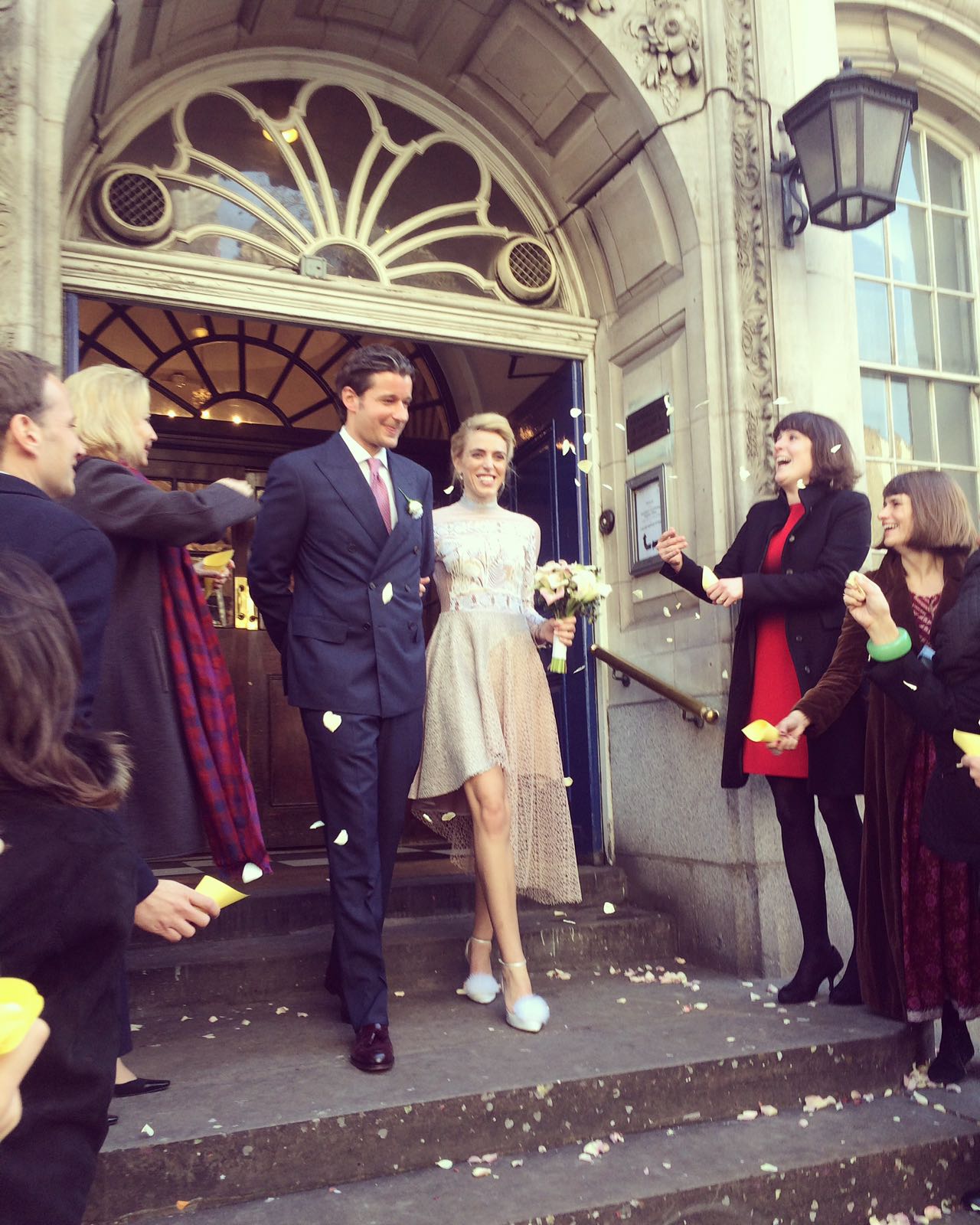 For many years, Ward had been the first to jump on an assignment in dangerous war zones or disaster areas. Now, she had to put a bit more thought into her and her future child’s safety. She also became more affected by what she witnessed while on the job, she found. “I noticed when I was in the field that I was much more emotionally porous than I was before. I'm very moved, particularly by the plight of mothers and the suffering of children,” Ward said. “Obviously any normal human being feels moved by that stuff, but now it's come to the point where it's almost unbearable to see some of these things.”

While CNN left things up to her about working during her pregnancy, Ward ultimately decided to go home. She had been covering the conflict in Yemen, and had experienced several anxiety attacks, fearing that her baby wasn’t kicking as much as he used to. Still, becoming a mother has not changed Ward’s mind about traveling to dangerous places to cover a story.

Her first son, Ezra, was born in March 2018 and her second son, Caspar, was born in June 2020. During her second pregnancy, Ward had to navigate working during a global pandemic. Like many reporters, this meant that she had to learn how to report from home.

“It's the first war I've had to cover from my living room,” she said. “This is like 9/11 level of disruption, and in the same way as after 9/11, we didn't really fully understand the implications and ramifications of everything that was happening,” said Ward.

Since the pandemic began, she has contributed to CNN's breaking news coverage of COVID-19 and tensions between the U.S. and Iran. She and her team also recently wrapped up an investigation into the poisoning of Russian opposition leader Alexey Navalny, finding and confronting the Russian agents they say carried out the crime.

The future of journalism

It will take highly committed journalists to keep telling stories and tune out the abuse and noise directed their way these days, said Ward.

For young journalists, in particular during COVID-19, Ward suggested they make use of the extra time they might have on their hands now: “Use the time to bone up on whatever you can, whether it's the technology, teaching yourself to shoot, learning basic editing, doing as much writing as you possibly can or watching old news stories and documentaries. Do whatever you can do to improve your skill set.”

While Ward encourages anyone to pursue a career in journalism, she said it also takes passion in order to succeed.

“It's a tough job on so many levels — logistically, emotionally, personally — there's a lot of sacrifice that comes into it. It demands a lot,” she said. “But if you're willing to do that, and if you're curious about the world... I would argue that it's the best job in the world.”

In 2016, Ward received the Excellence in International Reporting Award from the International Center for Journalists, which is IJNet's parent organization.

All images are courtesy of Clarissa Ward.