A Danish niche newspaper has found a unique way of holding their newspaper and journalists to account to the community they serve, as a way of building trust. Not financially, but editorially. Erik Bjerager, CEO and Editor-in-Chief of Kristeligt Dagblad, spoke to the World Editors Forum about this initiative.

"One problem in journalism is that we look very critically at all other institutions in society, but not so much at ourselves," Bjerager said in an interview. "Do we actually serve the public? And do we live up to our own expectations?"

In order to look at themselves through the eyes of their readers, Kristeligt Dagblad, a small newspaper about life’s big questions, created a rather self-critical, transparent annual report evaluating their own service. It was distributed as an insert to all readers last Friday.

"The distrust in media is unfortunately very high," said Bjerager. This is a global problem, and despite a year-on-year increase in trust in media overall, as measured by the latest Edelman Trust Barometer, trust in journalists has actually declined.

In this context, editorial accountability is a welcomed new phenomenon. But there is no benchmark yet. Unlike in financial accounting, there are no set rules or guidelines, explains Bjerager.

This report is the second attempt of the newspaper to hold itself to account, and this is how they did it:

The best and worst, according to well-known Danish people

Why not ask politicians, journalists, business leaders, publishers and professors what they think about the newspaper? Sørine Gotfredsen, Parish priest, writer and journalist, is one of the survey's notable respondents. Here's what she said: 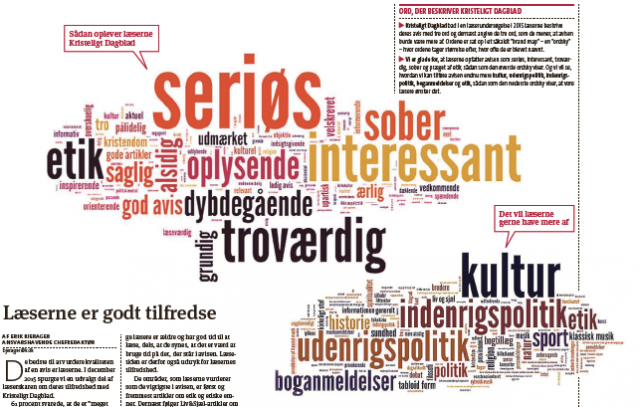 Kristeligt Dagblad regularly holds surveys to check reader satisfaction. Normally, the results are used internally to further develop the newspaper. But for the editorial report, they have published them in the form of a word cloud, indicating a) the words used to describe how people view the newspaper, in descending order of importance: serious, interesting, ethical, sober, trustworthy; and b) what readers would like to see more of: culture, domestic politics, foreign politics, book reviews, sports.

It should be easy to complain about the newspaper's journalism, the report states, and provides an email address for that purpose. It further explains how to take a case to the Danish Press Council in the case of an unsatisfactory response.

The number of errors journalists made are diminishing, but slowly, the report states; from 108 in 2014 to 107 corrections last year.

This post originally appeared on the World Editors Forum blog and is republished on IJNet with permission. Ingrid Cobben is Media Editor at the World Association of Newspapers and News Publishers (WAN-IFRA).