Challenges to watch out for when building a news bot

So far in 2016, major media outlets like BuzzFeed, CNN and The Washington Post have all built news messaging bots. Publishers have started experimenting with this technology due to evidence that more people are using major chat apps like WhatsApp and Facebook Messenger than other top social media networks. If publishers don’t start trying to disseminate their content via messaging apps, they may eventually see a drop in readership, the reasoning goes.

Politibot, a messaging service that debuted by delivering news, data visualizations and analysis about Spain’s 2016 elections via Telegram, is one example of this news bot experimentation. The bot is currently delivering Spanish-language visualizations about the 2016 U.S. presidential election.

IJNet spoke with journalist Eduardo Suarez, a Univision freelancer who helped build Politibot, about his advice for journalists interested in designing and building bots.

Before building a bot, know your audience

Instead, Suarez and a team of five people — including a sociologist, two data journalists and two developers — identified a niche audience they could target. Suarez knew that many people who worked in Spanish politics — from campaign advisers to analysts to canvassers — were already using Telegram as their preferred messaging app.

“It was a platform where we already had an audience,” Suarez said. “It wasn’t very large, but it was an audience that was very interested in politics.”

Thus, they decided to build Politibot for Telegram rather than Facebook Messenger and launch the bot on June 9 — the beginning of the Spanish general election campaign. In order to hook additional readers, that same day Politibot provided subscribers with an analysis of likely voting patterns based on one of Spain’s most important sociological studies.

“It was something valuable that we would give to the reader in exchange for them following us,” Suarez said. “Thinking of how to provide value to our readers was important from the beginning.”

Users did appear to find the content disseminated by Politibot useful — by the end of June, the bot had more than 8,000 subscribers, surpassing the developers’ expectations.

Give your bot personality 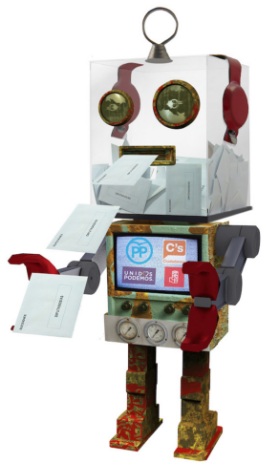 Suarez and the Politibot team invested significant time into designing a quirky personality for their bot, which included making Politibot a fan of Theodore Roosevelt.

“The first thing we did before anything else was think about what type of personality this bot was going to have,” Suarez said. “He’s a robot, but what type?”

Media consumers in Spain aren’t used to interacting with news bots, which is why the design team wanted to emphasize a “human connection” with Politibot.

“We wanted a humble robot,” Suarez added. “He’s a clumsy robot who doesn’t always respond well, but recognizes it. We wanted to be clear that no one should expect more than what we promised.”

“It’s been surprising,” Suarez said. “People have been showing it affection.”

Keep an eye on what comes next

The Politibot team discovered another unexpected use for their bot when they realized that every time they asked their users to respond to a survey question, they received an unusually high response rate.

This has inspired them to think of other ways they could use this survey data to create new content, Suarez told IJNet. If the team finds the resources and the time, they may experiment with creating a Facebook messaging bot.

“There’s lots of things we’d like to explore,” Suarez said.