During a workshop in Islamabad, Pakistan, a reporter raised a question I often hear from journalists operating in conflict zones: “With so much violence, how do we decide what is worth covering?”

His newspaper was making a conscious effort to move beyond breaking news and body counts to the real story: How human beings were being impacted by traumatic events like suicide bombings, targeted killings and attacks by extremist groups.

During the discussion, we drew up guidelines for reporting beyond the event: Shed light on why this is happening. Show human consequences. Give voice to people whose lives are shattered.  Look for “quiet heroes” who reach out to victims and survivors. Discover the extraordinary in the ordinary lives of those touched by violence.

One reporter described a story about an impoverished couple welcoming two children into their family after their parents were killed in a car bombing. Another told of a doctor who performed free plastic surgery for some of those maimed by attacks.

These journalists were on the right track.

Frank Ochberg, founder of the Dart Center for Journalism and Trauma, believes the media’s role is more important when disaster strikes. “The way journalists cover these events can have a profound effect on how a community reacts in the aftermath of a tragedy,” Ochberg said in an interview for ICFJ’s Disaster and Crisis Coverage guide.

He stressed that during times of extreme shock, trauma and tragedy, it is important that people’s thoughts, feelings and behavior are reported accurately. That helps the public digest the situation and provides a framework for how they can begin dealing with it.

Shortly after 9/11, I ran across a quote from former Poynter reporter Bill Mitchell that serves as an inspiration for moving beyond breaking news to more humanized reporting.

“Journalists are re-discovering that one of the best ways to report the impact of big sweeping stories is to explore their specific, personal impact on everyday lives,” Mitchell wrote.

The veteran journalist asked: “What does it take, once you’ve found a good story about an ordinary person, to report and write it in an extraordinary way?” He then pointed to The New York Times’ “Portraits of Grief,” a series that profiled more than 2,500 9/11 victims.

He described profiles that “typically focus on a single aspect of the subject’s character or an especially endearing talent or trait. They often include a life lesson ... that Times reporters have managed to reveal and celebrate in a couple of dozen words.”

So, how do journalists emulate this more humanized coverage? My best advice: Map out a plan. 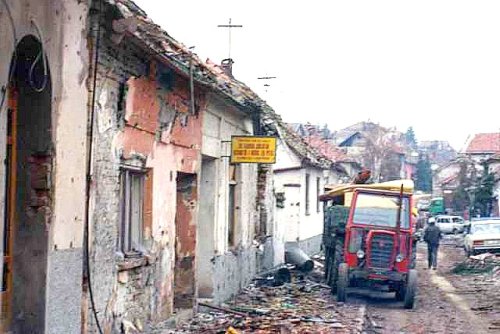 When I covered the aftermath of a massacre in the Croatian village of Vocin during the Balkan Wars, I interviewed survivors, relatives, local police and the parish priest to gain insight into the horror.

I toured the makeshift morgue and watched grief-stricken families identify loved ones. A surprising number were willing to share intimate memories about an uncle who was a great folk dancer or a mother who offered her freshly baked apple strudel to Croatian soldiers passing through town.

During the reporting process, I focused on four questions: What is the real story here? What do I want people to understand after reading my story? Who are the main voices? Why should anyone care?

Jennifer Aaker, a social psychologist and professor at the Stanford Graduate School of Business, specializes in the art of storytelling. Her research is particularly relevant to journalists.

Aaker found brains are wired to remember stories, and that a good narrative is 22 times more memorable than facts or figures alone. She listed elements for storytelling success, including:

A goal. Why are you telling the story? Your goal should clarify what you want the audience to think, feel or do at the end of the story. An effective goal considers where the audience starts and the journey to the endpoint.

Grab attention. Why would people want to listen to your story? Use a hook to reel the listener in. Hooks can be surprising truths, visual effects or an unusual approach.

Enable. If your story is shareable, people will spread your ideas. Make your story memorable and easy to read.

I would add one more: Switch viewpoints. Look beyond the obvious for fresh angles.

In journalism circles, there is an iconic example known as “the gravedigger’s story.” After John F. Kennedy was assassinated, his body lay in state in the Capitol Rotunda. Mourners paraded before TV cameras and throngs of reporters.

Reporter Jimmy Breslin chose a different route. He went to Arlington National Cemetery — and his highly descriptive story of an old man digging the president’s grave remains one of the most memorable of that tragic time.