As Rio de Janeiro enters the final stages of preparation for the Summer Olympics, news media from all over the world are trying to understand the city and its contrasts. Inevitably, that includes going inside the favelas that are spread across the city and discussing issues like state violence, resident evictions and racism. But it also includes exploring the art, music and spirit of people living in the favelas.

In efforts to explain their city, residents of the favelas are using journalistic tools to tell their own stories.

For 21-year-old community journalist Thaís Cavalcante, resident of favela da Maré in the North Zone of Rio de Janeiro and journalist for newspaper O Cidadão, even the appropriate use of words when describing her community is essential.
“I don’t even like to say community. Saying ‘favela’ is a way to describe where I am from. It is not a pejorative term," she said in an interview with the Knight Center for Journalism in the Americas. “It is a place that I respect and love, for which I fight to have visibility. If we, the residents, don’t communicate, no one will do that for us.”
According to Rio On Watch, a site dedicated to community reporting in Rio de Janiero’s favelas, one of the most frequent problems observed in international reports is "lazy language," the use of stigmatizing and inaccurate terms. Though the use of this kind of representation is declining, the most frequent translation for favela is still “slum” or "shantytown," according to Rio On Watch. The organization suggests simply using the term “favela.”
For favela residents, newspapers like A Voz das Comunidades (The Voice of the Communities) from Complexo do Alemão and O Cidadão (The Citizen) from Maré, both located in Rio de Janeiro’s North Zone, may provide a clearer picture of life at home.
Recently, some favela residents found a way to amplify their voices by connecting with the news site The Guardian. In a series for the site, “Rio Olympics: the view from the favelas,” Cavalcante, along with favela residents and journalists Daiene Mendes and Michel Silva, describe their daily lives in journal form, including news about police killings residents and protests, but also photograph exhibits and funk parties, events where young people meet to dance to regional music.
For 25-year-old Mendes, who uses the app Moments to write entries, it is also important to highlight the positive sides of living in a favela.
“My role is to make the world see beyond the war scene between police and drug traffickers. Our people are strong, talented and creative 'warriors.' These characteristics are too important to be left behind,” she said. 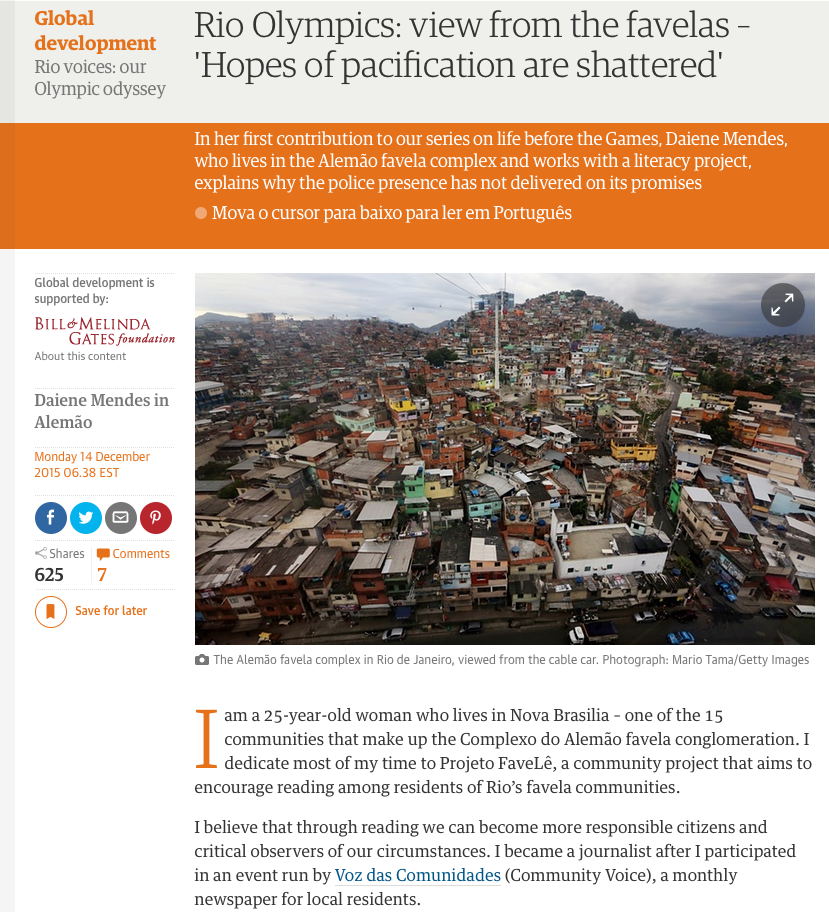 Cavalcante said she also tries to emphasize the cultural activities in her neighborhood. In one of her entries for The Guardian series, she described an LGBT rights campaign in her community that included a photo exhibition, public debate health fair and parade. She also wrote about another photography exhibit put together by the “many great photographers” in Maré, like Henrique Gomes, who documented a family’s daily life.
“Covering cultural activities is a unique way of showing our reality. The cultural life is very common and very rich here in Maré and in other favelas. That’s something that doesn’t show up in traditional media,” Cavalcante said.
When reporting on their favelas, community reporters try to go beyond what is recurrent in media: violence.
“It is very easy to publish stories on violence when there is conflict between the police and drug traffickers,” Mendes said. “But, in traditional media, it is so rare to see stories on evictions for the construction of Olympic buildings and on the changes in bus lines that affect poorer people. I try to share what my friends and neighbors are talking and thinking about.”
Silva, a 21-year-old journalist for Viva Rocinha and Fala Roça, two community newspapers from Rocinha, a favela in Rio’s South Zone, said that the support from The Guardian has already made a difference.
“When I identify myself as a community journalist, the government is not receptive. But when I say I am a correspondent for The Guardian, answers come quickly,” he said.
Silva stressed that, though given the opportunity to speak on a global level, “favelados” still don’t have representation in local media.
“Foreign newspapers are giving community journalists more space than Brazilian media itself. Brazilian media is more limited, perhaps because it defends political interests. The space for community correspondents is essential for transparency in journalism,” he said.
This post originally appeared on the Knight Center for Journalism in the Americas' blog and is republished on IJNet with permission.
Main image of Rio de Janeiro CC-licensed by Flickr via Steve Martinez. Secondary image is a screenshot of website for community newspaper A Voz das Comunidades in Rio de Janeiro; third image is a screenshot from the series "Rio Olympics: the view from the favelas," featured on The Guardian.