How to make news more reusable

He’s been a copy editor, tried every medium from broadcast to print to online and even taught the next class of journalists as a professor. Throughout his career, Hadi has worked with the editorial and business sides of news production and alongside interns, reporters, editors and upper management.

His wide-ranging knowledge of media will help him face his next challenge. As part of his fellowship, Hadi will work with HT Media, a leading media company in India that owns the popular Hindustan Times, to develop efficient newsroom processes using technology and maximizing the lifespan of the information reporters gather.

Though Hadi will be based in New Delhi, he says the vast area the Hindustan Times covers and other projects will allow him to make stops all over India.

IJNet: What’s your role as an ICFJ Knight Fellow?

Nasr ul Hadi: I work with multiple partners in the Indian news ecosystem to help them improve efficiencies in news, think of new product ideas and improve revenue streams.

IJNet: Tell us about your work with the Hindustan Times.

Hadi: [HT Media] is one of the largest publishers in India. They run three titles that they’re known for: An English daily, a Hindi daily, which is a local vernacular daily, and a business daily.

One of the key transitions they’re going through right now is they’re bringing in all three teams’ entire operations from different physical spaces into one flat newsroom of 40,000 square feet. So putting them all in one space is going to be rough, obviously.

Throughout this physical transition and tech transition, how do people fit into processes and workflows? This is what I’m helping them with.

If you had three different newspaper staffs in the same physical space, can you reduce redundancies in newsgathering? Can you consolidate the efforts you’re making toward collecting news and use that output across all three products?

A very simplistic version of explaining this would be this: Imagine a local crime happens. Can I stop sending one reporter from each of the three titles and just send one person to gather information that’s needed from the field? Then, I can deploy the other two to complete other elements of the story.

IJNet: Print is still strong in India. How should Indian news organizations be reacting to digital? 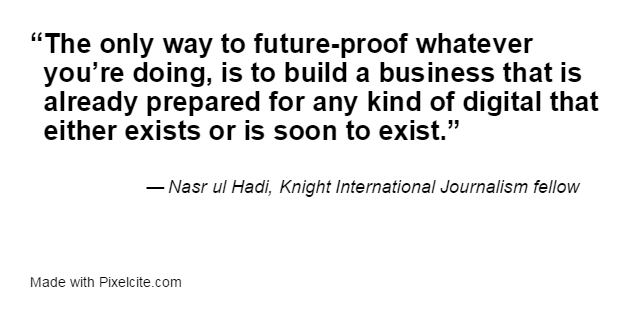 Hadi: The only way to future-proof whatever you’re doing, is to build a business that is already prepared for any kind of digital that either exists or is soon to exist.

A huge part of what I’d like to do is help them think of producing stories or news in a modular way, the way code is produced so you’re able to reuse and repurpose a lot of content that you’ve already done.

One of the examples I give a lot to people I’m talking to within news organizations is: 90 percent of the news you’re going to produce in this 24-hour cycle will never be used again. Even if you write follow-up stories three months down the line, you end up building those stories from scratch.

If you’d produced them initially in a modular fashion, you’d be able to add in 30 percent of the new updated content, and reuse or reorder 70 percent of what you already had.

The other thing I’m focusing on is as reporters, irrespective of the media we’re working in, we work in a way where 70 percent of all the things we collect for a story gets edited out by us or by editors. Only 30 percent gets in the final story.

Watch the video below to find out what Nasr's advice is for journalists currently in the field.

This interview has been condensed and edited.