6 social media challenges for journalists in 2020

According to new research from We Are Social and Hootsuite, there are 3.8 billion social media users around the world.

“Nearly 60% of the world’s population is already online,” said Simon Kemp, Chief Analyst at DataReportal (who produced the research), “The latest trends suggest that more than half of the world’s total population will use social media by the middle of this year.”

With this type of reach, social media use is essential for most journalists, both in terms of story gathering and distribution. It’s a fast moving space, so journalists need to be alive to the challenges – and opportunities – that this space affords.

Below are six emerging issues and considerations for journalists in 2020.

A fundamental challenge for social media users is that mis- and disinformation typically looks exactly the same as real news in your feed. As a result, at first glance, it can be very hard for journalists and non-journalists alike, to discern fact from fiction.

As a result, we all need to “think before we tweet,” check the provenance of material we are sharing or using in our work, and be aware of the latest techniques being used to spread misinformation, conspiracy theories and partisan agendas.

To address this, these 11 tips from National Public Radio’s On The Media are also a useful starting point. Digging deeper, I highly recommend the training materials and the newsletters produced by First Draft, a global nonprofit specializing in disinformation and other media trends. These are valuable resources that all journalists should be familiar with.

The spread of mis- and disinformation can be accidental, for example when people share stories from satirical websites like The Onion, but assume they’re true.

Who can blame them? Sometimes truth is stranger than fiction. Remember those stories from last year about President Trump wanting to buy Greenland? You couldn’t make this stuff up!

However, sharing this information isn’t always an accident. We also see the weaponization of social media by state actors and opportunists with the intention of influencing what we see, and our view of the world around us. Driven by financial, as well as ideological motives, this type of online activity is only going to increase.

That means news consumers — and producers — need to be more media literate than ever.

As journalists, we need to be able to interrogate sources in new and more sophisticated ways. These requirements will only increase as deep fakes and other manipulation techniques become more advanced.

This appears to be the first deep fake used in an election. A BJP candidate for the legislative election (remember, the BJP mounted a massive domestic disinfo campaign during the PM election) made a deep fake to show him speaking in a different language.https://t.co/7d8S3Lo7RK

Journalists and anyone using social networks needs to be cognizant about the potential repercussions of what they say online. These spaces aren’t safe from onlookers, and actions taken in these spaces are not without consequence.

In Egypt and the United Arab Emirates, for example, people have been imprisoned for online posts and WhatsApp messages.

And it’s not just what you personally say online, you can also be impacted by association.

Last year, incoming Harvard freshman Ismail Ajjawi, a Palestinian from Lebanon, was initially denied entry into the United States, purportedly due to social media posts from his Facebook friends that expressed political opposition to the U.S. Ajjawai was eventually allowed into the country and able to start his classes.

(4) The move to closed networks

Because of these trends, we are witnessing a rise of self-censorship, as consumers become increasingly wary about what they say and post online.

In the U.S., research from Pew Research Center highlighted a desire to avoid contentious conversations or expressing opinions which may be in the minority.

Elsewhere, conversations are moving to closed networks like WhatsApp groups and Telegram channels due to their encryption and a perception that these channels can bypass digital eavesdropping. In recognition of this, Facebook announced a pivot to privacy last year.

A key challenge for journalists is that conversations move from the open internet to closed spaces. Being able to access these discussions is not easy, and if you do gain access, do you identify as a journalist? Does this skew the conversation and, in some cases, create risks to your personal safety? Work by former BBC Social Media Editor Mark Frankel offers a good starting point to these issues and considerations.

Tech platforms are designed to show us more of what they think we like, rather than what we need.

Essentially your news feed on Twitter, Facebook or Instagram is a giant recommendation machine. These recommendations are based on what the platform thinks you want, which makes it difficult to be introduced to views which differ from our own.

For journalists, that means we have to remind ourselves that online discussions are not representative of populations at large, and that they are deeply filtered by both platform algorithms and what people choose to post.

As storytellers, we need to work hard to be exposed to different points of view. Social media is a tool to help us in our work, but traditional methods of identifying and building relationships with sources remain just as pertinent.

This is especially true in countries and regions where many voices and experiences go unheard on social media, either because people do not have access to the technology, or they do not understand how to use it.

Social Media is a complement to tools and techniques that journalists have always used, but not a substitute for it.

(6) Where to invest your time and energy

“The world’s internet users will spend a cumulative 1.25 billion years online in 2020,” said Simon Kemp, “with more than one-third of that time spent using social media.”

One final challenge for journalists and media organizations is understanding where audiences are spending that time — and the implications of this.

The average internet user had an average of 8.5 social media accounts, according to data from GlobalWebIndex in 2018, up from 4.8 social media accounts in 2014. However, the way users divide time between these platforms varies. Although Facebook is the overall market leader, time spent on different networks changes by demographic and country.

Moreover, because each platform has its own characteristics, social media strategies that work for one platform don’t necessarily work for another.

As a result, diving into data from DataReportal, GlobalWebIndex, the Digital News Report and other sources is vital if you’re to understand local trends and their implications.

In a time-pressured newsroom you cannot be everywhere online, so alongside the wider trends outlined in this piece, determining where your audience is — and what they want from their time on a given platform — is essential for your social media success. 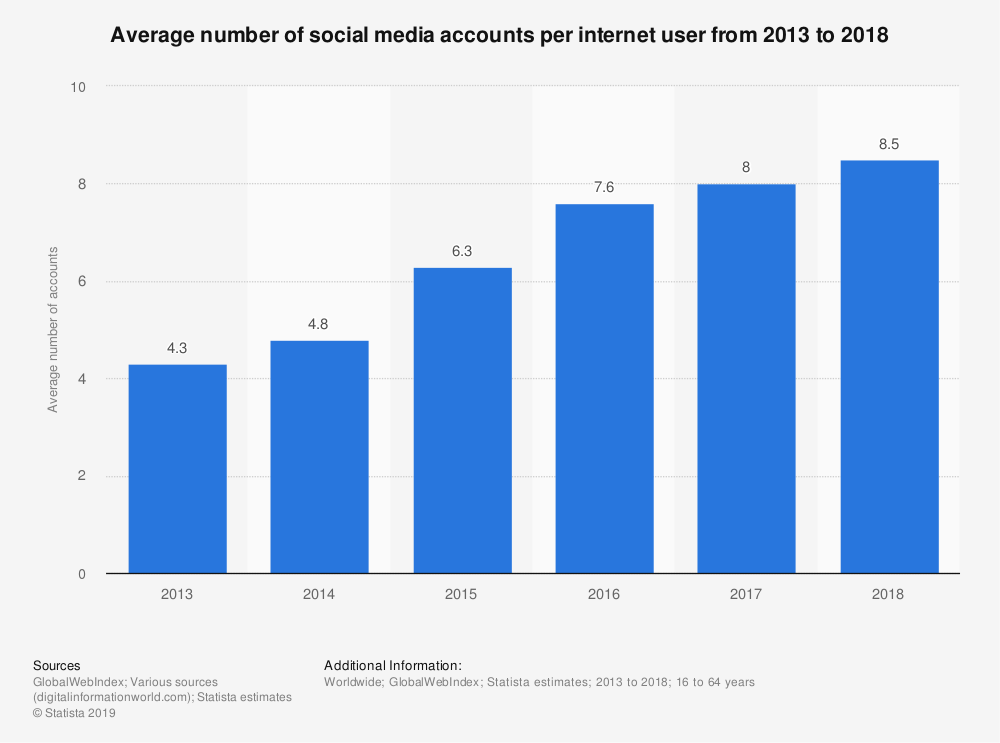 He initially presented some of these thoughts at the United Nations’ 2019 International Media Seminar on Peace in the Middle East, as part of a panel on “Hashtag Activism.”