Nonprofit investigative news site ProPublica is the latest organization to add WhatsApp to its reporting toolkit.

The news site is using the chat app to start a conversation with Liberian citizens and anyone interested in its recent investigation into American company Firestone's role in Liberia's civil wars in the 1990s.

The investigation, Firestone and the Warlord, revealed that the company, once the largest employer in Liberia, provided resources that benefitted the rebel army led by Charles Taylor.

This is ProPublica's first WhatsApp experiment, and comes at a time when Senior Engagement Editor Amanda Zamora has mobile trends on the mind.

"I've been thinking a lot over the last year about the rise of mobile, and ways that we can thoughtfully use mobile tools for longform storytelling and engagement at ProPublica," she wrote in an email. "We've been watching news organizations like the BBC and Brazil's Extra experiment with WhatsApp for both distribution and engagement, and thought our Firestone investigation - which is set in Liberia - presented a great opportunity for us to engage an international audience."

Working in collaboration with PBS Frontline, the investigation lasted several years, resulting in a story that hovers around 20,000 words. To keep readers interested, ProPublica is serializing the story into seven chapters, and will be promoting a new chapter each week.

"We were also interested to see if we could unpack a huge investigation, in terms of length and media-rich elements, in a way that mobile users could very easily digest," Zamora said. 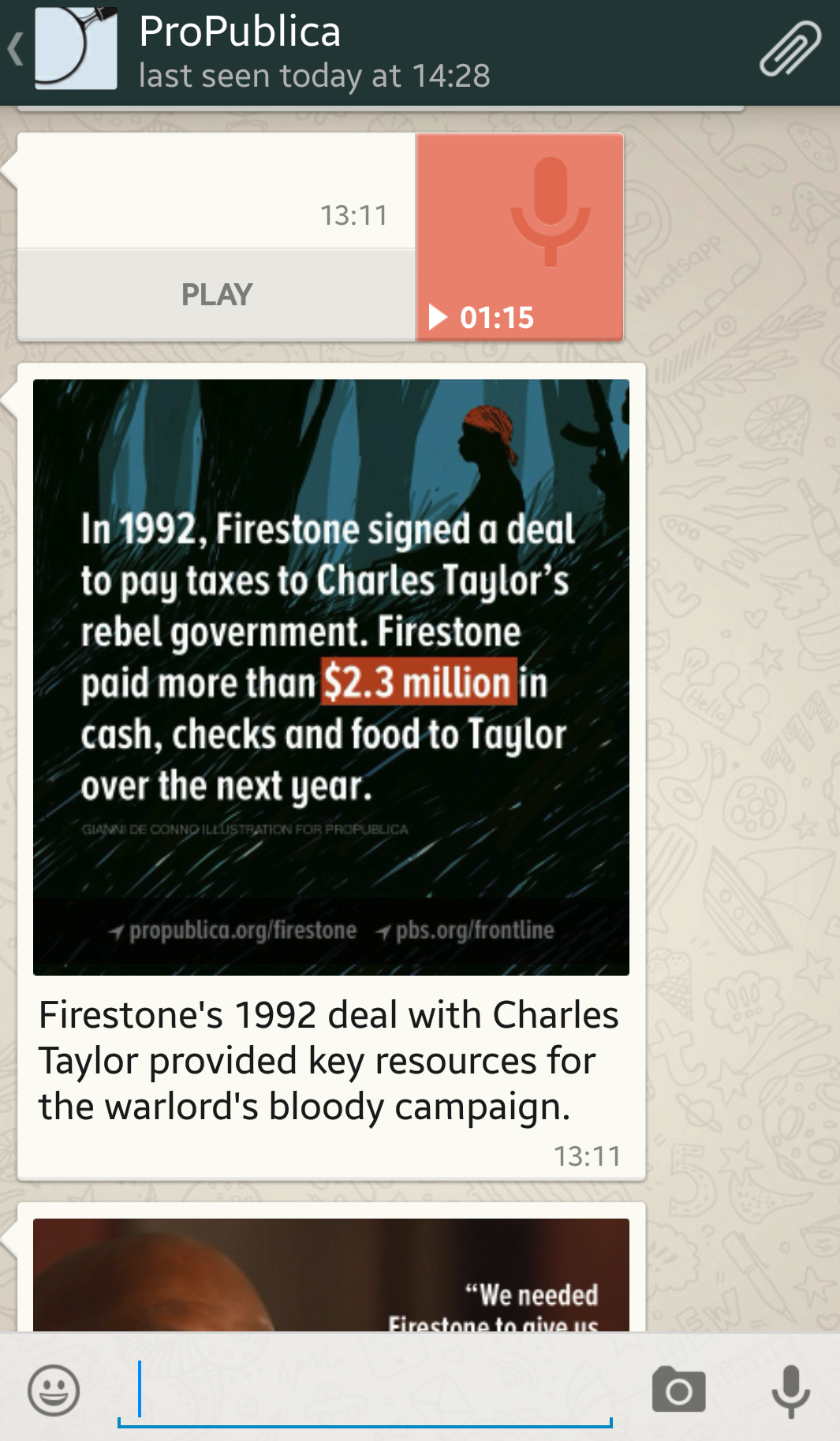 Anyone with an interest in the investigation can subscribe to receive updates on WhatsApp. Users will receive a summary and link to each chapter, discussion questions posed by the investigation's author T. Christian Miller, excerpts from the chapter - including either text, image or audio - and the chance to ask Miller any questions about the story.

The first batch of messages from ProPublica included an audio introduction by Miller, outlining what kind of updates to expect during the week. He posed two questions at the end of his audio recording - like "Should we even be talking about this case 25 years later?" - and asked users to share their opinions. At the end of the week, the app featured top questions asked by WhatsApp users and Miller responded to each with audio recordings.

"Getting a text on your phone is pretty intimate and personal, [and] we want our response to mirror that and thought that people hearing [Miller's] voice would be a good start," wrote ProPublica's Community Editor Terry Parris Jr. in an email. "We’re also finding that the audience seems to be a bit more engaged."

Additional updates included images of interviewees from the Frontline feature with brief facts about the investigation and maps of the region.