On one of Bogotá, Colombia’s busiest thoroughfares, Calle 26, eight-and-a-half miles of dedicated bus lanes were set to be constructed between 2007 and 2009. But a severe, two-year delay in the construction caused paralyzing traffic and chaos throughout the city.

Eventually, a complex corruption network involving public officials emerged as the cause of the delays, as well as the loss of hundreds of millions of public dollars — and the public's trust.

A new, data-driven news initiative wants to empower citizens to change that reality, by giving them the tools to track public works in process as well as advocate for new projects where needed.

When it launches later this year, the Yo Intervengo (or “I Intervene” in English) mobile app will give citizens an option “besides simply complaining,” says project designer Roberto S. Jalkh. “The idea is to give people tools so they can oversee these works, allowing them to ask, for instance ‘when should it be ready?’ We’re putting transparency in the processes of public contracts.”

Jalkh and his team conceived the idea during The Money Trail (La Ruta del dinero), a regional hackathon held in a dozen Latin American cities and in Miami. ICFJ Knight Fellow Mariano Blejman and Hacks/Hackers Latin America organized the event with the support of Knight Mozilla Open News, ICFJ and the World Bank Institute. More than 320 people, including journalists, developers and designers involved in citizen engagement and data journalism innovation, participated. 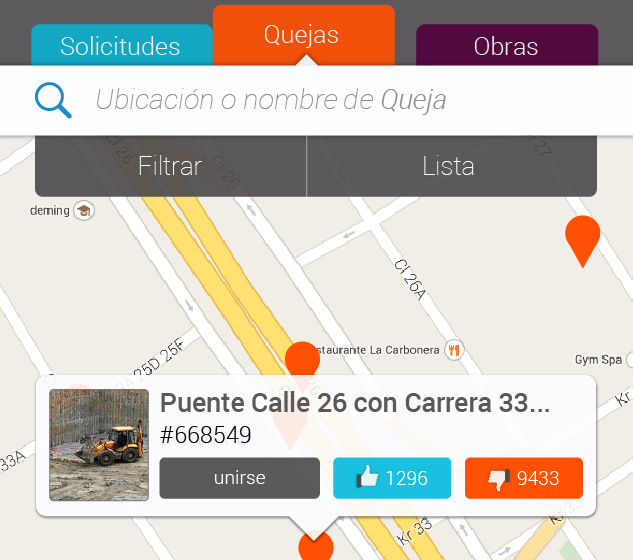 Yo Intervengo was one of five Ruta del Dinero projects that won US$2,000 at the end of the event. From those five projects, HacksLabs.org, the first data journalism accelerator in Latin America and another part of Blejman's fellowship, chose Yo Intervengo as the top winner and awarded US$10,000 so the team can expand the project. Now, the Yo Intervengo team, made up of three developers, a designer and a journalist, are dedicated full time to the project.

To populate the app, they’re using public contracts data from Colombia’s government database of public contracts. As it exists on the government website, the data is comprehensive, Jalkh says, but it’s hard to navigate and not user-friendly. Yo Intervengo is pulling the data and putting it into an easy-to-use, sorted database. The team is also toying with crowdsourcing the organization of certain data points, namely the location of public works, similar to the way Argentina’s La Nación asked readers to help sort through PDFs of senate spending.

From there, users can browse and search for public works projects using various filters. Users will be able to leave comments to share their experiences of the human impact (or lack of progress) on the projects.

In a future version, the team envisions the tool will also allow people to request that the government build specific projects the community needs.

People could make requests "if you need to cover a hole, fix a light on the street, or build a bridge so little kids can get safely to school,” Jalkh says. “If people really need something, they should be able to get together to demonstrate the needs they have.”

Team member and journalist Daniel Suárez Pérez thinks the app could also become valuable to newsrooms, which could use it to connect directly with citizens, to learn about their needs and where projects are languishing, and to share that information with a wider audience.

“This is a social project,” Perez says. “We want to give a voice to people who might not feel they have another way to express themselves. We want to get closer to solutions.”

The team is currently looking for partner organizations. Their hope is to make the product scalable and useful for other countries and contexts, both in Latin America and in other regions of the world.