Three of the speakers at the International Symposium on Online Journalism changed the way I look at the business of journalism: Jim Moroney, CEO of A.H. Belo and publisher of the Dallas Morning News; Valtteri Halla, chief technical officer at Leia Media in Finland and Jim Bankoff, founder and CEO of Vox Media.

Here is what got my attention.

Jim Moroney of the Dallas Morning News gave a memorable illustration of the value of digital versus print advertising to the journalism business.

The newspaper's digital products draw 40 million page views per month. That may sound like a lot, Moroney said, but local news doesn't scale on the Internet. That is, there is no global growth market for a news product focused on Dallas or even Texas.

So even in a best-case scenario, the revenue potential of digital advertising compared to print is miniscule. Moroney said if he sold out every display advertising space every month, and if advertisers paid top dollar (US$8 per CPM), those 40 million monthly page views would generate only $7.6 million over a year, less than 2 percent of the total revenues for the Dallas Morning News.

Now that was surprising.

Moroney pointed out that while some publishers like Advance Publications have reduced home delivery to three or four days a week (the Oregonian, New Orleans Times-Picayune and Cleveland Plain Dealer), others still see value in print.

Then there are hedge fund investors like Alden Capital's Randy Smith, who invested heavily in newspapers but now appears to be growing impatient, as he cuts staff and costs.

A news executive's dilemma, Moroney said, is that while the news business is clearly moving toward digital and multimedia production, print is still producing significant revenue. What strategy do you adopt to balance those conflicting pressures?

As he and his fellow panelists pointed out, many media outlets are diversifying revenue sources, from direct sales of products to special events to premium information services. And they are embracing social media as a way to expand their audiences.

Create a product that solves a global problem and you could have a business. Valtteri Halla of Leia Media showed the audience at ISOJ a paper-thin, light-powered e-reader that a Finnish newspaper is testing as a way of delivering news to readers in remote areas.

The LivePaper gets its electric charge from natural or artificial light. Because it is a single-purpose device -- it displays a newspaper -- it is simple in design and construction. The screen is 9.7 inches long and displays full color. A cloud-based media server delivers the content to the device. "Where there are radio waves and sunlight, there are updates," Leia's website declares.

Why this device and not a tablet? It's cheaper, for one thing. Some publishers have tried selling subscriptions by offering a free tablet as an incentive, but the length of the subscription commitment required and the price have not been popular.

Halla was evasive when asked how much each device costs. "If you order a million of them, I can give them to you cheaply," he said.

Publishers could format their product to work like an online version of the newspaper or like a tablet application, he said. The device could also be used in education to deliver lessons and books, Leia Media says, especially in remote areas of the world where it would be expensive to set up computer centers.

Halla also showed a cardboard model of a foldable digital screen that a reader could carry in his pocket. Foldable computer screens are not far off, he said. Now that would be a game-changer.

Jim Bankoff, CEO of Vox Media, described a digital media world in which the future winners will be those with high-quality branded content. He is running against the current here. He has the old-fashioned idea that you need to pay competitive salaries to attract top digital-journalism talent, and that you can make money doing it. 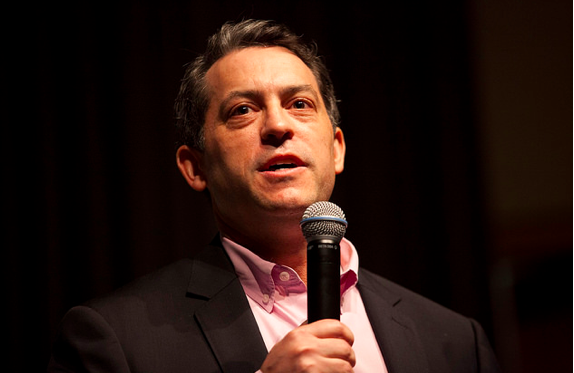 While he sees the most popular news sites on the web as chasing page views with sensational headlines and clickbait -- Huffington Post, Buzzfeed, others -- his emphasis is on quality of audience rather than quantity. "Now is the time for branded content."

High-quality branded content is the strategy behind the seven media brands that make up Vox, including the SBNation sports site, The Verge's technology coverage and the new Ezra Klein product that focuses on general news, Vox.

As a business model, it's working, Bankoff told the ISOJ audience. They are attracting "a new generation of news consumers" that has been turned off by traditional media. The audience is young, highly educated and has high income. Six of the seven brands are profitable, the exception being the newest one, Vox, which just launched with a staff of 20.

The sites were drawing 79 million unique visitors a month at year-end 2013, and the business has attracted US$74 million in venture capital (thanks to Maite Fernandez for that research).

In his brief history of Internet journalism, Bankoff described the current chasing of page views as "a race to the bottom," in which publishers are trying to make money by highlighting sex, celebrities and scandals while paying little or nothing to bloggers and interns.

Bankoff describes Vox's business strategy as "quality at scale." To achieve that, Vox Media hires digital natives who understand how to use technology and social media to create a scalable audience for the kind of truth-telling journalism that is expensive to produce. "We want great journalists who are hackers."

Part of that strategy has been to develop a proprietary technology platform, Chorus, that allows users to embrace conversations around the topics of the seven verticals. Bankoff said that he did not want to be too dependent on platforms like Google -- "you have to write headlines a certain way" -- or Facebook -- "they could change their algorithm tomorrow". You have to control your technology to control your destiny, he said.

Another part of the strategy is to create more attractive and effective web ads. Much of web advertising is ineffective because it is ugly and unimaginative, he said. "Let marketers and advertisers tell their stories in creative, appealing ways. Embrace talent, embrace technology, embrace the web and you can have attractive, beautiful stuff."

This post originally appeared on the blog News Entrepreneurs. It is published on IJNet with the author's permission.

James Breiner is a consultant in online journalism and leadership. He is a former co-director of the Global Business Journalism Program at Tsinghua University and a former Knight International Journalism Fellow who launched and directed the Center for Digital Journalism at the University of Guadalajara. He is bilingual in Spanish and English. You can follow him on Twitter here.