There was once a time when newspapers editors did not really believe in solutions journalism, a type of journalism that chooses to cover effective, successful responses to current social issues over tales of failure and tragedy. They thought readers would not be interested.

But in 2008, Libération, a major French newspaper, agreed to let Christian de Boisredon give it a try. He was given the opportunity to run a special solutions issue on December 26 — traditionally the worst sales day for newspapers. Libération journalists declined to take part in the initiative, so de Boisredon asked some freelancers to write for the issue.

The result was the year’s top-selling issue.

“The [journalists at Libération] expected superficial and naïve topics,” says de Boisredon. Yet he managed to convince a traditional and powerful newspaper that solutions journalism was a new approach they could and should not ignore. 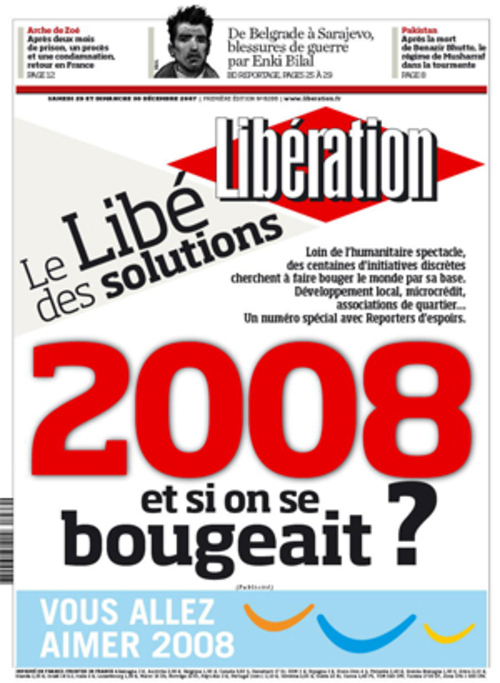 De Boisredon is not the only one convinced of the effects of solutions journalism. Calum Macdonald, former digital editor at The Herald Times Group, a major British media group, decided to take the next step and start a new, solutions journalism-based media outlet. Positively Scottish was born.

According to Macdonald, Positively Scottish wants to “find and tell stories I fear are being missed as our mainstream media contracts fast.”

The site’s story on the abuse of a young LGBT woman and her partner on a train in Scotland highlights its different approach. Positively Scottish decided to cover the consequences of the abuse, and how the woman decided to create a Pride event to celebrate equality.

“Without wanting to sound messianic, [I want to] bring a bit more positivity to the surface,” Macdonald tells IJNet. “Yes, there are real problems out there, but there are also amazing, effective solutions.”

Solutions journalism is gaining traction around the world, but it is still challenging to convince journalists working in traditional media to accept this new approach.

De Boisredon recalls an anecdote about Algeria’s El Watan. The first year they participated in Impact Journalism Day, editors had trouble finding journalists willing to write an extra article about solutions. But the second year, they all wanted to write the article because they found the initiative amazing, de Boisredon says. They even had to have an informal contest in the newsroom to choose the person who would write the piece.

Solutions journalism is not only about highlighting answers, but also delving into the problems.

“These stories are not good news or ‘feel-good’ stories,” explains de Boisredon. He agrees that they can make readers feel better, but that it is not why they were written. Solutions journalism is not a more superficial approach to journalism, he says.

“Stop and think, and don’t dismiss solutions journalism as ‘fluffy’ and not ‘real’ journalism,” advises Macdonald.

An answer to the media’s problems?

Solutions journalism is maybe in itself a solution to the numerous problems facing the media world.

For the past six years, Sparknews has met and discussed with editors from different media about the impact of solutions journalism pieces. Swiss newspaper Tages Anzeiger has received positive feedback from readers. Their editors are now wondering if solutions journalism could be the key to increasing their audience. The Asahi Shimbun, a leading Japanese newspaper, noticed a spike in young readers on Impact Journalism Day. Other media have noticed advertisements can be sold for prices as much as five times higher. Advertising agencies prefer seeing their products surrounded with articles proposing solutions to society rather than focusing solely on the issues.

With readership and viewership of traditional news on a decline everywhere, Macdonald is dubious about its future — but says it can’t hurt to pursue solutions journalism as a survival tactic.

“Can we really say the traditional way is still working when the industry is struggling so badly across the world?” he says. “Maybe it’s worth trying an alternative.”