The shaky smartphone video problem was apparent even at the dawn of smartphone journalism in 2007. Digital journalism expert Kevin Anderson commented on a meeting held by smartphone newsgathering pioneers Reuters and Nokia in late 2007.

"The phone is a bit difficult to hold steady, which isn’t surprising – it’s not like balancing a hefty traditional TV camera on your shoulder, which provides some stability. I’ve experienced this same problem myself, first hand, doing a video journalism project for the BBC in 2003. I used a Sony PD150, a "pro-sumer" digital video camera. Doing handheld work takes practice because the light camera is much easier to shake, despite built-in motion compensation."

Anderson’s Sony camcorder weighed ten times more than an iPhone - which weighs a svelte 4.1 ounces - and was designed for a shoulder mount. So how much tougher is it to steady a smartphone that is feather light and not designed for news coverage?

In the '60s, a majority of television reporters - the original video journalists (VJs) - shot their own film with key-wind, hand-held, 16 mm Bell & Howell cameras. At eight pounds each they weighed as much as 31 iPhones but provided very stable pictures.

The connection between weight and stability is related to Newton’s Third Law of Motion. Heavier objects at rest resist movement more than lighter objects. And once in motion heavier objects react less to, say, a VJ's jitters.

To reduce and thus dampen shake for static, hand-held shots, I recommend adding at least another pound to smartphone stabilizing rigs. Add another two or three pounds to achieve a poor-man’s steadicam effect for stories that necessarily involve a lot of panning or trucking (moving) shots. (One-pound lead ingots can be sourced on eBay.)

Keep your feet at least shoulder-width apart. Hold and steady the smartphone with both hands while keeping elbows tight to your ribs. Concentrate on keeping your body motionless. Breathe in and hold your breath just before beginning the shot and, when possible, continue holding it for the shot’s duration. Breathe slowly and carefully during long takes.

The more stable your body, the more accurate the shot. The standing position, one most of us use when shooting most news footage, is the least stable, but the quickest and easiest to assume. Kneeling yields more accuracy. Sitting is even steadier than kneeling. The prone position, with elbows on the ground, is the most stable. There’s no law against shooting news footage from the kneeling, sitting and prone positions.

Because image stabilization consumes battery power and because it should be turned off when using a tripod, many VJs may want to leave it off all the time. That way they’ll use more of the sensor’s pixels that are otherwise reserved for stabilizing images. (Digital stabilization throws away pixels, sometimes causing a noticeable drop in image resolution.)

Experiment with stabilization turned on and off. You may find you can shoot steady video without any electronic stabilization. 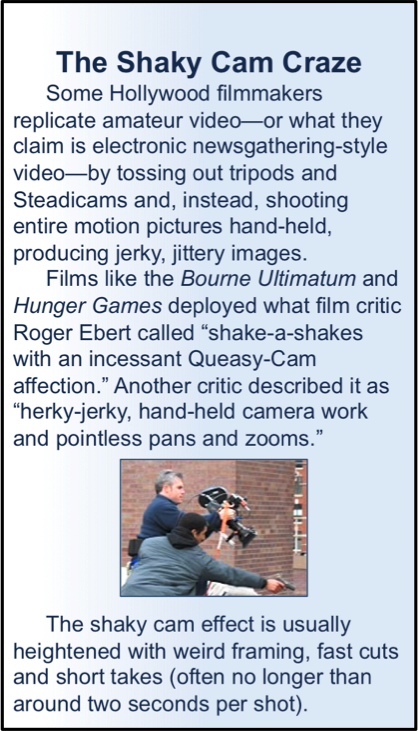 The camera’s aperture affects stability. Digital and optical stabilization mainly come into play in low light situations, when the camera’s auto exposure opens the iris to let in more light. The depth of field is reduced and the image becomes much more vulnerable to shaking and jiggling.

The trend, with a few setbacks along the way, has been to make newsgathering equipment smaller, lighter and cheaper while capturing increasingly higher quality video.

iPhone resolution, for example, has climbed steadily from standard definition (SD) 240 to SD 480 to high definition (HD) 720 to HD 1080 and, no doubt soon, to ultra high definition (UHD) 2160. My iPhone 5 can shoot 1080, but I still shoot most footage at 720 for online distribution. Well-shot video (good framing/composition, lighting, exposure, focus, stability) at 720 is a win/win, producing good-looking shots that don’t take up too much of the pipe.

Compelling news video at very low resolution is frequently shot on smartphones by so-called citizen journalists or eyewitnesses. It’s video acquired without rigs or tripods and often with little regard for framing, focus, white balance and exposure. Stabilizing rigs, proper exposure, white balance and focus settings along with good framing can more than compensate for less than maximum resolution.

There is no excuse for VJs shooting amateur video. They should try to meet or exceed professional videography standards.