I’m sitting in my car in a freezing cold field in northern Missouri, waiting for a Phantom 4 Pro’s batteries to warm up so they can recharge. The car is littered with drone stuff — chargers, hand warmers, print outs of maps. But I’m also noticing how dependent I’ve become on my phone for a lot of information regarding how we fly with drones.

I’m not talking about the apps we use to fly the drones (though I have three on my phone). I’m talking about the apps that provide things like airspace clearances and maps and weather. There is no magic bullet app that does everything. And technology isn’t the sole answer to being a better drone journalist. But we’re safer when we remember that we’re pilots first and photographers second. These apps help get us there.

Unfortunately, there’s a lot of apps out there that aren’t good. So here are ones I use every day.

You’ll need a couple of these to stay legal. This class of apps will tell you what class of airspace you’re in and if there are any Temporary Flight Restrictions. Some apps have additional features like weather and solar activity indices, too, though I look for accuracy in terms of airspace first and then other features second.

I use ForeFlight, which is the only mobile flight logbook app approved by the FAA. It’s for the general aviation community (and at $100/year, it’s priced for it, too) but it updates the sectional maps each month, has detailed information on every controlled airspace and includes industry-common weather forecast METARs and TAFs — as well as translating them. It also has overlays for TFRs and weather. It can be lot of overkill, but it’s a great app.

Hover is a free app that provides airspace and weather information. It’s great for what you’ll pay for it — but I’ve found the mapping is inexact especially when you might or not be in controlled airspace. In that case, I’ll go to DroneMaps, which is a bare-bones app that does one thing well: It has the FAA’s UAS grids in it, so you can see where an airport’s controlled airspace is and how how you can fly in it.

KittyHawk, which is free, has this functionality, too, and is more of a soup-to-nuts solution. Its airspace maps are integrated into its LAANC (Low-Altitude Authorization and Notification Capability, or automated permission to fly in controlled airspace) functions. KittyHawk has positioned itself as a provider of everything, from checklists to risk assessments to airspace clearance. So its app — which has recently become free to individual users — has a lot of functionality. 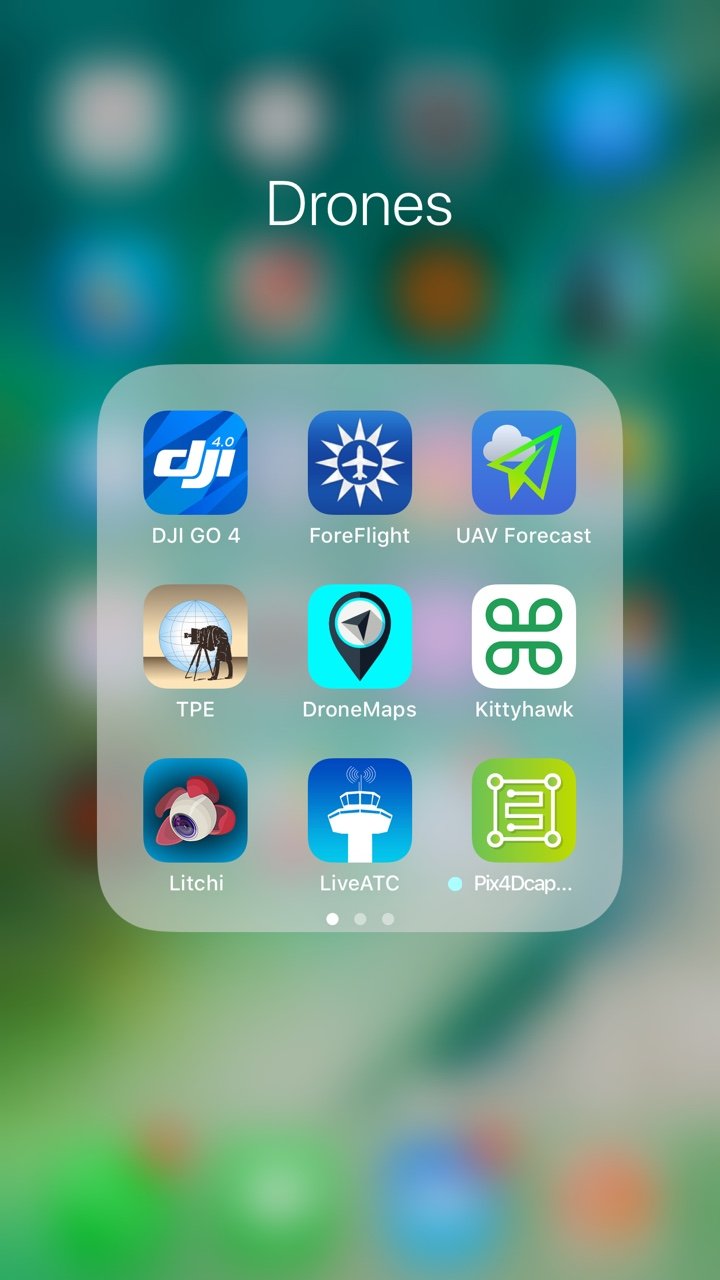 There are so many. And there is such overlap between all of the above apps and straight weather apps that it’s hard to define a strict weather app. For what I like to call “regular people weather,” I like Weather Underground since it shows me hour-by-hour when it’s supposed to rain. Most of the time, I just look in ForeFlight. For flying, I’ll often use METARs Aviation Weather which, just like its name says, provides METAR reports for your choice of airports. I’ll also use UAVForecast for its very convenient grid of forecast flight conditions. A word of caution on this app: Its maps can be out of date.

The above apps are nuts-and-bolts functional apps to help you pilot safely. But there are other apps that help you do better drone journalism.

I use TPE — the acronym for the terribly named The Photographer’s Ephemeris app — almost every time I fly. It shows me the angle and direction of the Sun at any place on Earth at pretty much every time. It has 3D maps so I can see, for instance, if I’m going to be shooting in a valley or atop a ridge’s finger. Drone filter and gear maker Polar Pro makes a useful app that does a couple things: It shows you how much time until the next Golden Hour — when we get that lovely soft, diffused light that fixes all the sins in the world. It also has a filter calculator so you can put in either what filter you’re using or what shutter speed you want and it will calculate the other value for you.

Then there are the autonomous apps. For mapping and for gathering photos at regular intervals, I used Pix4D Capture, which is the free autonomous flight app for the very pricey Pix4D mapping software. It automatically flies photo (not video) missions taking pictures at whatever intervals you want. It also has a very handy free flight mode where you can hand-fly the drone while it’s taking pictures every few feet. It’s really nice for modeling. For a more cinematic approach, there’s Litchi. Litchi is an autonomous flight program that lets you program waypoints in, telling the drone to fly at X altitude to Y location and turn on its camera at whatever angle you want, then fly to the next one and the next one and so on. It allows you to make very precise, complex flight plans — and it saves them so they can be repeatable from one day to the next. It’s very handy if your news outlet is doing, say, a progression of a major building and you want to build a time-lapse video over the months.

This post was originally published by the Reynolds Journalism Institute (RJI). It was republished on IJNet with permission.

Judd Slivka is RJI’s first director of aerial journalism. He is also an assistant professor of convergence journalism at the Missouri School of Journalism.