Four digital journalism pioneers in Latin America have four different solutions for the problem of how to finance an independent news organization.

For Daniel Moreno, director general of Animal Politico in Mexico, one strategy has been to launch a brand extension called Animal Gourmet, a publication about fine dining, which attracts a new group of users and advertisers.

Jorge Zepeda Patterson, founder and publisher of Sin Embargo (On the Other Hand) in Mexico, has patient investors and a model of online advertising.

For Juanita Leon, founder and publisher of La Silla Vacía (The Empty Chair) in Colombia, the solution has been constant innovation. Besides landing grants from NGOs, the site generates revenue from its club of Super Amigos, from universities, and from sponsorship of online discussion groups.

And Oscar Castilla, executive director of a new investigative journalism site in Peru, Ojo Publico (Public Eye), is still looking at many possibilities, including support of universities and NGOs.

All of these print news veterans have bet everything on digital journalism and discussed why they have done so during a roundtable discussion that I moderated at the Third Latin American Forum on Digital Media and Journalism Oct. 9, hosted by the Center of Economic Research and Training of Mexico. (Here are videos of all the sessions, in Spanish.)

Moreno, founder of the magazine Cambio and formerly an editor at the daily Excelsior, said he prefers digital journalism to the old model. Digital journalists can have a conversation with the public as though "among equals," he said, and learn about the topics that really matter to them.

Animal Politico was founded four years ago. For the first year it was just a Twitter account that "tested the waters to see if there was a market" for a different kind of journalism, he said. The founders wanted to see what kinds of tone and topics resonated with the target audience of millennials, 18- to 34-year-olds who did not trust or read traditional media.

Animal Politico by the numbers:

Moreno said that the brand extension Animal Gourmet was launched to attract new advertisers, in particular small businesses. "Small businesses are more creative, more inclined to experiment with programs in social media." Today, 70 percent of Animal Politico's revenues come from small businesses. Big advertisers shy away from the controversial investigative reporting that Animal is known for.

The publication, whose slogan is "rigorous journalism," was founded in 2011. 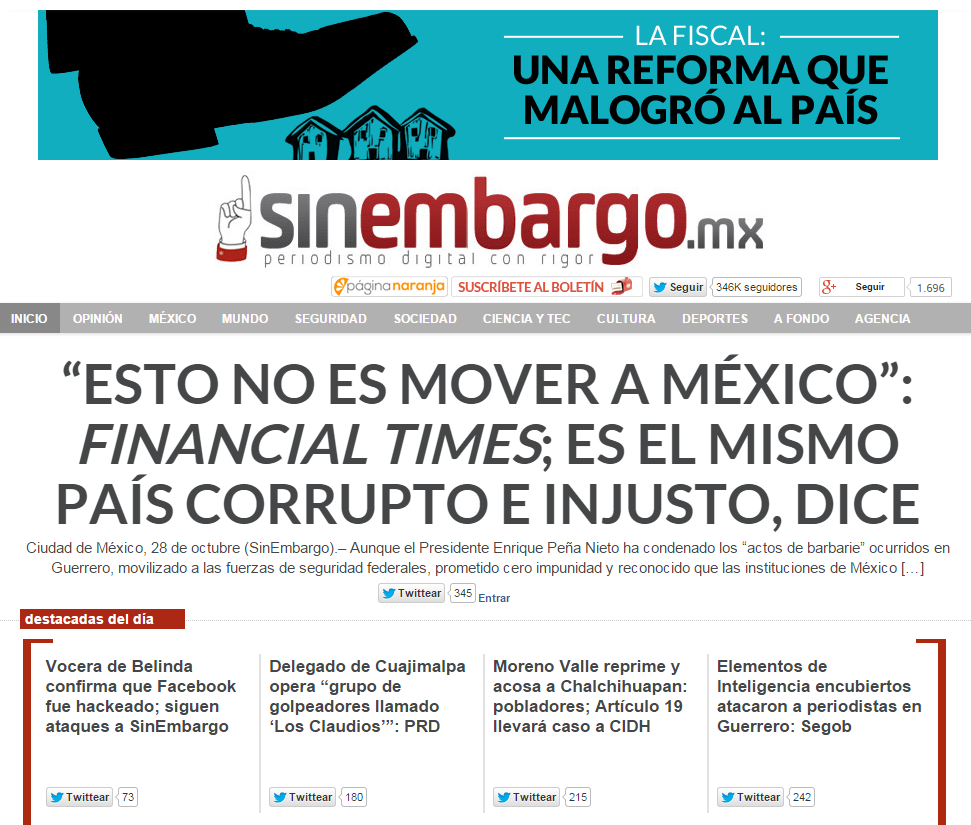 Zepeda Patterson is former editor of the daily El Universal and currently is a columnist for El Pais of Spain and some 15 dailies in Mexico. He said one of the difficulties digital media face is "the inertia of businesses and institutions" whose leaders are still living in "the analog world" of print and prefer to see their ads there.

Sin Embargo by the numbers:

Zepeda Patterson said that the ad revenues have doubled every year and that the traffic of Sin Embargo ranks in the fifth or sixth place among digital news media in Mexico.

His goal is that by 2016, the traffic will surpass that of two major daily newspaper sites, Excelsior and Milenio. In the nearer term, the plan for 2015 is to expand to 63 employees and to cover 60 percent of operating costs, up from 40 percent.

While many digital news operations try to survive by aggregating content from other sites, Zepeda Patterson believes that "the only possibility for generating significant traffic is by creating your own content."

This investigative journalism site in Colombia has been an innovator both in creating new narrative forms and new revenue sources.

But at the beginning five years ago, "All we thought about was the journalism, not the business model," Leon admitted.

At La Silla, they tried various ways to generate income, including offering consulting on digital media to third parties. Eventually, they abandoned that model because of the amount of time it took them away from their core mission of developing an independent news voice.

The goal and the mantra became, "Earn money while we sleep." So they decided to focus on creating a stronger community among their loyal users. "It is easier to monetize a community than a bunch of clicks."

Three years ago, La Silla created the club of Super Amigos, whose slogan is "to defend independent journalism" and whose members have generated US$50,000 for the publication.

The Ford Foundation sponsors a section of the site devoted to coverage of the mining industry, particularly its environmental and social impact.

La Silla also offers universities a subscription to a service called IQ de la Silla, in which they can put reviews of their books online. And it has created sponsored events, notably a series of public debates hosted by a university.

In November La Silla is going to open a series of sponsored online discussion forums. A leadership organization is on board to sponsor a forum about leadership.

La Silla by the numbers:

The site offers consulting to other independent media in everything from administration to editorial to financing and sells a book with all of these lessons.

On the journalism side, La Silla has used data journalism to tell stories in news ways, such as mapping the interconnections among the super-powerful families, businesses, and politicians who exert undue influence on the critical issues that affect the country.

Castilla admitted that before starting this investigative site in Peru, he spent little time in social media and knew nothing about the business side of media.

He has had to learn many new things, including a saying used by programmers: "Done is better than perfect." In other words, you have to focus on the big picture and move forward even if all the details of the platform are not yet perfect. 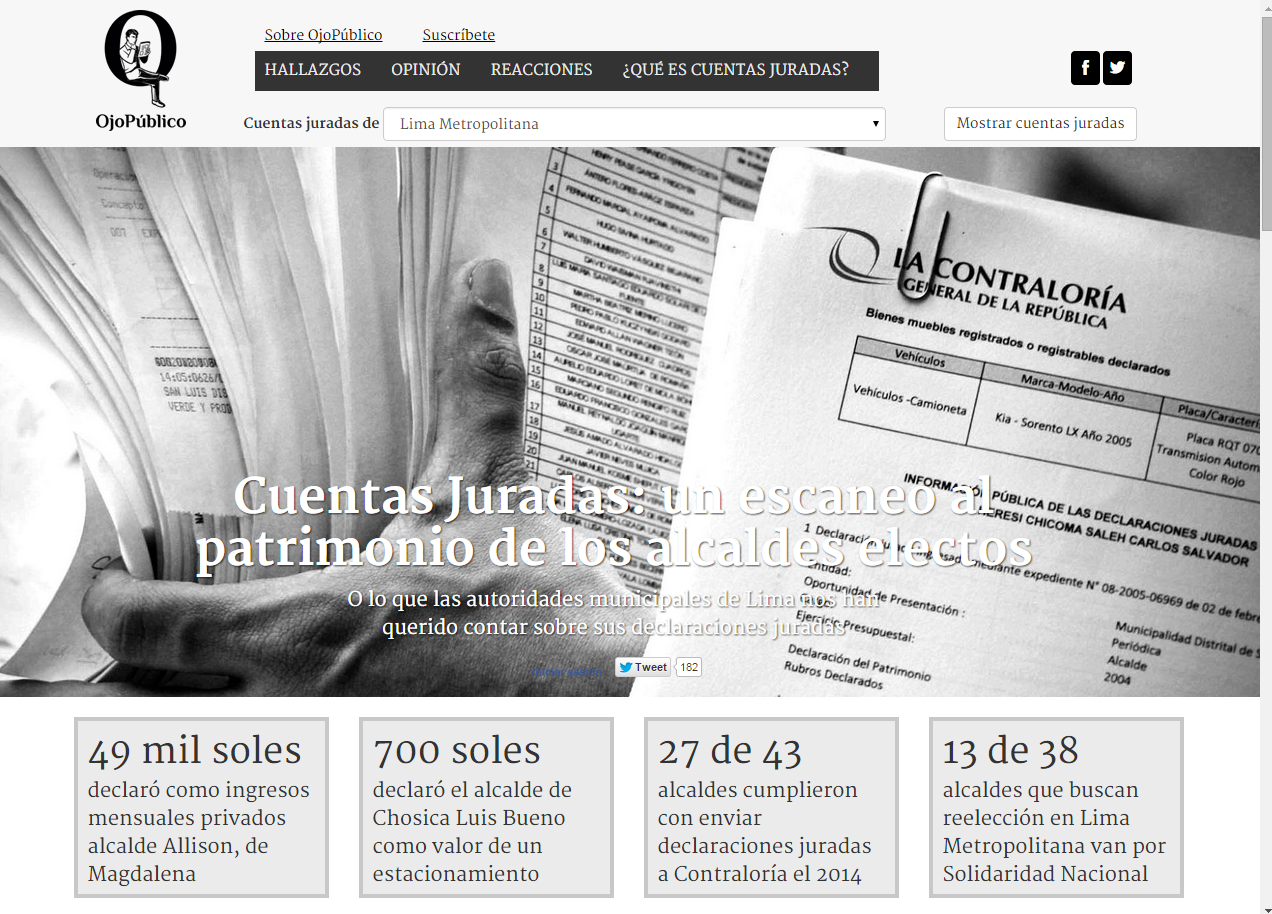 For Castilla, an advantage of digital journalism is the ability to publish hard data like the financial disclosures of all the mayors of the Lima area.

Among the things that digital journalism entrepreneurs have to keep in mind, Castilla has learned, are:

A member of the audience asked the panelists if they were considering accepting native advertising or sponsored content as many publications in the U.S. and Europe have started to do.

Sin Embargo has not considered it, Zepeda Patterson said. "It means walking a tightrope and it is a very dangerous path" in which a news outlet risks damaging its credibility.

La Silla's Leon agreed. "We don't accept sponsored content, nor do we create content for third parties," she said. "I'm allergic to it."

For Moreno of Animal Politico, it is a question of being open and honest with users about what constitutes editorial and what is advertising. Animal Politico has gone as far as publishing press releases from the country's president, which are clearly labeled as paid advertising. The important thing, Moreno said, is that the user should have no doubt about which is which.

The future of digital journalism

All four panelists (and the moderator) are optimistic, in spite of all the challenges and uncertainties.

"We're in Animal Politico because it's a place where we can realize who we are. We're not part of some giant business with extremely complicated business interests. Here we can broach the subjects that interest us and that we think are worthwhile. [In digital media] you are going to work three times harder but you will have three times more fun."

Zepeda Patterson observed, "I am most optimistic for the sites that have specialized content. There are opportunities in niches, in the portals aimed at small communities and advertisers who are interested in reaching those communities."

Castilla offered encouragement to those in the audience who might be thinking about starting their own media. "This is a historic moment," he said "Go for it. It doesn't matter whether it's a blog or a website. Do it, is my recommendation."

This post originally appeared on James Breiner's News Entrepreneurs blog and is republished on IJNet with permission.