Journalist of the month: DJ Yap

Filipino journalist DJ Yap has been telling stories since he was young. He held a leadership role in newsrooms early in his life, as an editor for his school newspaper in elementary school, high school and university.

Now Yap is a senior reporter for the Philippine Daily Inquirer, a popular daily newspaper in the country. However, despite his early journalistic roots, he didn’t immediately choose reporting as a career.

“When I was doing my college applications, I did not really consider journalism at all,” he said. “My thinking at the time was that I wasn't going to make any money off of this, and I thought that I wanted a more lucrative career.”

He gave medicine a try, but soon realized that it was not the career for him.

“It only took me a couple of years to realize that I wasn't cut out to be a doctor. I transferred to the journalism department and I have not looked back since,” said Yap.

During his final two years of school, he had a scholarship from the Inquirer, so it was only natural that he tried to work there after graduation. He was first hired to work as a researcher, just a couple months after graduating, and has been with the paper ever since. Along the way, Yap has worked his way up different beats, and he will be celebrating 15 years with the paper in July. 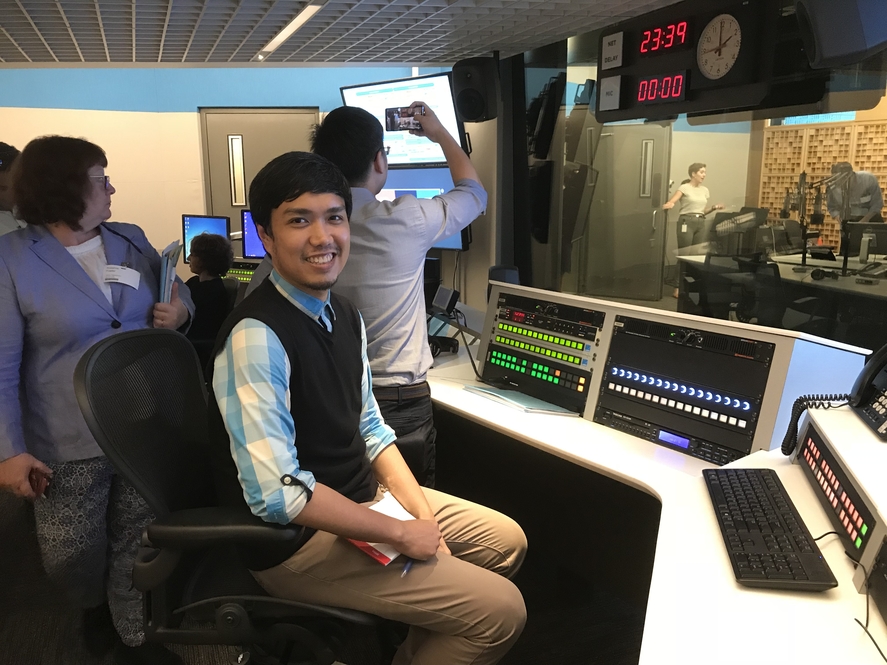 Yap currently reports on the Philippine Legislature, particularly the Senate. He focuses on proposed and pending legislation on federalism, same-sex unions, divorce and other controversial subjects.

He is also working on a longform piece on the conflict in Mindanao, an area in the southern part of the country.

“I'm planning to do a piece on Indigenous peoples who are caught in the crossfire [of] this conflict between the Christians and the Muslims, considering the fact that they are the ones who have been there all along,” said Yap.

For the story, Yap plans to use some of the tools that he gained from the East-West Center’s Senior Journalism Seminar, which was a fellowship that he found through IJNet. The program focuses on the role of religion in the public sphere, specifically in terms of U.S. relations with Muslim-majority regions. He spent several weeks in Sept. 2018 traveling to different parts of the U.S. and Tunisia, examining the diversity of religious identity, meeting with government officials and exploring the media’s role in stories with religious elements.

“I'm going to use the contacts, resources and materials [from the fellowship], in order to give more depth to the story,” said Yap. “It's a story that can resonate in all places where there is religious conflict. There are many universal themes from that fellowship that I can apply to the kind of journalism I do in the Philippines.”

We spoke to Yap about what IJNet means to him, the state of journalism in the Philippines and his advice for young journalists.

IJNet: What does IJNet — and being featured as IJNet journalist of the month — mean to you?

Yap: I was really excited by the chance to use this platform to speak to younger journalists. As a mature journalist, I want more and more to engage with young people and to find what they think of what's happening [in media], and this platform is really important. It gives journalists the chance to expand their worldview, to understand more of the world by seeing the opportunities that are available to them.

The [East-West Center] fellowship that I attended allowed me to interact and become friends with twelve other journalists from all over the world. I can pick any of their countries, go there and have coffee with them. In fact, one participant who became a close friend of mine, recently came here from Singapore. I showed him around, including the places that he normally wouldn't go. I think ultimately that is what IJNet can do for journalists. It connects journalists who may otherwise never meet. If I had discovered IJNet earlier in my career, I am sure I would be a better and more well-rounded journalist than I am now.

What do you think of the state of journalism in your country, the Philippines?

It's very challenging especially under the current administration, in the kind of climate that we have. The public has become distrustful of traditional mass media like my newspaper. People will say “fake news” or that we are just driven by certain political agendas favoring one party or another. It's very challenging and we find ourselves defending what we do. We have to show them that what we're doing is a public service. It's a challenge, also because the president has been quite active in deliberately attacking news organizations, singling out a number of [them], including our newspaper.

Do you have any advice for someone entering the field of journalism?

As early as possible, try to find your own unique voice in writing stories. I think we owe it to ourselves and to our readers to pay close attention to how we compose our piece.

The second piece of advice is connected to what I said earlier about threats facing the media industry: hang in there. If you are in journalism, I would advise you to stay put. I believe that at some point the tide is going to turn, and the public will realize that they need us, and they need journalism.

Images courtesy of DJ Yap. This interview was edited for length.