Matt Sheehan is the director of the Innovation News Center in the College of Journalism & Communications at the University of Florida. EducationShift talked with Sheehan about how the center hopes to make itself a model for existing and emerging newsrooms across the country.

How did the center get started?

The Innovation News Center has been an evolutionary process. The school has been thinking about what is coming next for many years. Ralph Lowenstein, who was a dean in the 1970s, faced some criticism for predicting what has turned into the digital age. The school has been making steps to prepare and to experiment in that realm. The center is a culmination of a couple different initiatives. About five years ago, they launched a project called the 21st Century News Lab, which was probably the immediate precursor to the center. It was a renovation to the old photo lab, down in the basement, to create what I call a “black-box newsroom,” allowing students and faculty to experiment with news across platforms. We started the project calling this the “convergence newsroom,” designed to bring together the news operations of the seven media properties the University of Florida controls. However, convergence has been around for, at that point, 15 to 20 years, and more often than not, wasn’t multiple media organizations working together, rather multiple media organizations residing in the same place. So when we started the Innovation News Center, we really wanted to make sure we were acting as one newsroom serving the seven properties.

What is the mission?

Our mission is three-fold. It is, of course, to provide the educational opportunities for our students, while simultaneously providing public service to the 19 counties in North Central Florida that we serve. The second part of our mission is to prove that a regional reporting hub can serve multiple properties. The third, in addition to the service and education, is to experiment and help drive what is coming next in an environment that is real world and has a real audience but may not have some of the pressures that more commercial news operations would have. 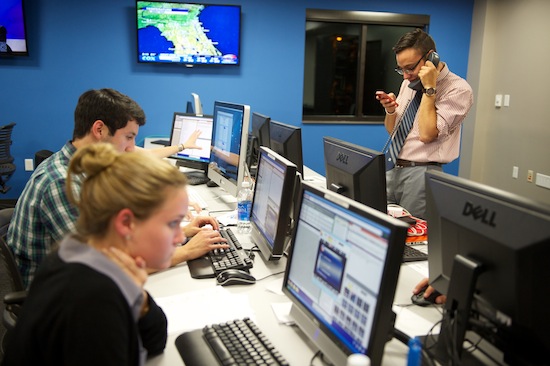 What makes the center different from initiatives at other universities?

We’ve done a lot of research in what other news entities are based in schools. Of course, you’ve got the traditional and well-known levels of Missouri with its commercial and newspaper operation. We’ve found that Florida is unique in that these are commercial and public licenses, they are real-world institutions, but they are located and headquartered and integrated directly into our building and into our curriculum. Over the last few years, we’ve purposefully integrated them even more to consolidate the operations. In the past, they’ve operated as individual units; now they are one media company based here in the school. While many schools have created the integrated newsroom or convergence newsroom, none had really powered that or combined that with the newsroom for the multiple properties. We are very much student-powered, which isn’t necessarily unique, but the scale is much larger — a 12,000-square-foot newsroom that is almost at 24/7 news. Students are working six days a week from about 4 a.m. to 8 p.m. and then students are monitoring outside the newsroom. Many schools are experimenting with it, but not to the scale that we are. Everything we do here is firmly baked into the curriculum. 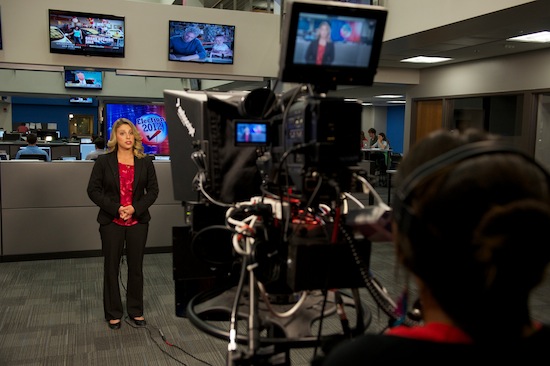 What do you do that produces award-winning work?

We cover the news. We certainly don’t go into this with the expectation that the pieces will win awards, we just try to do the best journalism we can every day. We generate about seven hours of broadcast content, consisting of two newscasts, weather operations, sports, news updates on radio for public and commercial stations, web updates and other web content. We think of ourselves as professional, even though our staff is student age. We tend to enter in more professional caliber awards than the traditional collegiate awards. We have had good showings in the Edward R. Murrow Awards and The Associated Press Awards. In the last two years we have had one of our students win the National Murrow Award. We are very proud of the work our students do, and we are happy that others find that content to be of high caliber, as well. 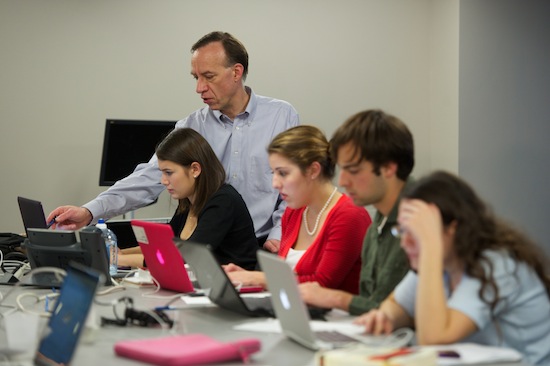 Why is the center important?

Going back to the three-fold mission, giving the students real-world experience with a real audience is important for us. For the public service, we live in a part of America that is probably not over-served. We’re not in a big city, we’re not in a major metro market. Most of our stations are between two traditional broadcast markets, so they aren’t as saturated as some of the larger markets. We want to create that top 10, top 25 market experience in Gainesville. And, of course, applied research — that we all need to do — as we try to figure out what is coming next for our industry. We are launching a research and development hub this fall, where we drive a lot of that applied research and test ideas without pressures that profit or even nonprofit news organizations have.

What do you hope that this kind of center can accomplish?

I hope that the center will quickly rise in profile. A lot of people hold up certain areas of leaders in digital innovation, a lot of which was happening here. Because Florida has been traditionally focused on serving Florida, a very large state, we don’t attract or bring as many people from out-of-state into our school, which hurts us sometimes when we are looking at a national profile. So hopefully, through the activities in the center, we can serve as a model for other established or emerging news organizations. They can work with us, and we can test stuff out so they won’t have to take the risk in finding new tools, techniques and models.

Lauren Simonis is a graduate of the University of Wisconsin-Madison School of Journalism and Mass Communication who just wrapped up her term as intern for the EducationShift section at PBS MediaShift.

Photographs of the Innovation News Center by Steve Johnson.