How has the pandemic affected journalism? New report offers a sobering snapshot.

The COVID-19 pandemic has impacted many journalists and newsrooms in one way or another. Whether it's burnout from working extra hours, layoffs at a local news publication, or misinformation spreading in WhatsApp groups, the health crisis has placed extra pressure on an industry already facing an uncertain future.

To better understand the effects of the pandemic on the news industry worldwide, the International Center for Journalists (ICFJ) – IJNet’s parent organization – teamed up with the Tow Center for Digital Journalism at Columbia University to conduct a survey of journalists in seven languages. Today, they released the preliminary results of their English-language survey, which are based on responses from 1,406 respondents across 125 countries.

The Journalism and the Pandemic Survey explores journalists’ physical and mental health, the spread of mis/disinformation, the economic effects on newsrooms, changes in the way journalists work and challenges to press freedom.

"Our report demonstrates that journalists are working in a severely pressured financial, physical and psychological environment during the pandemic," wrote researchers Emily Bell, Julie Posetti and Pete Brown. "This will be the most enduringly difficult professional period many have experienced during their careers."

We explore a few of the key findings below. Readers can find all 30 findings in the full report here.

Journalists are struggling to cope with the psychological toll of reporting during the COVID-19 crisis, researchers found.

The report lays bare the widespread extent of the issue: 70% of respondents rated the psychological toll as their biggest challenge during the pandemic –– the most common response. More than 80% of respondents noted at least one negative psychological effect, including anxiety, burnout, difficulty sleeping and a sense of helplessness. 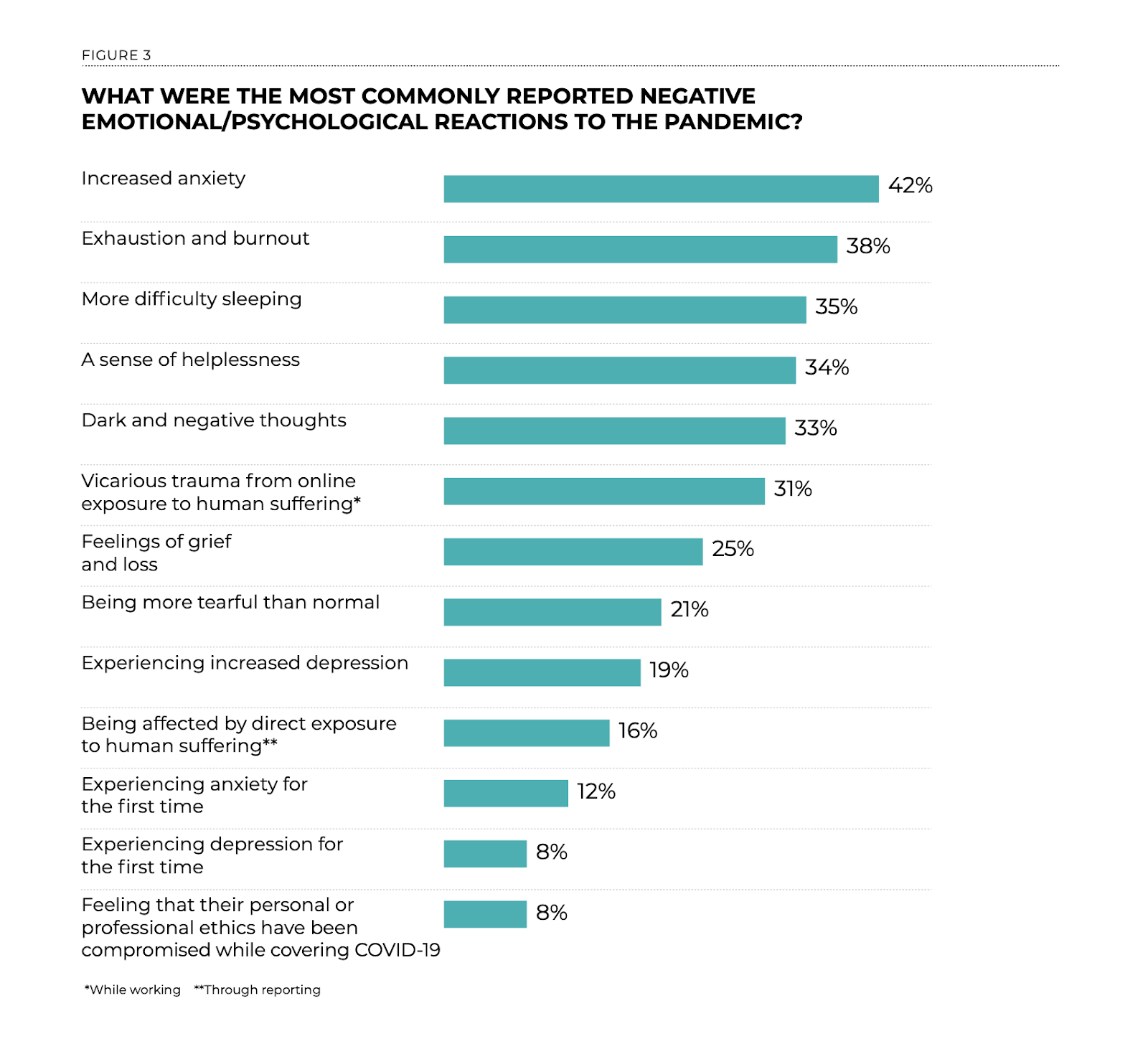 Despite the challenges, many employers fall flat in their level of support. Over 70% of respondents said that employers failed to offer flexible hours, time off, social support or regular check-ins, to name a few.

The data doesn’t indicate much better support for journalists’ physical health, despite the worldwide health crisis. One in four respondents are still traveling to the field at least once per week to report, yet many respondents noted a failure by their employer to provide adequate protective equipment for field reporting. Perhaps most shocking, 45% were not even provided a mask when they conducted in-person reporting.

[Read more: Mental and physical health of reporters during COVID-19]

As early as February, the World Health Organization cautioned that the world wasn’t just fighting a deadly virus, but an information crisis. This “disinfodemic” is no secret to the journalists tasked with providing factual information to their audience. Over 80% of respondents said they came into contact with misinformation on a weekly basis.

While regular citizens remain the number one purveyor of disinformation, political leaders and elected officials come in at a close second. This is particularly disheartening at a time when information can literally mean the difference between life and death.

Reporters are producing fact-checks (29%) and using digital verification tools (29%) to actively counter mis/disinformation during the pandemic. However, many journalists said they need additional training to adequately fight the disinfodemic. Almost 70% of respondents marked advanced verification and fact-checking training as their most pressing need.

The pandemic has inflicted significant economic damage on newsrooms. Researchers and media reporters around the world have  documented the impact in resources like “The Tow Center COVID-19 Newsroom Cutback Tracker” and Poynter’s running list of U.S. layoffs, furloughs and closures, in addition to stories tracking cuts, for instance, across African newsrooms. Still, so much is yet to be seen.

The report’s findings indicate that this economic crisis is top of mind for most industry employees. Three in four respondents said their first priority during the pandemic was the survival of their publication.

Underscoring the economic impact, almost four in five respondents with access to information about their newsroom's finances reported at least a 50% decline in revenue.

To cope, outlets are cutting back on content, shrinking salaries and laying off employees. Sixty-five percent of respondents said they have less job security now than before COVID-19.

Covering COVID-19 around the world has proven difficult — and even dangerous — according to the report. Many journalists report threats and restrictions that have an effect on press freedom.

For example, one in five respondents reported that online harassment was “much worse” than before COVID-19.

The pandemic has also had an effect on relationships with sources, as nearly half (48%) of survey respondents said sources were concerned that speaking to journalists would lead to negative repercussions such as job loss, legal consequences or physical violence.

Despite the many challenges, more than 40% of respondents perceived an increase in audience trust during the pandemic. Only 4% felt that trust declined.

One in four respondents experienced more positive feedback and received more engagement from their readers. This may have been a result of more dedicated engagement work from many reporters, as 24% of respondents reported spending more time identifying audience needs.

Making use of the findings

These findings provide a small window into this uniquely challenging time for journalism. They can help academics, researchers, industry leaders and media commentators begin planning for a post-pandemic future.

From mental health support to training opportunities, the results can also offer guidance to editors, publishers and other newsroom leaders looking to offer immediate support to their employees as they continue to cope with the ongoing crisis.

Additional reports analyzing the pandemic’s effects on journalism will be published in the coming months, including those from surveys conducted in languages other than English. Watch for these updates from the International Center for Journalists or follow IJNet on Twitter, Facebook and Instagram to be the first to know when new research is released.

Main image CC-licensed from Unsplash via Craig Whitehead. All other images are taken from the Journalism and the Pandemic report.

Taylor Mulcahey is the editor of the International Journalists' Network (IJNet).