In today’s digital media age, anyone with an internet connection and a social media account is now a publisher.

That’s why it’s more important than ever for media organizations to report responsibly and make sure that they gather the correct information.

This is often done under the guidance of experienced editors, whose job it is to ensure that journalists get a thorough briefing on story angles, questions to ask and things to watch out for before going out on an assignment.

But this is not an option for journalists working on smaller, less well-resourced community-based publications, often with a staff made up of inexperienced journalists and unpaid volunteers.

And then there are the millions of citizen reporters and bloggers who often find themselves at the frontline of breaking news. They may be able to share their stories instantaneously with a smartphone and a data connection, but most lack the training needed to ask the right questions and produce an accurate report of what they have witnessed.

With this in mind, Code for South Africa, which is led by ICFJ Knight Fellow Adi Eyal, has partnered with South Africa’s Association of Independent Publishers (AIP) to build a simple-to-use tool that addresses these issues.

The result is Pocket Reporter, a free Android app that operates as a “personal news editor in your pocket” to guide journalists, citizen reporters, activists and other users through the newsgathering process. 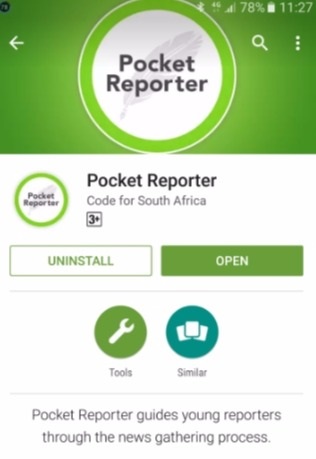 Once downloaded, reporters in the field do not need an internet connection to use the app, which takes them through a series of questions that ensure they gather the correct information for their story.

The app hosts a variety of story templates, each with questions tailored to different topics, ranging from accidents, fires, crimes and disasters to obituaries and protests. Users can enter information in response to each question, as the app guides them through the reporting process.

Users then have the option of emailing the information to themselves so they can work on their story back in the office, or sending it directly to their news editor if they’re on a tight deadline.

Pocket Reporter is based on Virtual Reporter, an online website originally developed 20 years ago by former Cape Times managing editor Kanthan Pillay after he spent some time at the Harvard Business School and the Nieman Foundation in the United States.

“At Nieman, we were introduced to the ‘Reporter’s Checkbook and Notebook’ by Melvin Mencher, and it got me thinking about what we could do with it in South Africa,” says Pillay. “I believed then that the next generation of reporters would not carry notebooks, but would work online.”

Pillay worked with former Cape Times news editor Colin Howell to customize the checklist found in Mencher’s book so that it would be more relevant to local reporters in South Africa, resulting in the launch of the Virtual Reporter online tool.

“I am so happy to see our tool move into the smartphone era, after first being inspired by a book, which in turn inspired our web-based tool,” said Pillay, who now heads a South African radio station. “When I was a young reporter I learned the craft from news editors and sub-editors, but with fewer staff jobs these days this is not always an option for youngsters starting out. This tool helps teach the basics of reporting – and it’s free.”

Louise Vale, the head of AIP (which helped launch the app), described Pocket Reporter as a “fantastic tool for small newsrooms." 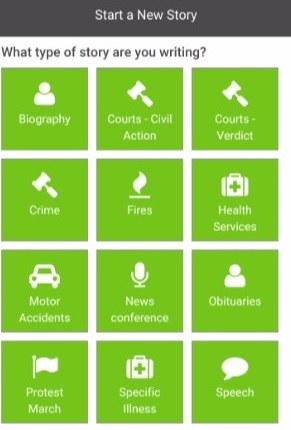 “It will fill an important gap in under-resourced newsrooms, especially those in rural areas,” she added.

The questions on Pocket Reporter are designed to gather the fundamental information required when writing any story, and can be used to gather information in any country. The only South Africa-specific section is court reporting, as court systems differ in different countries.

Pocket Reporter is free and open source. The app was built for Code4SA by coder Lion Summerbell, while the UX (user experience) was done by Peter Koen of Pondo.

To download Pocket Reporter, go to Google Play Store on your mobile device or tablet, search for Pocket Reporter by Code for South Africa and click install. You do not need to register to use the tool.

Raymond Joseph is a veteran of South African newsrooms. Learn more about his work as an ICFJ Knight Fellow here.