The challenge of doing journalism in Nicaragua's authoritarian context

In Nicaragua, where independent journalists live under constant censorship and threat, and in fear of being attacked at any moment, one thing persists: their commitment to telling the truth.

Since April 2018, when civilians took to the streets in protest of the authoritarian regime of Daniel Ortega and Rosario Murillo, at least 120 journalists have had to seek refuge in other countries due to exile, according to the Independent Journalists and Communicators of Nicaragua (PCIN).

But even from outside the country, Nicaraguan journalists have stood out for developing tools and support networks that allow them to continue documenting the news.

Recently, IJNet and CONNECTAS organized an event titled "The Resistance of Journalism in Nicaragua." The event was moderated by Carlos Eduardo Huertas, director of CONNECTAS, who led a conversation about the experience of journalists who continue to report on the abuses of power in the country.

Nicaraguan journalists Jennifer Ortiz, founder and director of Nicaragua Investiga, and Octavio Enríquez, investigative journalist at Confidencial, shared their experiences working both from the battlefield and from exile. Santiago Sánchez, editor of IJNet's Spanish site, joined to share details about IJNet's new toolkit for reporting in closed and authoritarian contexts.

During the event, Ortiz said that the capacity for resilience and the hope of contributing to a better future is what drives journalists to continue doing their job, especially in the wake of recent attacks on La Prensa, whose journalists were forced to flee the country through blind spots at the borders and leave their jobs due to government persecution.

“It gives me great satisfaction to do what I do because I know that it is a profession that helps build society — that also helps you transform thoughts that perhaps will get us out of this eternal cycle, of this constant repetition of history, of this story of warlords and dictators,” said Ortiz.

Despite media persecution and the challenges of working from exile, Enríquez asserts that it is vital to continue documenting and reporting safely and responsibly.

"It’s not easy. We have all gone through those episodes of depression, sadness, but there is a conviction, and there is a desire to change the things that move us,” said Enríquez.

When telling stories, Ortiz and Enríquez emphasized the importance of journalists not only ensuring their safety and that of their relatives, but also that of their sources. By doing this, they can build networks of trust and collaboration.

“Sometimes they congratulate us, but the truth is that without people that still dare to speak, we couldn't continue telling stories. And we have to do everything, absolutely everything in our power to protect them in the first place,” said Ortiz.

Some practices they have adopted is working with anonymous sources and not signing certain notes to minimize retaliation. Sánchez added that although independent journalism in Nicaragua illustrates how to counteract censorship, it is not the only case. Journalists in Russia, Venezuela and Cuba have also had to resort to similar methods.

In the case of Nicaragua, disinformation comes from the government itself through the almost monopolistic management of the media and the use of trolls and false social media profiles to harass journalists. Just in 2021, Meta eliminated more than 900 accounts linked to the Ortega-Murillo regime.

Tackling the issue and working from exile, media such as Divergentes offer fact-checking services with platforms such as TikTok to reach and inform a larger and more diversified audience.

Ortiz mentioned that as time passes, independent media outlets have been cultivating their credibility, so that the civilian population has begun to realize the falsehoods and manipulation of government data on their own.

Enríquez added that to protect his sources and prevent false accusations, the verification and contrast process of news must be taken with caution. Corroborating data should not be based on one source.

"In order to get to the publication of a note, we go beyond putting on screen what they told us," said Enríquez.

Ortiz mentioned it is difficult to escape the eyes of government institutions as even managing identity documents, such as a driver's license, can raise alerts and provide the government with personal information.

To address the challenge, many journalists in Nicaragua have adopted protective actions that mean living like a criminal: changing addresses frequently, making phone calls only through Telegram or Signal, and even fleeing the country, among other strategies.

"We are not criminals, so we do not have the mentality to be hiding ourselves all the time, but we know we are in an almost-war context, and we have to protect ourselves," said Ortiz.

Regarding forms of digital espionage, the IJNet toolkit includes taking measures such as turning off mobile devices, installing antivirus software and ways to share documents securely.

Enríquez said he believes that continuing to practice journalism from outside or within the country is a difficult decision that journalists must make individually. He affirms that the decision of who says to continue exercising his career is as valid as who decides to stop.

Despite having to go into exile in 2021 for fear of being imprisoned, Enríquez believes in the importance of continuing to report and leaving a historical record for the future.

“My personal opinion is that an imprisoned journalist is of no use to anyone. And our role in society is to denounce and monitor power,” he said.

The complicity between journalists allows them to continue with their work. Through collaborations, Nicaraguan journalists have a greater reach in civil society and protect each other when exposing facts.

“We have stripped ourselves of that journalistic ego. There is no need for us as journalists to say 'I was the first to tell this story,'" said Ortiz.

Although the impact of their stories is difficult to measure based on the number of clicks and reproductions, they trust that what gives value to their work is the ability to replicate and magnify voices both inside and outside the country, said Ortiz.

“The only thing I can say is that I believe journalism can change things. It is something that moves one to move forward despite adversity,” he said.

Image by David Peterson from Pixabay. 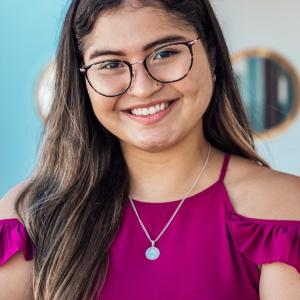 Aurora Martínez is currently the communications intern at ICFJ. She is originally from Nicaragua and is a third-year student of journalism at the University of Florida.