In Brazil, 1 in 4 internet users regularly get news on WhatsApp

One in four internet users in Brazil use WhatsApp in their weekly news digest, although almost of them admit they distrust the content they access through the app most of the time, according to a new survey sponsored by ICFJ under the TruthBuzz program.

Messaging apps, especially WhatsApp, have been in the middle of the public debate in Brazilian politics, due to their role as one of the main vectors of political discussion and disinformation during the general elections in 2018. 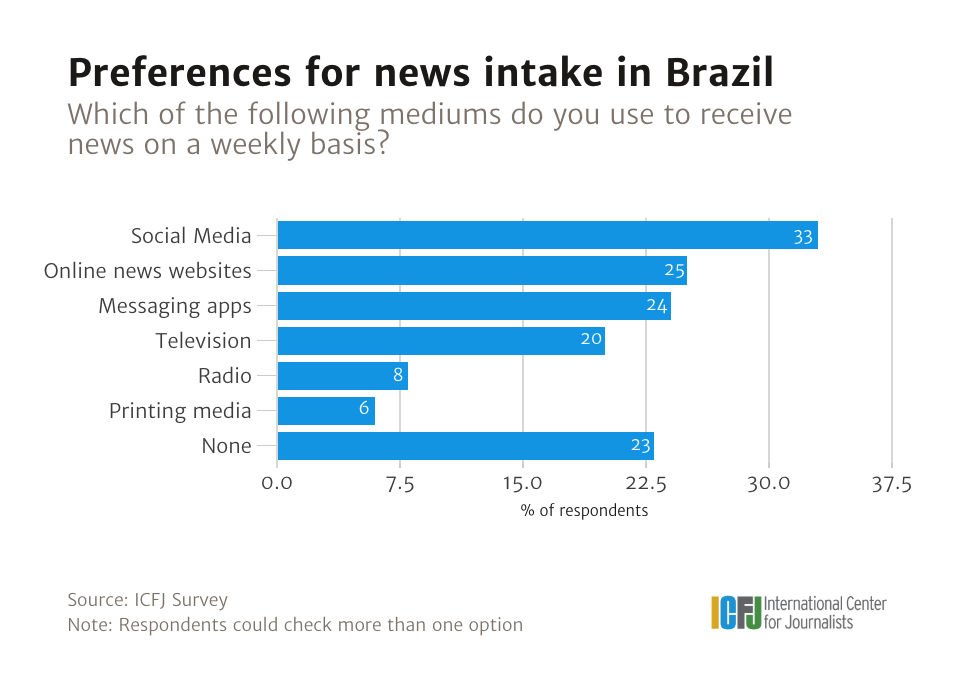 The ICFJ-sponsored research included 6,030 initial respondents living in Brazil, from all genders and above 18 years-old, from which 24 percent (around 1,450 people) said they use “WhatsApp and messaging apps” as their preferred method to get  news on a weekly basis.

This compares with 25 percent from news websites and 33 percent from social media, which was the most common resource for receiving news. The margin of error is 1 percentage point, and respondents could choose more than one answer.

About 23 percent of respondents said they did not use any of the survey options. 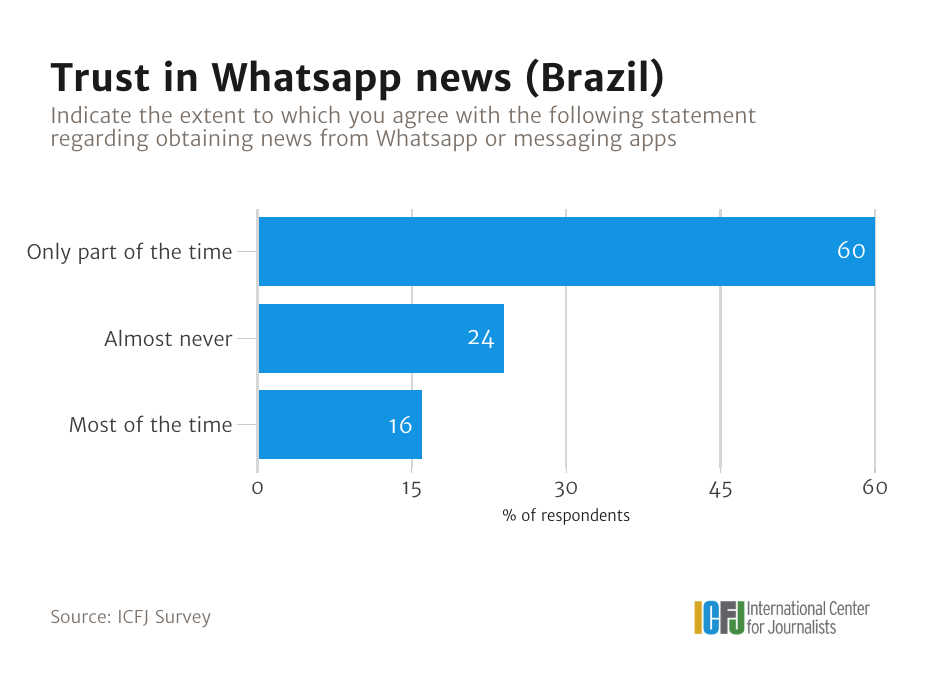 To explore the way people interact with adversary political information in messaging apps, the survey asked respondents how often he or she saw political news with which they disagreed with in the last 30 days.

Thirty-six percent reported seeing this kind of content more than once per day on messaging apps, such as WhatsApp, while 16 percent said they see it less than once a week. 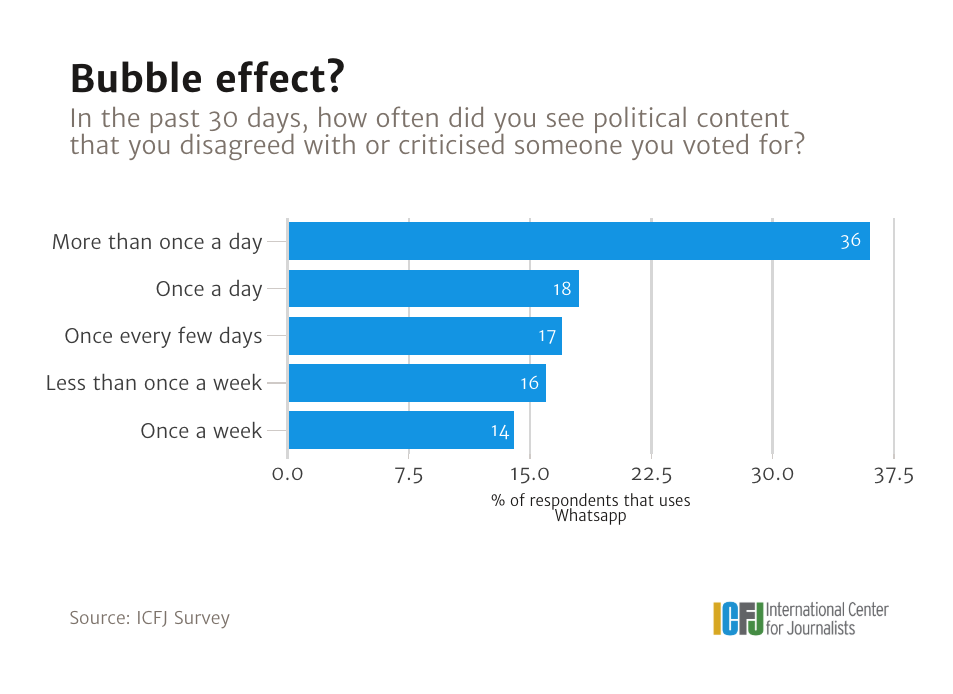 Considering general messaging — not only news — the survey found that that images are the most common media shared through WhatsApp and other messaging apps, with 53 percent of respondents selecting "images and memes" as the most common non-text content to share on messaging platforms.

Videos are the second most common, with 42 percent, along with audio and voice messages (35 percent). External links and GIFs gathered 25 percent and 23 percent, respectively. Simple text exchanges were not considered in the questionnaire, and respondents could choose more than one option. 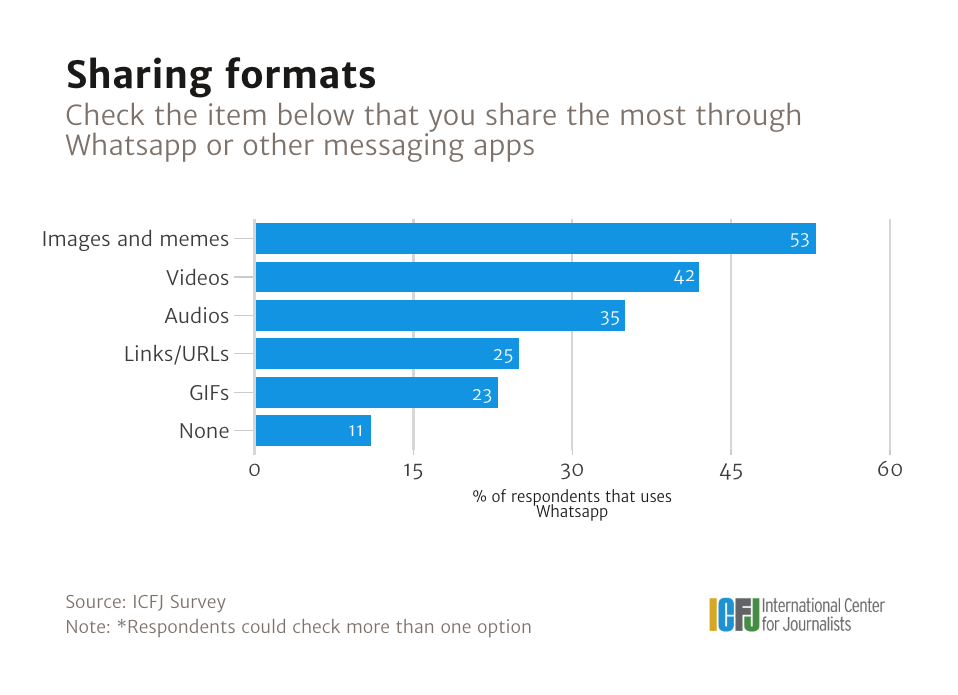 This survey provided preliminary research for understanding user behavior on WhatsApp and other messaging apps. Before combatting problems such as disinformation that spreads on these platforms, more study is required.