Local newsrooms across Nigeria are joining together to tackle fake news in the country. Africa Check — Africa’s first independent fact-checking organization — is training journalists and providing them with skills, exposure, tools and resources to debunk false claims and statements made by public officials.

Beginning in March 2019, with support from the U.S. Embassy in Nigeria, the organization held training workshops across the six geo-political zones in the country. The trainings were aimed at engaging more than 200 journalists from different newsrooms on fact-checking methodologies, preparing them to be the next generation of fact-checking champions in the country.

“Part of our goal at Africa Check is to foster fact-checking skills among the public, particularly [young people], and to foster a community of non-partisan fact-checkers across the continent,” David Ajikobi, Nigerian editor of Africa Check says. “The outcomes we look forward to include ensuring media organizations in the country have in-house fact-checking skills to fact-check claims for themselves, and ensuring that citizens can easily identify false claims and access accurate information.”

The trainings are helping journalists in local newsrooms and offering tools and inspiration for them to start fact-checking desks and initiate a culture of verification in their newsrooms.

“I have spoken to my editor about organizing a step-down training for my colleagues on fact-checking,” Daniel Ezeigwe, a reporter at Anambra Broadcasting Service, says. “This will help them to know what fact-checking is all about, and the process it takes.” 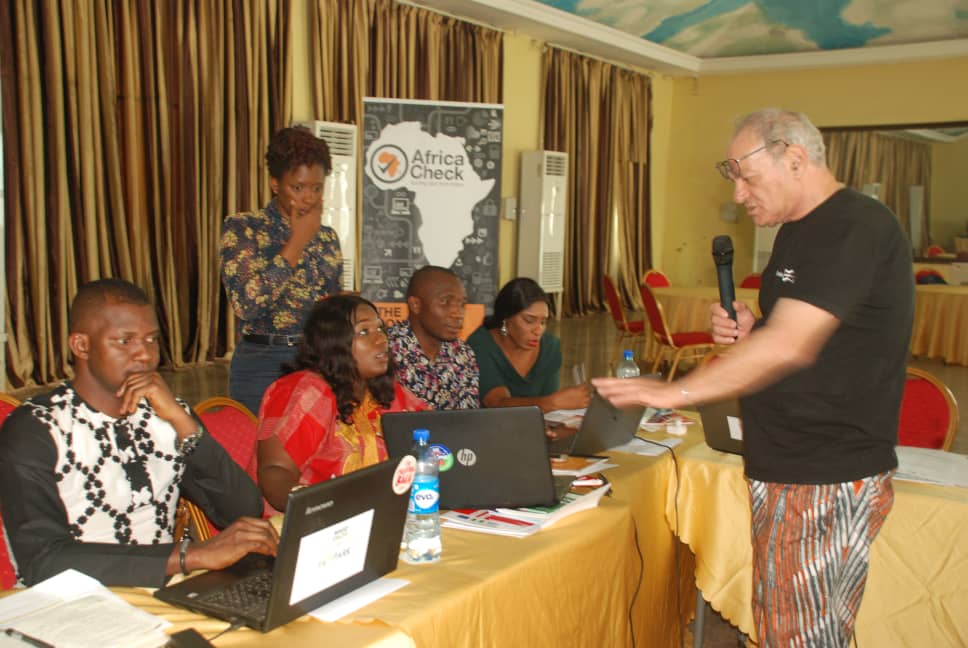 Participants were trained to use tools like Google’s reverse image search and a similar tool called TinEye, as well as  using specific fact-checking methodologies, in order to verify the authenticity of videos, pictures and texts that are in the public domain. Trainees were also taught to use Foller.me, another fact-checking tool that can be used to verify Twitter accounts and profiles.

Ajikobi was satisfied with the number of journalists from different newsrooms that were trained during the program, and was happy that some of them even returned to their newsrooms to train their colleagues.

“Just recently, we did a one-day training for 190 journalists at once in Lagos, which was sponsored by Google Nigeria. Almost all of them did not know how to do a reverse image search on their phones,” he says. “Based on the feedback we’ve gotten so far, we can say the training helps journalists do their work better in an era where disinformation is targeted at everyone — even the journalists.”

The organization is extending the training to journalism students across Nigerian universities, including the University of Lagos and Elizade University. Every week, through fact-checking radio programs, the organization also reaches citizens with fact-checks and debunks of circulating stories. They also include tips for verifying information and media literacy.

Through the trainings, Ajikobi says journalists have been given the tools and capacity to implement the practice of fact-checking in their own newsrooms.

However, Ajikobi says many people have the wrong perception of fact-checking and the organizations championing it.

“Many wrongly view fact-checking as an attack on people or organizations,” he says. “We do non-partisan fact-checking with the aim of promoting accuracy in public debate and the media. Fact-checkers focus on fact and accuracy and not personality, politics, ethnicity or religion.”

“We believe local newsrooms can implement fact-checking as an essential part of the news production process,” he adds, remaining hopeful about the future of fact-checking in the country. “We hope to see the fact-checking practice institutionalized in newsrooms.”

Images courtesy of Patrick Egwu at an Africa Check training in Nigeria.