It just makes sense that news outlets and libraries collaborate. That’s something we at the News Co/Lab have believed from the beginning, and it’s something we’ve seen work very well in our partnerships with The Kansas City Star and The Telegraph in Macon, Georgia. We are always glad to see other examples of these two important institutions collaborating to bring people news and information that impacts their community. (And clearly we’re in good company, as evidenced by Nieman Reports’ feature about why these collaborations are so important.)

Read on for six insightful journalism-library partnerships — ranging from high school programs to pop-up newsrooms — to inspire newsrooms of all sizes.

The Dallas Morning News and the Dallas Public Library

Dallas high school students tackle serious stories — and become smarter media consumers— as part of Storytellers Without Borders. Students meet once a week for eight weeks, working closely alongside veteran journalists, librarians and city leaders to develop community-focused articles. “The goal of their joint program is to turn high school students from across Dallas into budding community journalists, while also helping them realize the importance of local news organizations and libraries at the same time,” Melody Kramer wrote for Poynter in 2017.

Journalist Madeleine Bair launched El Tímpano (“the eardrum”) to “create empowering, two-way channels of information” for Oakland’s Latino immigrants. Bair set up shop at farmer’s markets, street corners and — you guessed it — libraries with an oversized, gold community microphone. The result: She interviewed more than 100 residents about the cost of housing. For the full story, head over to Lenfest’s case study on El Tímpano.

1/ After a year of listening & building community relationships to understand what Oakland’s Latino immigrants want in local news, I’m proud to share the first stories that we gathered as part of #ElTímpano’s prototype launch.

In the “What’s Your KC Q?” project, reporters and librarians answer reader questions — submitted through engagement journalism tool Hearken — while showing their work. The goal? Teach community members how to locate and access information using library resources, while also highlighting how reporters uncover information through public records, interviews and other journalistic methods. It infuses transparency and engagement into an impactful collaboration. 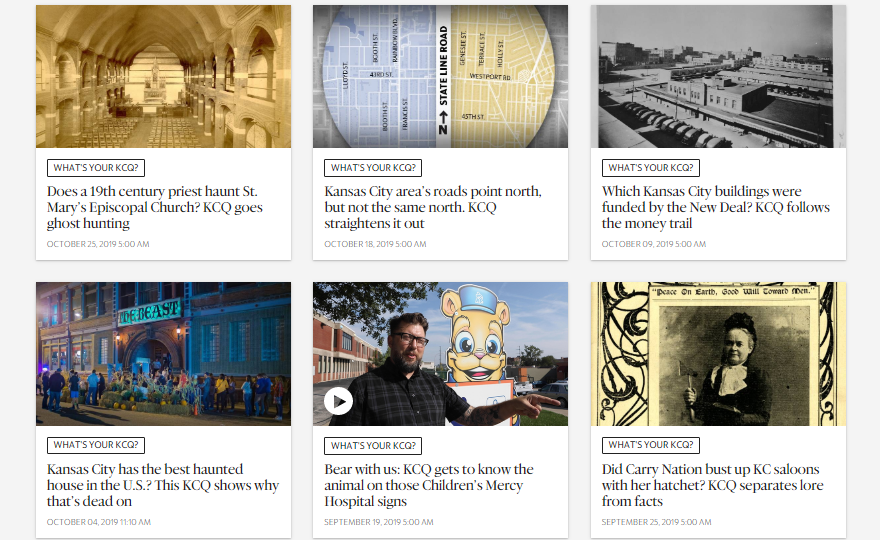 NOWCastSA is public television for the people. The online-only outlet covers hyperlocal news directly from the San Antonio Central Library’s sixth floor. Executive Director Charlotte-Anne Lucas oversees a modest staff including both high school and college interns, who learn journalism basics and the importance of connecting with the community. The two organizations also work together on programming, too, like news literacy workshops. Lucas says the two organizations are deeply connected. “Obviously the address and place give us credibility, but it’s really helped us connect with the community,” she says. “It’s a comfortable space and a safe space where people feel free to ask questions and explore ideas. If you think of journalism as a fundamental thing — the process of verification — it seems like this is a sensible place to be.”

The Sprawl and Calgary Public Library

Calgary’s The Sprawl calls itself “pop-up journalism.” It’s only natural the crowdfunded outlet should have a pop-up newsroom, too. For its seventh edition, The Sprawl opened a two-month newsroom it the city’s new Central Library. “How can we take the concept of a newsroom and bust it open?” founder Jeremy Klaszus asked when he introduced the project. “What if we let Calgarians into that discussion? What might we learn?” The staff hoped it would spur civic engagement and important dialogue. Here’s what they learned from the experiment (plus a fantastic comic about the students’ experiences!)

Quick recap of our pop up newsroom collab with @calgarylibrary:

The Telegraph in Macon, Georgia, joined forces with CCJ and the Center for News Literacy (CNL) at Stony Brook University, to bring an 8-hour train-the-trainer news literacy workshop to MGPL librarians. Participants learned about verification, balance and bias, identifying journalist opinion and evaluating sources. Then, librarians created lesson plans for their patrons based on CNL concepts like V.I.A. (verification, independence and accountability) and “information neighborhoods.”

Have an interesting newsroom-library partnership to share? Send us a note at info@newscollab.org.

This article was originally published by the News Co/Lab at Arizona State University's Walter Cronkite School of Journalism and Mass Communication. It was republished on IJNet with permission.