2019 reporting highlights from around the world

As 2019 comes to a close, our team of editors and translators around the world shares some of the year’s reporting highlights.

From in-depth investigations that shine light on dark corners of society, to silly videos that appeal to a younger audience of news readers, this year’s list is as diverse in format as it is in geography.

The stories below are listed in different languages to provide regional insight. However, our descriptions are all in English.

In this series, The Intercept Brasil uncovered the leaked conversations in the Telegram app about the Operation Car Wash, the anti-corruption task force that resulted in the arrest of former President Luiz Inácio Lula da Silva.

Also known as #VazaJato (Jet Leaks), the investigation, led by American journalist Glenn Greenwald, confirmed suspicions about the politicized motives and unethical behavior of Brazil’s prosecutors, and raised discussions about the use of anonymous sources, hostility against the press and political polarization.

Fires in the Amazon rainforest grabbed the world’s attention in 2019, and the timely, specialized coverage of InfoAmazonia stood out. In this report, journalist Gustavo Faleiros — a former ICFJ Knight Fellow — showed a direct relationship between increased fires and the spread of deforestation. His report was based on data from NASA and Brazil’s National Institute for Space Research (INPE in Portuguese).

This is the ninth edition of a special reporting initiative from Agência Pública, in partnership with Oxfam Brasil. The report focuses on the return of hunger in Brazil after the government cut down social programs.

In the midst of an economic crisis, this edition featured a seven-part series presenting the faces of hunger in different parts of the country. The stories cover the impact on the judiciary system, family struggles, malnutrition, food insecurity and more. 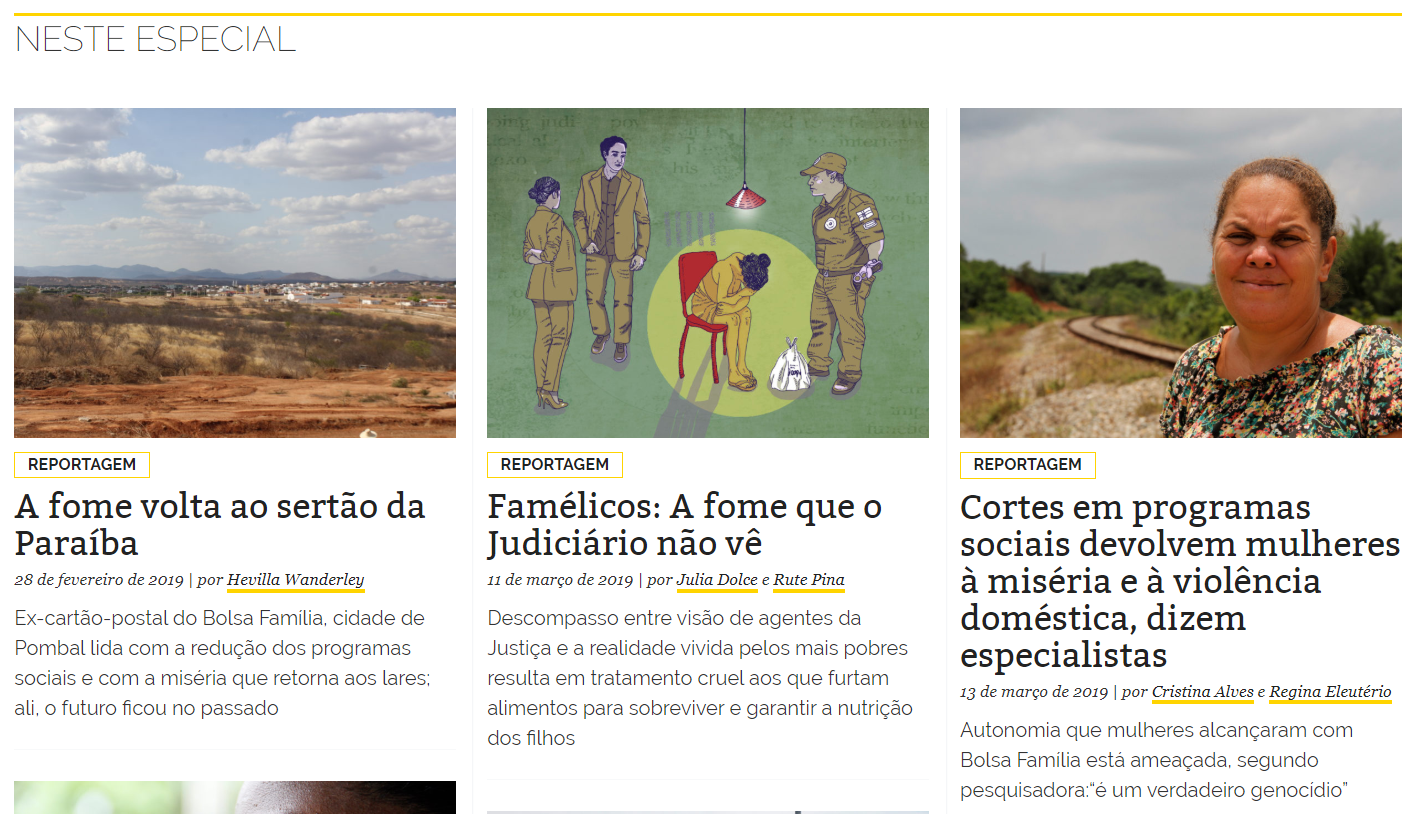 This story from Periodismo de Barrio in Cuba won a Premio Gabo this year. The report focuses on lead poisoning in a neighborhood in Havana for more than sixty years. The families that used to live there are safe now, but will suffer the consequences of poisoning for the rest of their lives. At the same time, other people continue to live in the neighborhood.

Designed to imitate sex trafficking website ZonaDivas, this collaborative multimedia story explores the origin of the site, as well as the the sex trafficking industry in Venezuela and Mexico. It tells the story of six women involved with ZonaDivas, and later killed.

This is the story of the first trans child to officially transition in Argentina. The deeply moving episode, produced by Latin American podcast Radio Ambulante, not only effectively explores gender identity, but also provides an example of how to make well-reported audio story.

The most outstanding journalistic project of this year was Ivan Golunov's investigation into Moscow's funeral mafia. It is notable not only for the investigation, but also its aftermath: "Russian investigative journalist Ivan Golunov was arrested in June on fabricated drug charges and released days later following an unprecedented public outcry. The court dropped all charges against him,” The Moscow Times reported. After this story, Meduza started a new project "Resistance against police malfeasance" to keep police accountable. 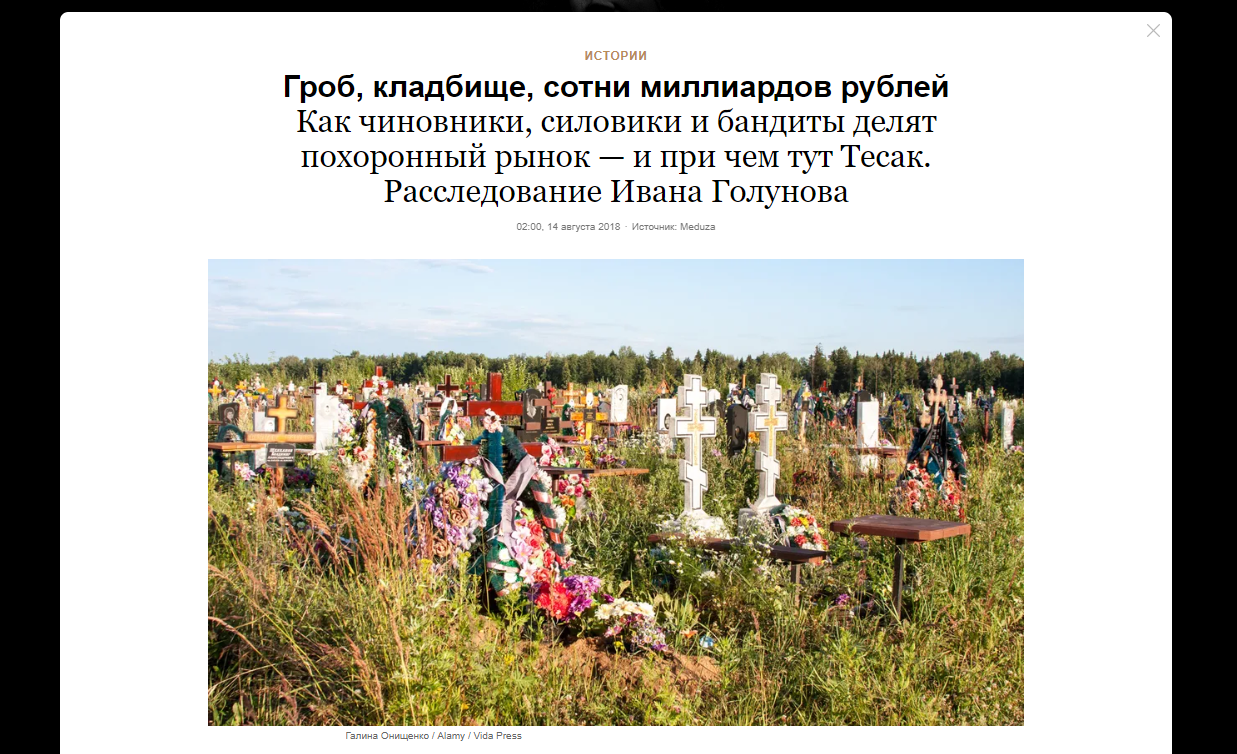 This article, published by BBC Russian, explores Russia's stolen data industry. The reporter, Andrey Zakharov, bought his own phone and bank information in order to better understand how the illegal industry operates.

Kolyma - Birthplace of our fear

Russian YouTuber Yury Dud created this documentary about life in the land of gulag labor camps. It was viewed more than 9.5 million times in just seven days, according to a report by The Moscow Times. One of the goals of the documentary was to tell the younger generations of Russians about this terrible period in Russian history.

Collaborative investigation on corruption in Kyrgyzstan

RFE/RL's Kyrgyz Service Radio Azattyk, OCCRP and Kloop collaborated on a large-scale investigation into corruption in Kyrgyzstan, which is explained in this English article from OCCRP about the investigation. There were several protests following the publication, and unfortunately, the main source was killed.

Originally launched as a nearly 100-page spread in The New York Times Magazine, the project explores aspects of American life that can be traced back to slavery, which began in the U.S. in 1619. The project includes photo essays, reported stories, historical essays and a podcast.

This investigation takes an in-depth look at the lives of Facebook moderators, who encounter graphic content on a regular basis, affecting their own mental health. Through interviews with current and past moderators, reporter Casey Newton sheds light on an industry shrouded in secrecy.

TikTok is a social media app quickly gaining popularity, especially with a young audience. The Washington Post joined the platform and regularly posts cringe-worthy videos that mimic the style of the platform. Their goal is to establish brand awareness, and attract a younger audience.

Share with us some of the most impactful stories you have seen this year by tweeting at us @IJNet.

This round-up was written and produced by IJNet's team of editors and translators.