An international initiative meant to promote safety for freelance journalists plans to expand its reach with a new website and an ongoing campaign to get editors and writers speaking frankly about staying safe.

A Culture of Safety (ACOS) Alliance launched its website in early June, where freelancers can find resources such as a compilation of global organizations that offer training and support, as well as a suggested checklist for what editors and freelancers should review before dangerous assignments.

The ACOS initiative is meant to push freelancers and news organizations towards adopting better safety standards when reporting in high-risk areas. The Alliance is made up of a mix of international news organizations, including Reuters, the BBC and CNN, that have endorsed a set of safety principles (also available in Spanish, Arabic, Russian and Persian).

“Across the board, what we’re hearing from freelancers is that this is making an impact,” said Emma Beals, a freelance journalist who is an executive team member of ACOS. “I’ve had freelancers say to me, this news organization has just asked me to dispense all responsibility for my well-being on this contract. So then you can point them to ACOS and say, well, there’s this movement within the industry to move toward being more responsible.”

The ACOS coalition was galvanized in part because of the 2014 deaths of freelance journalists Steven Sotloff and James Foley in Syria, which Beals described as a “wake-up call across the industry.”

“Top editors at very large news organizations were deeply shaken by the murders of James and Steven, and so when we came up with the idea of the safety principles, those editors were receptive,” said David Rohde, an investigative journalist for Reuters who helped build up the ACOS coalition. “For news organizations, these tragedies are heart-wrenching on a personal level but are increasingly common. Almost every major news organization has had someone in prison, someone kidnapped or someone killed in the last decade.” 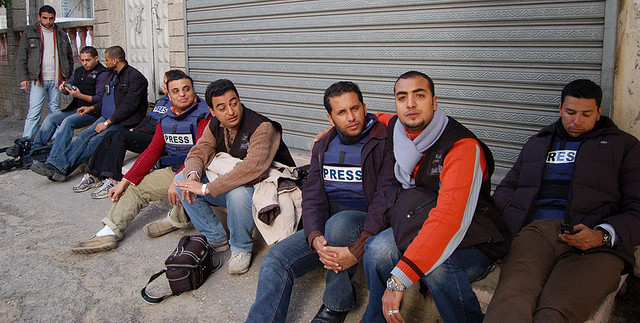 The aim behind the ACOS principles is to set basic safety standards that both news organizations and freelancers are committed to following, Rohde said. While it may be tough for some freelancers to insist that editors cover the additional costs of dangerous assignments, ACOS is meant to raise awareness that both sides must have that discussion.

“I think some freelancers are afraid of raising those difficult questions because they’re worried it would mean they don’t get assignments,” Rohde said. “But I’ve talked to editors who say they’re impressed when freelancers raise those questions. Editors are looking for seasoned journalists with good judgment who will take smart risks for big stories, not reckless risks for small stories.”

In addition to compiling resources on safety for freelance journalists, ACOS is also working on creating an insurance pool for freelancers. While many international freelancers will likely purchase a standard medical plan for reporting trips, fewer have the resources to buy equipment or kidnapping insurance. According to a survey carried out by ACOS, the second most important concern cited by freelancers, after bad pay, is lack of affordable insurance plans.

The initiative hopes to expand by convincing more news organizations in high-risk areas for journalism — including countries like Mexico, Pakistan and Kenya — to commit to the safety standards laid out in the ACOS principals. Additionally, as international newsrooms frequently rely heavily on locals to help report dangerous stories, the initiative emphasizes that safer journalism also includes protecting those locals who may face greater threats.

“If we can have international freelancers thinking more specifically about their practices, they’ll be making sure their fixer, driver and local colleague are being treated fairly,” said Beals. “They’ll be pushing harder for the rates and the rights for those people, because they’ll feel more empowered to have that conversation for themselves.”

Explore more of the ACOS Alliance’s resources for freelance journalism safety here, or download their checklist on safety preparation here.