4 revealing takeaways from the GEN Summit 2017

Over three days, delegates heard from a number of distinguished speakers on topics related to disruption, innovation and cooperation.

Here are the key findings from four of the sessions which most caught my attention.

1. Inside The Washington Post’s digital evolution

Not surprisingly, it was standing room only for Martin “Marty” Baron, executive editor at The Washington Post, when he delivered his keynote at the start of the second day.

Since the paper was acquired by Amazon founder Jeff Bezos in October 2013, “our goals at The Post have been the following,” Baron outlined: “Make rapid digital progress, that's number one. And number two, deliver ambitious journalism.”

“We don't accept the idea that we can't do both at the same time,” he added. “We can be smart while also having popular appeal.”

On the content front, this has meant embracing aggregation, video, news alerts, newsletters and launching “new blogs covering specialized areas like the environment, science, military affairs, the culture of the internet, parenting, spiritual life ... and other subjects.”

This has been underpinned by efforts to improve the speed of their website, the creation of a custom-built publishing system (Arc, which is licensed to other publishers, and experimentation with mediums such as “Snapchat, Amazon Echo [and] podcast”).

Meanwhile, new working patterns mean “there will be no hour of the day or night that goes unstaffed,” whilst new workflows mandated “that every department published earlier in the day when internet readership was at its highest.”

Baron’s speech was an interesting counterpoint to the perspective from Ben Smith, editor-in-chief at BuzzFeed.

“BuzzFeed News comes out of a slightly different tradition than The Washington Post, to put it mildly,” Smith acknowledged. “We were born out of a web culture.”

BuzzFeed in 2017, Smith reminded attendees, is more than just a producer of cat memes and Game of Thrones listicles. The site employs 250 journalists around the world, and it has a strong track record in tackling fake news head-on, as well as producing important award-winning journalism.

Nonetheless, he admitted, this wasn’t always the case.

“It would have been a weird question in 2012 to say, do you trust BuzzFeed?” Smith said.

One way BuzzFeed has sought to address this is by beefing up its news provision.

BuzzFeed News initially aimed to “get scoops and break news about American presidential politics … but certainly in the United States, it's not really a place where you win trust, because the waters are so poisoned.”

Instead, the site has invested in “investigating student loans, educational institutions, sexual abuse on campus, things that touch our readers and touch real people.” It’s an approach that BuzzFeed has sought to model as it has expanded into new international markets.

3. The next chapter of the mobile revolution

Nic Newman, who explored findings from the latest Digital News report, published by the Reuters Institute for the Study of Journalism, touched on a plethora of topics, including trust in media, social news and the impact of political polarization.

But tucked away in his talk was the idea that, with take-up leveling off, “we're kind of coming to the end of the first phase of the mobile revolution.”

“Most people who are ever going to use a smartphone for news are already [doing so] in the developed world,” Newman said. “But I think the intensity with which we're using these devices and our dependence on them that's what continues to grow.”

As news relationships with mobile devices deepen, this is leading to an increased emphasis (and usage) of mobile alerts as publisher’s target notifications on the locked screen, and in some markets a resurgence of news apps like Apple News, as well as migration for news sharing and discussion to closed messaging platforms like WhatsApp.

How the digital future will unfold, no one quite knows. As Amy Webb, founder of the Future Today Institute, reminded us: “Technology never, ever develops along a linear track.” However, she urged attendees to start to thinking immediately about some platforms which promise to radically change the world around us. 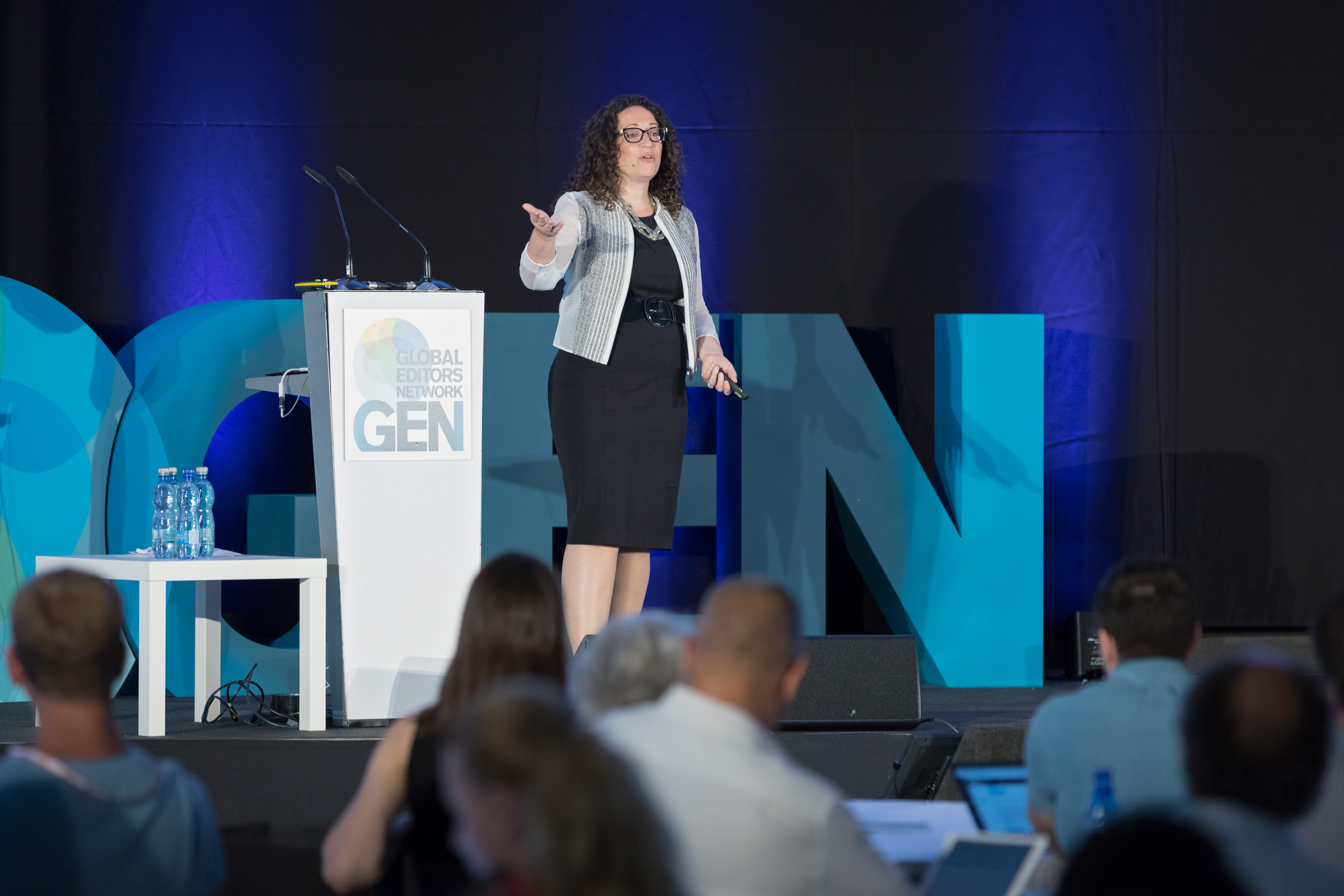 Webb animatedly argued the case for Augmented Reality and visual object recognition – highlighting the extensive work being done by Apple, Snap, Google and Facebook in this space –  as well as the game-changing importance of Artificial Intelligence.

These technologies are going to reshape our world, she suggested, but newsrooms and media companies are barely engaging with them.

“The future of news involves object recognition and Augmented Reality,” Webb said, “but there isn't a single news organization that I know of on the planet that's working on a visual object recognition strategy for revenue advertising or for content.”

Instead, Webb noted the enthusiasm with which many newsrooms are embracing virtual reality.

“You're following the wrong fish,” she told the room. “I've seen some really tremendous virtual reality projects, and I think that for some things virtual reality is a great way to tell stories, but this is not what you should be following.”

In a similar vein, she stressed that attendees cannot afford to “be a bystander to AI.”

“It's fine to keep learning, but we have to start doing. So, don't wait. You need to start now to develop a strategic plan and to find industry collaborators, true partners not people who are just using your content, so that they can advance what they're doing.”