At its debut nearly seven years ago, Quartz’s model was to be everywhere— not behind a paywall, not locked inside a mobile app, ready to build an audience through social sharing.

“In 2012, the very clear strategy for us was to create as little friction as possible to growth, because you start with an audience of zero. We did not want to create any barrier to either discovering or sharing our content,” Quartz publisher Jay Laufsaid in a talk here at the Nieman Foundation in 2016. “So whether it was a paywall or an app that you had to go download and that we hoped you would open, all of those things were barriers to introducing a brand-new media property to a new audience.”

Having no paywall was “part of the original equation: mobile-first and free, embracing the open web,” he told Frederic Filloux. And it worked: Less than a year after launching, it was able to brag about passing The Economist in U.S. audience. Launched with about 20 staffers, it can now claim a newsroom of more than 100.

But times change — and audiences change. In a move that got little attention last week, the much-lauded global business news site announced that for the first time it would be putting all its articles behind a metered paywall. Read more than 10 or so and you’ll get a pitch for the Quartz Membership, which runs $100 a year or $15 a month.

“I think we’re opening the entry point to [membership] through the metered wall,” Lauf told me. “It will help us strategically introduce membership to even more of the Quartz fanbase organically through this metered wall. It dovetails nicely with what membership is.”

As Lauf put it to readers:

In a world often filled with noise over news, we believe our mission is more important than ever. Today we are asking those of you who value this mission help us continue to invest in what you’ve come to love about Quartz. And so today we are making unlimited access to all original reporting by Quartz’s journalists around the world exclusive to members. We’re adding a limit to the number of free articles that non-members can access each month. Quartz email newsletters and apps remain free.

One of the site’s key differentiators at launch was its bespoke advertising platform, with large custom ad units sold to high-end brands like Prada, Credit Suisse, and Infiniti. Quartz has had a lot of success with that approach; along with that 100-plus newsroom, it has nearly 40 staffers in product and more than 60 on the business side.

But broader trends in the ad market pushed it to start also running programmatic advertising a year ago. And like other sites, it’s come to believe reader revenue will need to play a larger part.

The move comes amid some tough traffic numbers for Quartz, according to comScore data. In 2017 and 2018, Quartz’s web traffic averaged right around 11.5 million monthly unique visitors, with a peak in August 2017 of 15.7 million. For the first three months of 2019, though, that dropped to 7.3 million, a 35 percent decline over the same period a year earlier.

Of course, Quartz reaches people on lots of platforms other than its website, like those aforementioned newsletters and apps. But it had only one month with fewer than 10 million uniques between October 2016 and July 2018; in the eight months since then, it’s been below 10 million every month but one.

July 2018 was when Quartz was bought by Japanese business media company Uzabase from Atlantic Media for $86 million. According to a Uzabase presentation to investors, Quartz’s revenue grew from $18.6 million in 2015 to $30 million in 2016, but then decreased to $27.6 million in 2017.

The membership program debuted last November, but it was initially positioned as providing new and additional content to members, not putting Quartz’s main output behind a paywall. (Some articles will continue to be members-only, no matter the number on your article meter.)

The number of free Quartz articles you’ll get varies based on what the site perceives to be your likelihood of becoming a member, among other factors. The Wall Street Journal, the Financial Times, Schibsted, and New York Media each also have paywalls that adjust to target those most likely to convert. (It took me nine articles to hit Quartz’s paywall; a couple friends in different industries and cities had to click between seven and 14 times.) 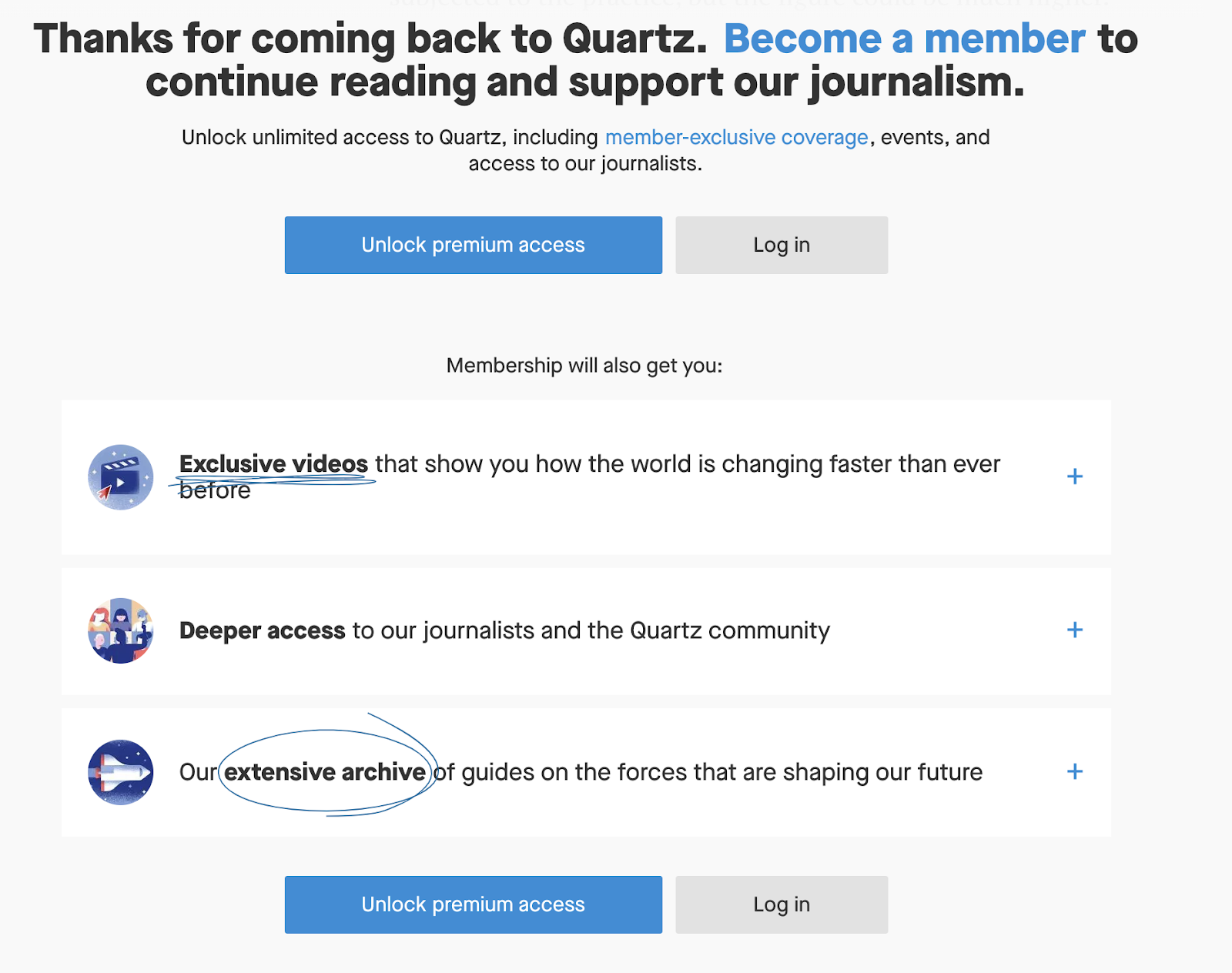 Membership does still get you more than an unlocked paywall. (Lauf lauded the progress membership has made since its November launch — but declined to share any specific numbers.) Members also get multiformat field guides on things like the cannabis industry, battery technology, and life after cash, which then drive weekly conference calls with reporters; members also get videos of interviews with big business leadership (like Google’s Eric Schmidt, Microsoft’s Bill Gates, and IBM’s Ginni Rometty) and in-person events, though those have only been in New York City so far. (Lauf said they plan to expand to Silicon Valley, London, India, and Hong Kong soon.)

“Access to member-exclusive content, which gets closer to an education on how to navigate the global economy, is a core proposition,” he said.

Reader revenue was never a forbidden idea at Quartz; even at its launch, executives told our Ken Doctor that “Politico Pro-like paid products” would be tested “some time in 2013” and that “reader revenue, in some form, will be key in the long term.” Lauf has been talking about the need to get beyond advertising for some time, and paid products were also on the table before Uzabase bought Quartz last summer. But its new owner has its own history with paid products. NewsPicks, which launched in Japan in 2013, is Uzabase’s $15-per-month business news service. It has more than 60,000 paying subscribers out of its audience of 3.3 million registered users, and close to half of NewsPicks’ revenue comes from subscriptions. Video has also been key to NewsPicks’ signup success, Lauf said.

But, as we’ve written about before, the news industry has a semi-decent handle on how to get many people to pay for their primary news source; the digital subscription successes at The New York Times and The Washington Post make that clear. The evidence is less clear about second reads or other outlets who — whatever their quality — aren’t as central to people’s everyday news habits.

This is in no way a knock on Quartz, which has a ton of high-quality reporting but which is not, to my knowledge, anyone's primary news source.

Some (more mission-driven, less business-professional-targeting) news organizations see membership as an opportunity to avoid restricting access to its journalism. It’s sometimes an opportunity for people to buy into the mission in a way that says they want to keep the content free for others. Of course, membership is also a term that has been used by other news organizations as a synonym for “subscription” in order to make the transaction seem less transactional. Quartz wants to foster a relationship with members topics as well.

“That sense of community is galvanizing next-gen business professionals under the Quartz banner,” Lauf said. They’re known internally as Quartzians, he says, people who are excited for change. “Some are in the c-suite. It tends to be a slightly younger leadership class who are globally minded and tech savvy. They care about a lot of the big issues like the environment. There’s a Quartz tribe, and up until now there hasn’t really been a way to interact with one another.”

That community can be found most directly in its mobile app, which Quartz revamped in November when it launched membership. (It’s based on NewsPicks; Quartz’s old app, with its unique chat-based interface, was renamed Quartz Brief.)

Here was the pitch from Lauf and editor-in-chief Kevin Delaney:

We’ve believed from day one that our readers collectively know more about this new global economy than we do. So we’ve built the platform for you to see the expert views of other business people, and share your own. You’ll be joined by some of the top thinkers and doers in business, including tech investor Kai-Fu Lee, industry veterans Beth Comstock, Arianna Huffington, and Richard Branson, political scientist Ian Bremmer, and World Bank CEO Kristalina Georgieva. In addition to this hand-selected group of Quartz Pros, our editors will also curate the top news and ideas of the moment for you. Consider it your home for intelligent, nuanced conversation with leaders, subject matter experts, and curious minds like yourself.

It’s still free to participate in the app.