Facebook’s Signal and the rise of social, search 'radars' in news sourcing

Back in the day, the savviest journalists used police radio scanners to track beats like city and crime. In 2015, we have upgraded to paid, free, even custom-built “radars” that use search, social or open data to generate insights into a) audience interest and response around news events by category, location, device, etc, b) social traction around topics covered by competitors and c) relevant sources or user-generated content around an event or theme.

Most of these are beginning to inform editorial planning throughout the day, alongside leading wires and publishers’ own analytics. That’s why on the day Facebook launched Signal in the U.S., about a dozen journalists halfway across the world — in a small conference room at Hindustan Times House in New Delhi, to be exact — were attending a workshop on dashboards that can help with newsgathering.

We hadn’t gone through many when one of the group pointed out that most of these tools are supported only by Twitter or Google APIs. Everyone wanted to know why we didn’t have one that helped us mine Facebook.

So, starting with the new kid on the block, here are some of the cool screens the sourcing, assignment or alerts desks in your newsroom should be tinkering with all day.

By now, you may have read about how this is a “tool for journalists who want to source, gather and embed newsworthy content from Facebook and Instagram.” The disclaimer, of course, is that — like the CrowdTangle and Storyful APIs and the new Instagram search that power it  —  Signal’s launch version works best for U.S.-based newsrooms, and it will be a while before Signal becomes useful to publishers east of the Atlantic.

Signal can also help you curate and embed all the content you find around a topic, à la Storify, but the newsgathering dashboard and search function is what puts it on this list. If you want to take it out for a test drive, sign up here. 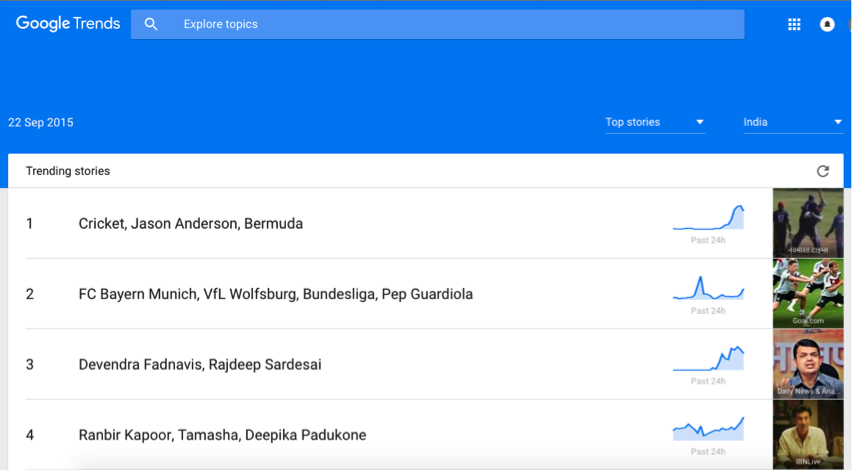 If Facebook and Twitter have a trending stories dashboard, why shouldn’t Google? To be fair, Google Trends has been around for a few years and advertising professionals have found it very useful to compare search interest between brands, campaigns, etc.

But Google repackaged it for journalists this year, and now it also gives you a nifty list of news stories from your country ranked according to the number of people searching for them. It’s still based on user-interest, but derived from search actions instead of social ones that we normally associate “trending” with: likes, comments, shares, etc. Note how the growth graph shows you how distribution efforts should now focus on story 1 which has just started an upward trend, instead of story 2 which is already on a downward slide — even if their rank by search volume were reversed.

Here’s another use case wrapped in an anecdote. Two of the topmost managers in a newsroom were having an email debate about whether or not a particular story should be the lead on their homepage. In a typical news meeting, this would have been an endless and very subjective discussion about whose news sense was more accurate. But in this age of data, manager A was able to take a screenshot of the Google Trends dashboard showing this as India’s second-most searched story in real-time and dump it into the thread. Manager B said no more.

That said, audience data can only inform and not dictate editorial decisions.

In some ways, Spike is a combination of the discovery aspects of both Signal and Curator. It clusters related articles from the top publishers in each country, then ranks them by social velocity, i.e., the rate at which they are being shared across social feeds. Often, it alerts you to a story that’s working for a competitor but is not yet on your news plan. At the sourcing dashboards workshop I mentioned earlier, Spike alerted a participating sports correspondent to an international kabaddi player’s death due to dengue. Both the sport and the disease are big in India.

The best illustration of its utility is NewsWhip’s people-powered front pages campaign that went viral last year. Do note that this is a freemium tool.

LinkedIn plays the trending game with Pulse, its news aggregator product that competes with the likes of Flipboard, Prismatic, etc. That’s consumer-facing discovery, not publisher-facing intelligence.

For the latter, try Newsle, which alerts you to news stories about or by the sources, experts or competing journalists you are either connected to or follow on key social media. Very frequently, this serves as a great funnel for story ideas.

So far, these tools have been about alerting journalists to new, rising or trending stories. But once you know the story you want to produce, can social tools help you find relevant experts and sources? The answer is FollowerWonk and similar tools that help you find social accounts that contain your keywords of interest in their bios, recent posts, etc. Check out my results page for sources on India’s pollution problem. 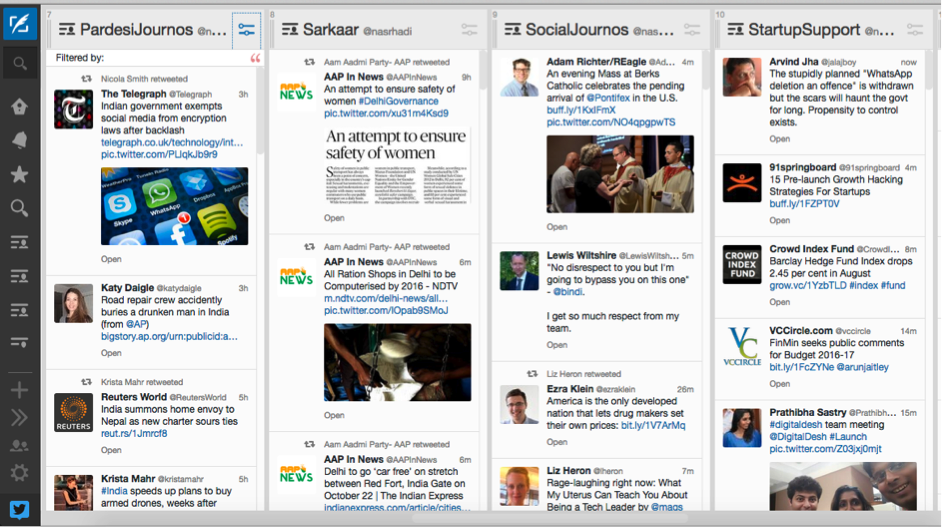 Good old TweetDeck is a great way to track all the action on your Twitter. But if you have invested in building or subscribing to the right lists around a particular beat, it can really help you make fewer calls for the three quotes you need in today’s assignment.

For instance, I have created a list of key entrepreneurs, investors, accelerators, media, etc., in India’s hyperactive startups ecosystem. More often than not, I first learn about a major announcement, acquisition, personnel or policy change from this stream. And while competing journalists would call several sources from their Rolodexes before they get a few who are willing to speak on the record and have diverse views on the topic, I could cherry-pick those who have already tweeted their reactions to the news and follow up directly.

I have always maintained that social lists around beats, recurring themes or even current topics are key to any news sourcing operation. Earlier this month, I led a session at the first #TwitterNewsSummit in India on using social data for news. Social media and engagement managers from across the country’s top newsrooms were introduced to Dataminr, which is basically lists on steroids. Personally, I consider this tool the fairest of them all, and have covered it in detail in a previous post.

The short of it is that it’s a discovery dashboard that works as both a sophisticated alerts system and a real-time search engine for tweets, images, videos, witnesses, or any other social content/data you need around a story. For now, they are powered only by Twitter.

Does your newsroom use a sourcing dashboard that’s not listed here? We would love to learn from your experience. Tweet at @IJNet or @nasrhadi to connect and let us know what we missed.