It’s no secret that women are underrepresented in the news, both as subjects and reporters.

Studies like the Global Media Monitoring Project and the Women’s Media Center’s 2019 report of women in U.S. media have shown how the industry continues to fall short in gender inclusion. According to new research published in September, COVID-19 coverage is no different.

In the “The Missing Perspectives of Women in COVID-19 News,” author Luba Kassova and her team at AKAS Ltd. explored women as sources of news and protagonists in news stories, as well as coverage of gender equality issues in reporting on the pandemic. The results highlight an absence of women in news, and little coverage of the issues that matter most to women as they navigate unique challenges during this global health crisis.

“It felt that it would be a lost opportunity to not understand how the story was covered — the biggest issue of our lifetimes,” said Kassova.

The research explores news production in six countries — India, Kenya, Nigeria, South Africa and the U.K. — during the early stages of the pandemic, from March 1-April 15, 2020. These countries were selected because of their large English-speaking audiences and geographic diversity.

The researchers, in collaboration with Media Ecosystems Analysis Group, analyzed more than 11,000 publications, public surveys, academic literature and public databases, and conducted a pronoun review of COVID-19 headlines. They were careful not to present the data in a vacuum. “Women have unique and profound challenges related to the pandemic,” said Kassova. “That makes the contrast with them lacking coverage of their views particularly painful.”

To clarify COVID-19’s impact on women, and the ways that different audiences consume news, the researchers included an opening section dedicated to the context into which the research was published. It explores the unique burden women carry globally during the pandemic, and the differences in the type of news they consume.

[Read more: The case for a gender editor]

Of the six countries included in the study, only South Africa achieved gender parity in their government’s COVID-19 decision-making committees. In the other countries, women were effectively left out of political power as it related to the pandemic. In England, for example, 100% of the members attending the daily COVID-19 meetings were men.

“The biggest and most devastating impacts and consequences of the fact that women's perspectives are so marginalized in the news about COVID is that they end up not being the subjects of policy making because their needs are not covered,” said Kassova.

The researchers also found that while men are more likely to die from COVID, women in some countries are more likely to fall ill, specifically in Wales, Scotland, Northern Ireland, English and South Africa. This may be because women are more likely to be frontline workers. According to the research, women make up more than 60% of each of the following around the world: personal care workers, health professionals and food preparation assistants. They are also more likely to be homemakers, therefore taking on the responsibility of caring for sick children or relatives.

Women are also more likely to lose their jobs, generally have a lower income and are at risk of increasing levels of gender-based violence.

Despite these challenges, or perhaps because of them, researchers found evidence to suggest that women in many countries are consuming news more regularly than they have in the past.

Researchers analyzed 80 key publications across the study’s six countries to determine how often women were quoted as experts or commentators, sources or protagonists in COVID-19 coverage from March 1-April 15, 2020. The findings are sobering: the percentage of quoted voices that belong to women range from 16% in India to a high point of just 25% in the U.K.

In comparing the percentage of women quoted in coronavirus coverage to non-coronavirus coverage, the report found that women are quoted less frequently in pandemic-related stories. Kassova hypothesizes that “status quo bias” wins out in times of crisis, deterring journalists from finding new sources, instead relying on old ones which more often are men. 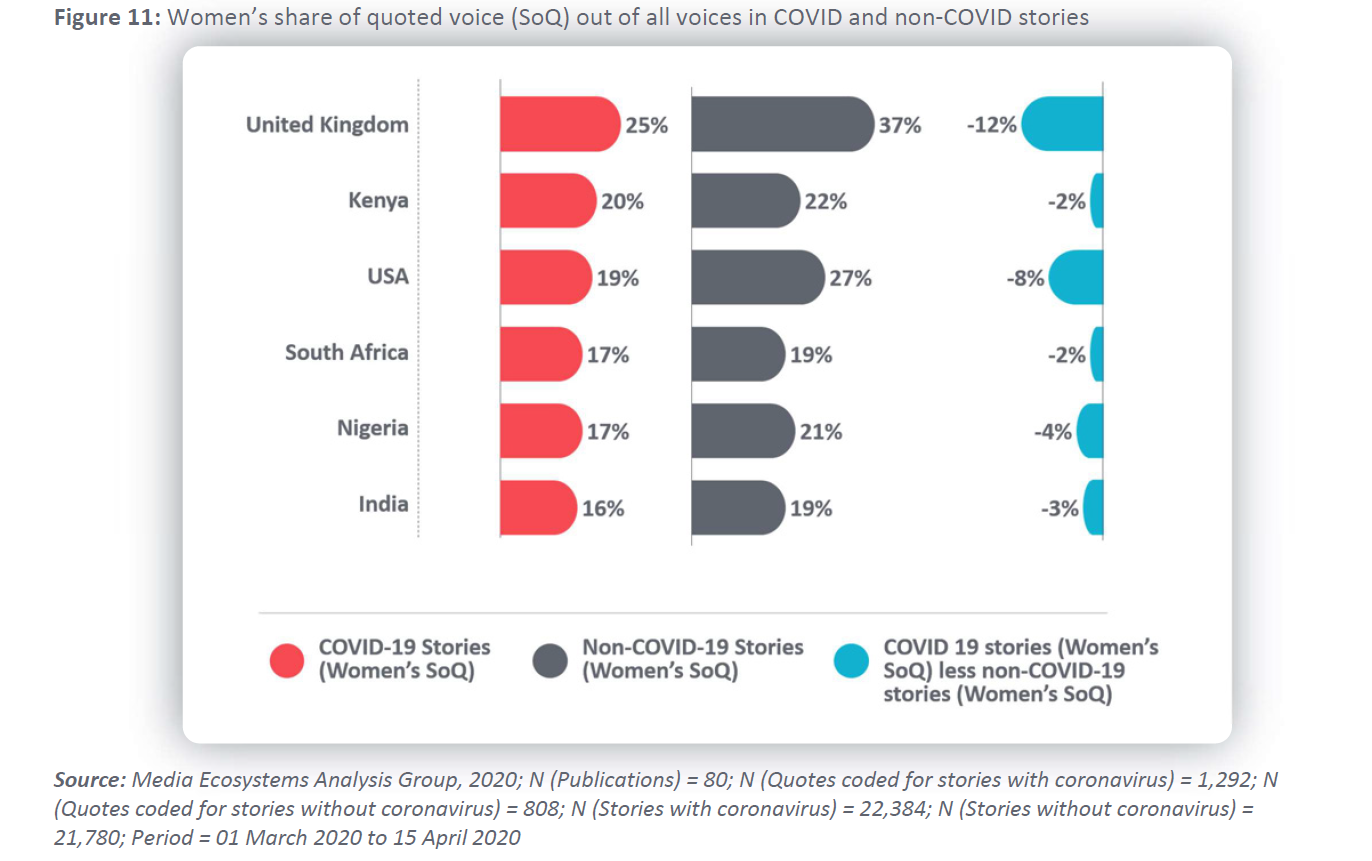 “It happens at the political level where men said, "Ok, we're taking over now. This is an important issue." And it happened on a scientific level where women scientists with decades of experience were pushed out,” said Kassova. “All of that was reflected in the news.”

When they were quoted, women offered subjective personal views more often than they did expertise. Across the six countries, men were four times more likely to be featured as experts and commentators.

Even when not being quoted, women still were less visible in news stories. Researchers found that over the selected timeframe, women featured as protagonists — individuals who are central to the story or whose comments or actions the story is built upon — in no more than 30% of news stories in the six countries. This number dropped even lower with COVID-19 stories. 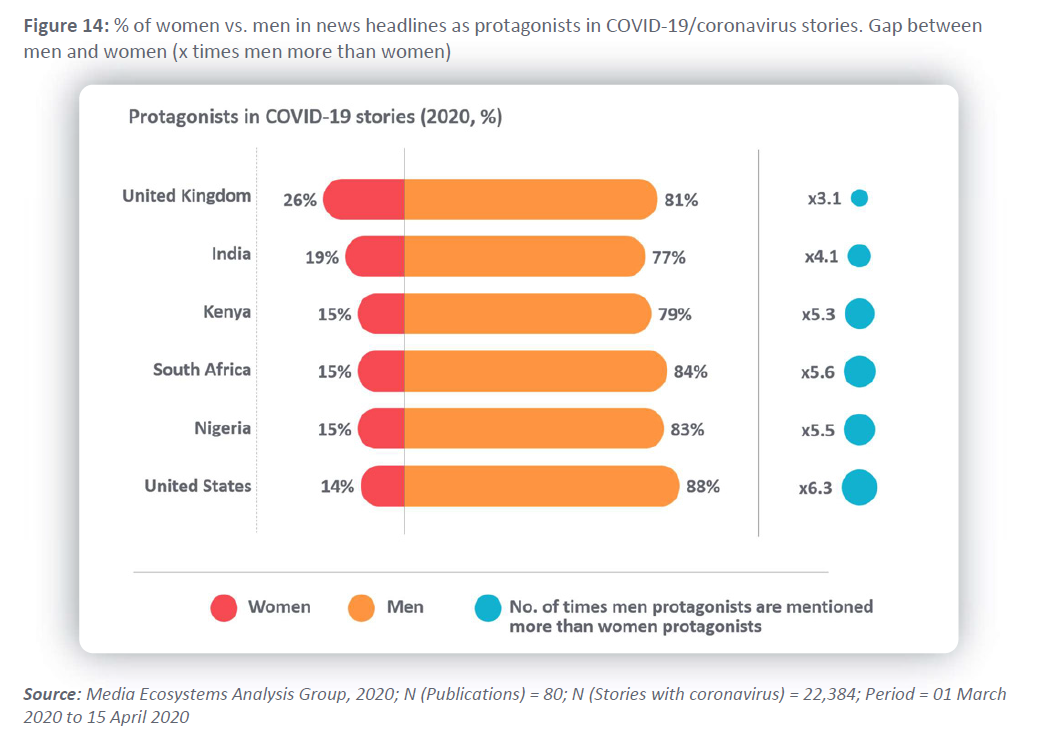 Despite the dismal picture the report paints of the status of women in COVID-19 news coverage, journalists and newsrooms can improve. Kassova concludes her report with 21 recommendations for news organizations looking to provide more gender-balanced coverage.

As many countries around the world contend with the long-predicted fall and winter surge of coronavirus cases, these recommendations can help news providers tell the stories that matter for women, and bring their voices into the fold.

“I was able to look at the evidence, but also understand the pressure points and the needs and the decision making of journalists,” she said.

First, Kassova recommends that journalists cover COVID-19’s impact on issues that may concern women more than men. This includes focusing more on unemployment, healthcare, poverty and gender-based crime. She also recommends that news providers focus more on personal stories, as these micro stories tend to be of greater interest to women readers.

Here are some key recommendations:

To read the full report, which is housed by the International Women’s Media Foundation, click here.

This report was commissioned by the Bill and Melinda Gates Foundation. It is a precursor to a larger report, which will be released soon.

Taylor Mulcahey is the editor of the International Journalists' Network.